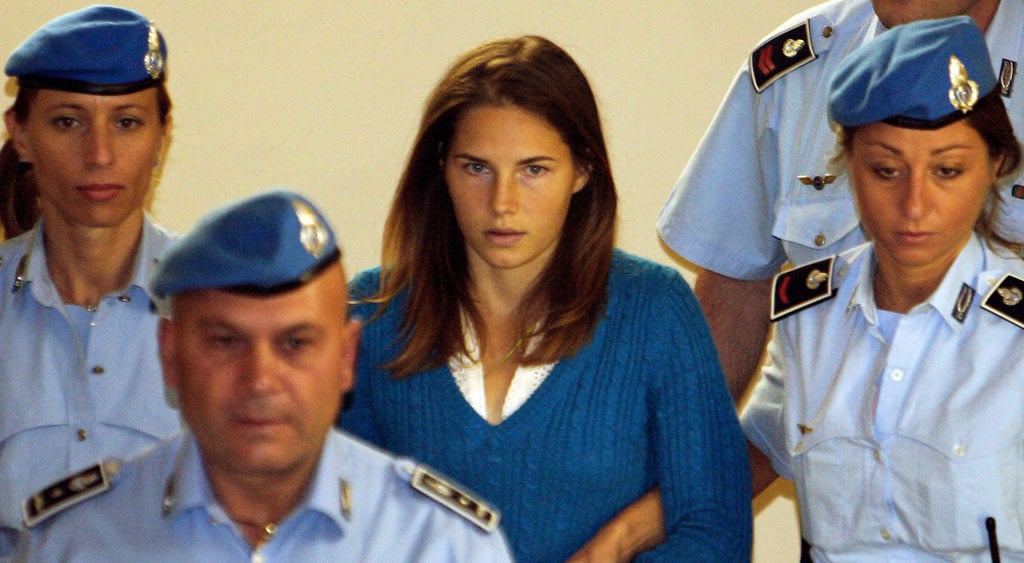 In 2007, Amanda Knox went from a regular college student to a infamous murder suspect after her roommate was found dead in their shared apartment in Perugia, Italy. Knox, who was studying abroad at the time, quickly became a media sensation after her strange behavior led police (and the public) to suspect she was guilty. The victim, 21-year-old English student Meredith Kercher, was found beaten and stabbed to death, with the fatal injury being a blow to her neck by a pointy and sharp object. She was also sexually assaulted. Knox went on to be tried for Kercher's murder twice, but was eventually acquitted in 2015. Before you watch Netflix's documentary about the case, Amanda Knox, catch up on the murder's most confusing and heartbreaking facts.

Meredith Kercher was found in a pool of her own blood on Nov. 2, 2007 by Amanda Knox, one of her roommates in the four-bedroom apartment in Perugia. She had as many as 40 stab wounds over her half-naked body, which was covered by a duvet blanket. Before Kercher's body was found, Knox had returned home to their apartment and said she noticed a few drops of blood and a bloody footprint in their shared bathroom. Instead of trying to check on Kercher, Knox returned to the house of her then-boyfriend, Raffaele Sollecito. Later that day, after not being able to get through to Kercher on her cell phone, Knox called one of the Italian men who lived on the lower level of their shared home. He eventually kicked in Kercher's door and he, Knox, and Sollecito discovered her body.

Knox quickly became the enemy in the eye of Italian police and a lot of the public due to her strange behavior in the weeks that followed the murder. In addition to looking carefree while buying sexy lingerie and making out with her boyfriend in a store, Knox also made a harsh comment about the brutal killing, saying, "She got her f*cking throat slit." It was also reported that she did cartwheels in between being interviewed at the police station, something she says was just a reaction to a very "confusing and terrifying situation."

One theory about Kercher's murder that was widely reported was that she was involved in a sex game with Knox and two other Italian men. After she refused to participate, the three killed her in an effort to cover up what happened.

Following the murder, Ivory Coast immigrant Rudy Guede, an acquaintance of Kercher's, fled Italy. His fingerprints and DNA were found in Kercher's room and on her body, and he was convicted of the murder and sexual assault after being granted a fast-track trial. He originally said he had sex with Kercher and then came out of the bathroom to find a strange man standing over her with a knife, but later changed his story to fit the prosecution's, saying it was Sollecito and Knox participating in a sex game gone wrong. He is currently serving his 16-year prison sentence.