Once Upon a Time is full of twists and turns this season. Not only did it throw us for a major loop with the Dark Swan plot, but the show also added a few new characters to its roster. One of the most anticipated, of course, was Scottish actress Amy Manson's appearance as Merida, from Brave. Just like the fiery Pixar heroine, Manson quite literally made her mark on the show. And if you loved her portrayal just as much as we did, then you're in luck. I got the chance to talk to Manson and she revealed that Merida's storyline may not be finished quite yet. Keep reading to see what her favorite scene from this season is and which cast member she thinks could fill her shoes as Merida. 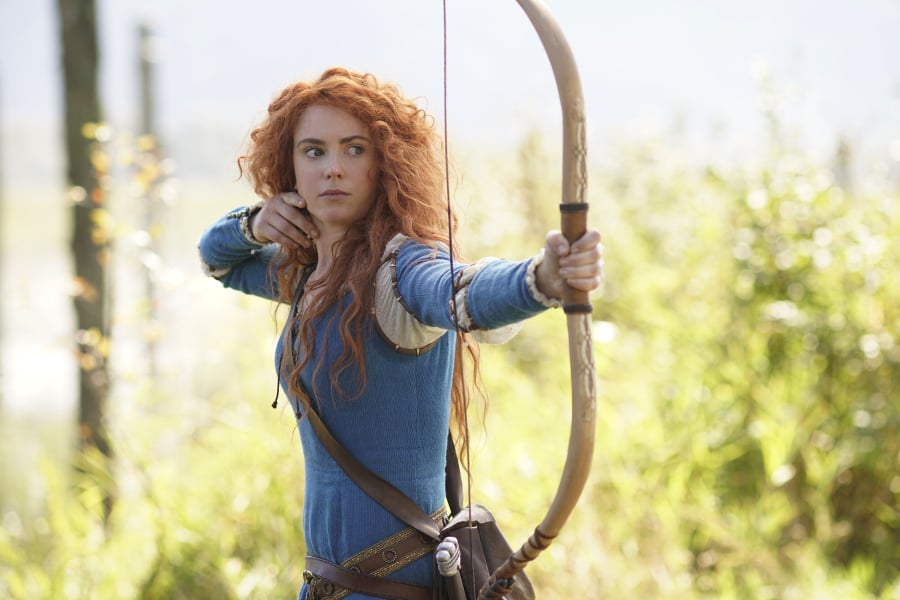 POPSUGAR: How did you prepare for this role?

Amy Manson: Yeah, oh golly. I guess half the battle is understanding where the character comes from. And it was slightly easier for me being Scottish and the character being a Scott. I just kind of honed into that and just tried to remember the spirit of the land and how that kind of determines you as a person and the character. So that was half the battle. I guess turning up on set was the next one and getting your lines is the biggest part. Everyone was lovely on set. I had my first scenes with Jen Morrison and she was so great and she understood it was my first time working in the States, or kind of the other side of the Atlantic, and so, she was great. And then, obviously the archery for Merida is a huge part. She would be an Olympian if she lived in today's world. And having been given a bow and arrow by her father at such an early age, I honed in on that and wanted to get down the specifics.

PS: How would you say that Merida's portrayal in the show is similar or different from her Disney character?

AM: Well, it starts 10 years later. So, I've changed as a person in the last 10 years and that's what you have to think. And I guess having her dad die. That must be one of the worst things to happen to a human being, to lose one of their parents. The scene pained me to try and get into that headspace. So, that's something that she's gone through that the audience hasn't seen. And then, to see her when she's on a mission to get her brothers back, to save her family, and her family name. So, all of that together is going to change a person, but she's still got that vibrant spirit. It comes out further along the series, which I was so happy about. But, I think they're quite similar in some respects. I watched the movie a lot to get into Merida's headspace and I can say half the battle is being Scottish. I'm so glad they did cast a Scott.

PS: What was it like being the newbie on set?

AM: Oh god, it was great. You worry as an actor every time you start a new role. And I guess in the UK, we have what we call table reads. So, before, even if it's a new season, you'll sit down with all the cast members, and your directors, and your producers, and read the first episode, at least, if not the first two. So to not have that and just be thrust into it, you just get a bit nervous because you've not met anybody. But I guess it's just a well-oiled machine in that sense. Everybody coming and going. Their schedules worked so well, so it was nice to get to work with everyone after being a fan of the show myself.

PS: Who is your favorite Storybrooke character?

AM: I'd probably say Lana [Parrilla]'s character, the Evil Queen. She's just so amazing. She's such a great chick. She keeps it real and I think out of all the cast she'd be the only one who could play Merida. That whirlwind, that gust of energy, and the language could be a big cheese fest, but she just makes it so crisp and clear.

PS: Who was your favorite person to work with?

AM: Emilie [de Ravin] and I became quite close during our episode and also Mulan too. I loved Jamie [Chung]'s work ethic and the same with Jen. They were the first ones on set every day before anybody else and that's how I work back in the UK. It's just more time to practice certain things. And seeing that Mulan and Merida had more action, it was nice to be there on set earlier and to make time for it.

PS: How would you describe the relationship between Mulan and Merida?

AM: There's a lot of history between Merida and Mulan. Mulan taught Merida everything she knows about being a warrior. They're very similar characters. They're probably better with a bow and arrow or a sword than any of the guys that exist in their realms. So I think there is a mutual respect between the two of them, which we find during filming as well. I don't think Merida lets many women in either. She's surrounded by a lot of males, just because of where she's from, and that's the system and hierarchy, and then Merida comes in a shakes all of that up. She has to prove herself, which she does so brilliantly. And she gains everyone's respect.

PS: What was your favorite scene to film this season?

AM: I'd probably say with Mr. Gold, with Robert [Carlyle]. I like the way she's just teasing him and just the spunk that she had there. Obviously, Emma's controlling her, so that's another thing I had to think about, but it was nice to just be a woman saying to a man, "Stop feeling sorry for yourself." And to see Robert getting so deep into that side of his character was a great scene.

PS: Other than being "brave," what would you say is Merida's strongest asset?

AM: Just the fact that she speaks her mind. She just says it as it is. There's nothing spared. She just likes for people to be real and fight for what they believe in.

PS: Will we see Merida in any future episodes?

AM: I have personally been asked to come back, so I'll be doing something next year. And I'm so glad because I love playing Merida.

PS: Do you have any speculations or hopes for how your character might return?

AM: I guess, coming back with Belle. Those were good scenes because in the last five seasons she never had a female comrade. And I enjoyed watching those scenes between the two of them.

Image Source: ABC
Once Upon A TimeTVCelebrity Interviews

Netflix
An Update on Where Dr. Donald Cline From "Our Father" Is Now
by Pallavi Bhadu 21 hours ago