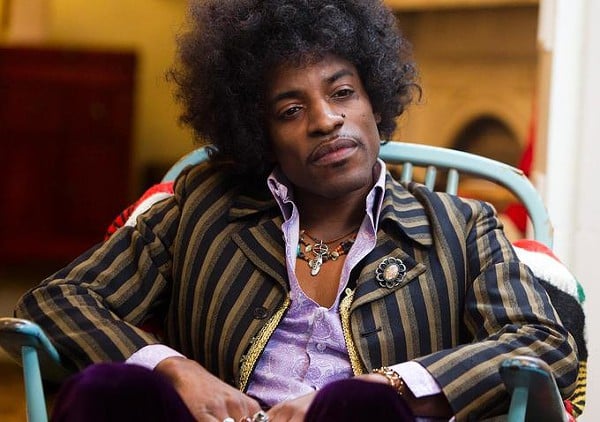 Outkast's André 3000 portrays the late, great Jimi Hendrix in the upcoming biopic Jimi: All Is By My Side, and an official trailer for the film was released on Thursday. The movie was written and directed by John Ridley — who recently won an Oscar for his work on 12 Years a Slave — and follows one year of Hendrix's life (1966-67) as he goes from unknown NYC backup guitarist to rock 'n' roll legend after making it big on London's music scene. The flick hits theaters on Sept. 26 and also stars Imogen Poots and Hayley Atwell, who plays Hendrix's longtime muse Kathy Etchingham. Watch the trailer below and let us know: do you think André 3000 nailed it as Jimi Hendrix?

Netflix
Regé-Jean Page, Ryan Gosling, and Chris Evans Are in a Movie Together — Need I Say More?
by Monica Sisavat 8 hours ago

Netflix
On Our Radar: Alycia Pascual-Peña Has All the Moxie Needed to Make a Change
by Grayson Gilcrease 10 hours ago