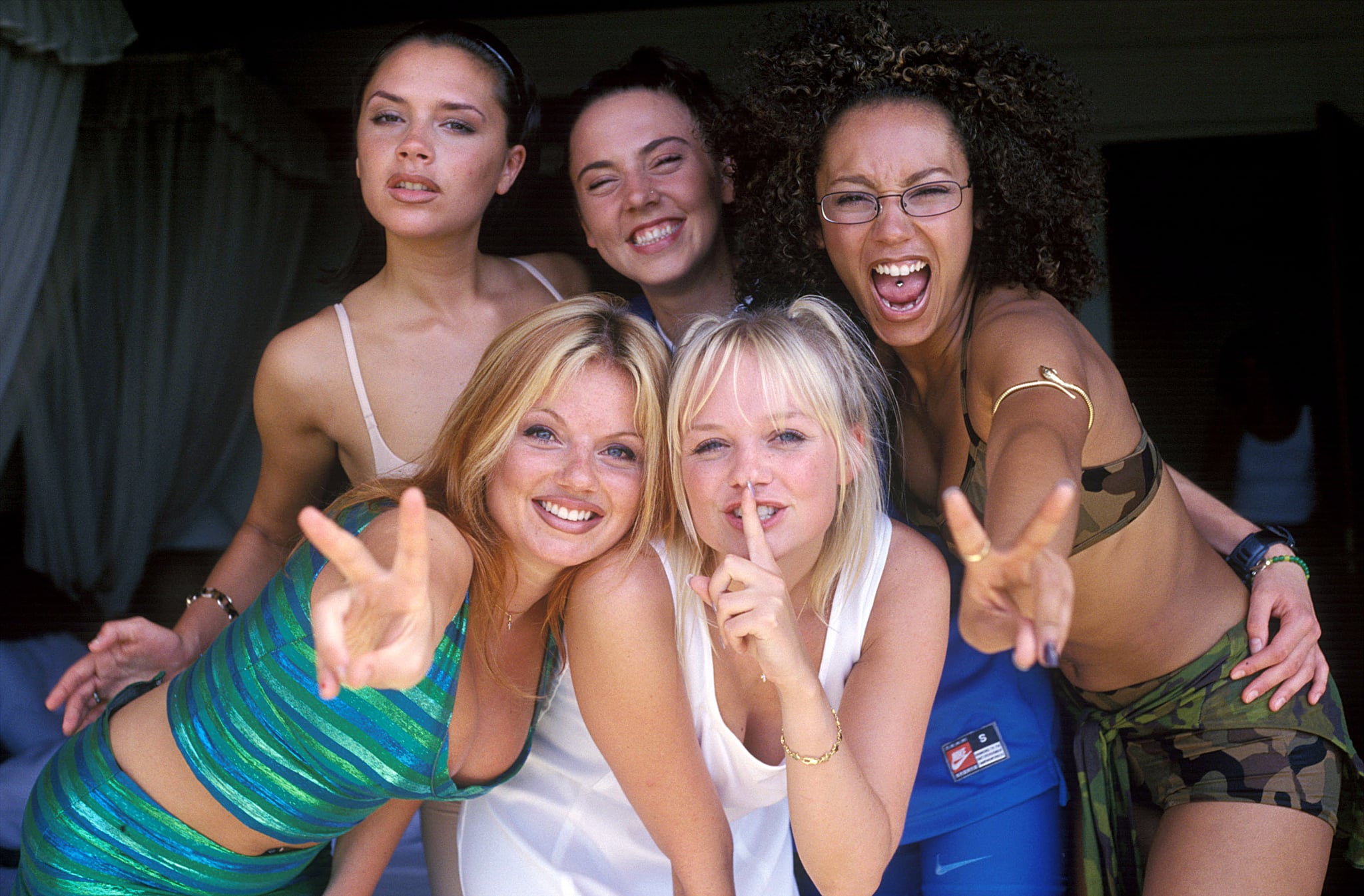 It's hard to believe that we were bopping our heads 20 years ago to songs like "I'll Be Missing You," "The Freshmen," and "Coco Jamboo," to name a few (shout out if you remember the last one well, like I do). It was a magical year for the music industry, in that 1997 was still a time where every single genre was invited to the table and brought back for seconds and thirds. Make sure you're hungry, because we're about to serve you some delicious throwback jams that will leave you full — and jonesing for that old CD player you left at your parents' house years ago.

In the mid-'90s, we saw a huge decline in what is considered "pop" music as the grunge and hip-hop scene made its way to the top of the charts and left the pop princes and princesses in the dust. A year before, in 1996, a little-known girl group named The Spice Girls came blasting on the scene with their first hit: "Wannabe." It led to a huge pop explosion all over the world and gave many boys and girls the option to figure out which Spice Girl they were (I was Ginger, of course). This led them to have a monster year in 1997, with hits like "Say You'll Be There" and "2 Become 1," while on the flipside of things, we saw the boy band phenomenon make its way back into the scene with five guys from Orlando, FL, and a trio from Tulsa, OK.

They, of course, were The Backstreet Boys and Hanson, respectively. Was there anyone who didn't listen to or know the song "MMMBop"? Seriously, it was everywhere, and there was a massive cohesion of screams from girls for these three dudes who were an actual band. On the other hand, you had The Backstreet Boys just coming into play with the hit "Quit Playing Games (With My Heart)," further elevating the screams as we found a spanking-new edition of New Kids on The Block. It was these artists that parlayed success for others in the years to come, notably names like Britney Spears, Christina Aguilera, *NSYNC, and many more.

Related:
Try to Read This List of '90s Boy Bands Without Saying "I Totally Forgot About Them"

Sure, pop made a comeback, and you can't deny the female spirit that was in the air during this glorious year. The dominance of women throughout 1997 was huge in genres that spanned everything from country (LeAnn Rimes, Shania Twain) to pop rock and folk (Jewel, Sarah McLachlan, Sheryl Crow) and all the way to hip-hop (Missy Elliott, Lil' Kim). Was I the only one who would listen to Jewel's "You Were Meant For Me" on a cloudy day, sipping on some coffee? Or belting "How Do I Live?" by LeAnn Rimes in my room with a fake microphone? Granted, I was 11 at the time and maybe I'm being a bit melodramatic, but come on! These songs rock and are reminiscent of a great time in music when popping in Celine Dion's "Falling Into You" made for a pretty memorable Saturday afternoon. Oh, and Celine did kind of release that song from that movie with the ship and Jack and Rose. Not sure if ANYONE remembers that, though.

That year — and McLachlan — also brought us The Lilith Fair, which celebrated women in music and did so for years to come. Want some real nostalgia? The main lineup for the original Lilith Fair included women who made a massive dent in 1997, including Meredith Brooks and her blunt as hell track "B*tch"; Fiona Apple, who was feeling like a "Criminal"; Paula Cole, who was wondering "Where Have All the Cowboys Gone?"; and Shawn Colvin, who pondered when "Sunny Came Home." The female singer-songwriters were powerful in 1997, and the reflection on it 20 years later is still as strong as ever.

Related:
The Albums Every Alt-Girl Owned in the '90s

Regarding other women in music, R&B was smooth as butter in the '90s, especially in 1997. We all fawned over Tyson Beckford in Toni Braxton's video for her smash hit "Un-Break My Heart" and jammed with Mariah Carey on the drippingly perfect "Honey." We felt the soul with Erykah Badu's "On and On" and Janet Jackson's remake of Joni Mitchell's "Got 'Til It's Gone," and got down and dirty with the guys on Usher's "You Make Me Wanna," Dru Hill's "In My Bed," and LSG's "My Body." The feels were all over the place for R&B. Whether you wanted to tap your feet, slow dance with your partner, or dance the night away, this genre had you covered.

Remember when dance music was called . . . dance? That year gave us so much life in the world of dance, where Daft Punk took us "Around the World," Gina G gave us "Ooh Ahh Just a Little Bit," Crush scolded our boyfriends with "Jellyhead," and The Prodigy both freaked us out and made us dance the night away with "Breathe." Oh, and please let's not forget Aqua's "Barbie Girl." Or maybe we should? Kidding, how can we ever forget a track like this that equally made us dance/annoyed the heck out of us after a while?

If there was a king of rap in 1997, it was no doubt Puff Daddy (. . . & The Family). There was truthfully no bigger act that year than this group of rappers that included Puff Daddy, Mase, and of course the legendary Notorious B.I.G. Whether you were cruising down the highway to Biggie's "Hypnotize," getting inspired by Puff & Mase's "Can't Nobody Hold Me Down," or repeatedly singing "bad, bad, bad, bad boy" on Mase's "Feel So Good," this group capitalized on rap and hip-hop that year and were triumphant in doing so.

They weren't the only ones to eat at the rap and hip-hop table, though, as we were introduced to so many amazing new talents, including Missy Elliott, who served up some garbage bag couture in the video for "The Rain," and Busta Rhymes in "Put Your Hands Where My Eyes Can See." Big Pun convinced us he was "Still Not a Player," Lord Tariq and Peter Gunz took the 6 train to "Déjà Vu (Uptown Baby)," and we saw the return of Will Smith with his signature shades for "Men in Black."

Rock music is a genre that is today fighting for its place in the industry, but it dominated the heck out of the '90s, especially '97. It was a sweet year for rock music, where the hits were endless and unique to boot. Who ever thought that combining "Sex and Candy" could actually work (besides Marcy Playground)? The Verve's "Bitter Sweet Symphony" is memorable in so many ways, including its lead singer walking into everybody and everyone throughout the duration of its music video. We were introduced to Matchbox 20 with "Push," Third Eye Blind with "Semi-Charmed Life," and The Wallflowers with "One Headlight," while legends continued to churn out rock smashes like The Foo Fighters's "Everlong" and Garbage's "#1 Crush." And yes, the world of rock gave us Chumbawamba and their song "Tubthumping," where for the longest time I thought they were singing "I get no town" instead of "I get knocked down." Granted, now I know the song is about getting drunk, but hey, it was a more innocent time for me.

Related:
9 Song Lyrics From the '90s That Made Absolutely ZERO Sense

Country music in 1997 was an equal playing field for both men and women, and sometimes they even joined forces to make a huge hit. Case in point: married couple Faith Hill and Tim McGraw with their classic "It's Your Love" and Trisha Yearwood and Garth Brooks's hit "In Another's Eyes." Shania Twain reminded us that "Love Gets Me Every Time," Pam Tillis thought that "All the Good Ones Are Gone," and Deana Carter asked "How Do I Get There?"

We were also brought a year of reflective and somewhat melancholy hits with a message, including songs about ones who tragically passed, including Elton John's "Candle in the Wind 1997" for Princess Diana and "I'll Be Missing You" by Puff Daddy and The Family for The Notorious B.I.G. In a similar sentiment, you saw a ton of uplifting songs make their way to the radio and our heads, like R. Kelly's "I Believe I Can Fly" and Eric Clapton's "Change the World."

So, did all of this fill you up? For more nostalgia, check out the Spotify playlist of some of my favorite songs from the year while reminding yourselves that this was when Rachel and Ross were on a break.

Lil Nas X
Lil Nas X Pauses Concert Due to a Bathroom Emergency: "I Was Literally Back There Dropping Demons"
by Sabienna Bowman 21 hours ago