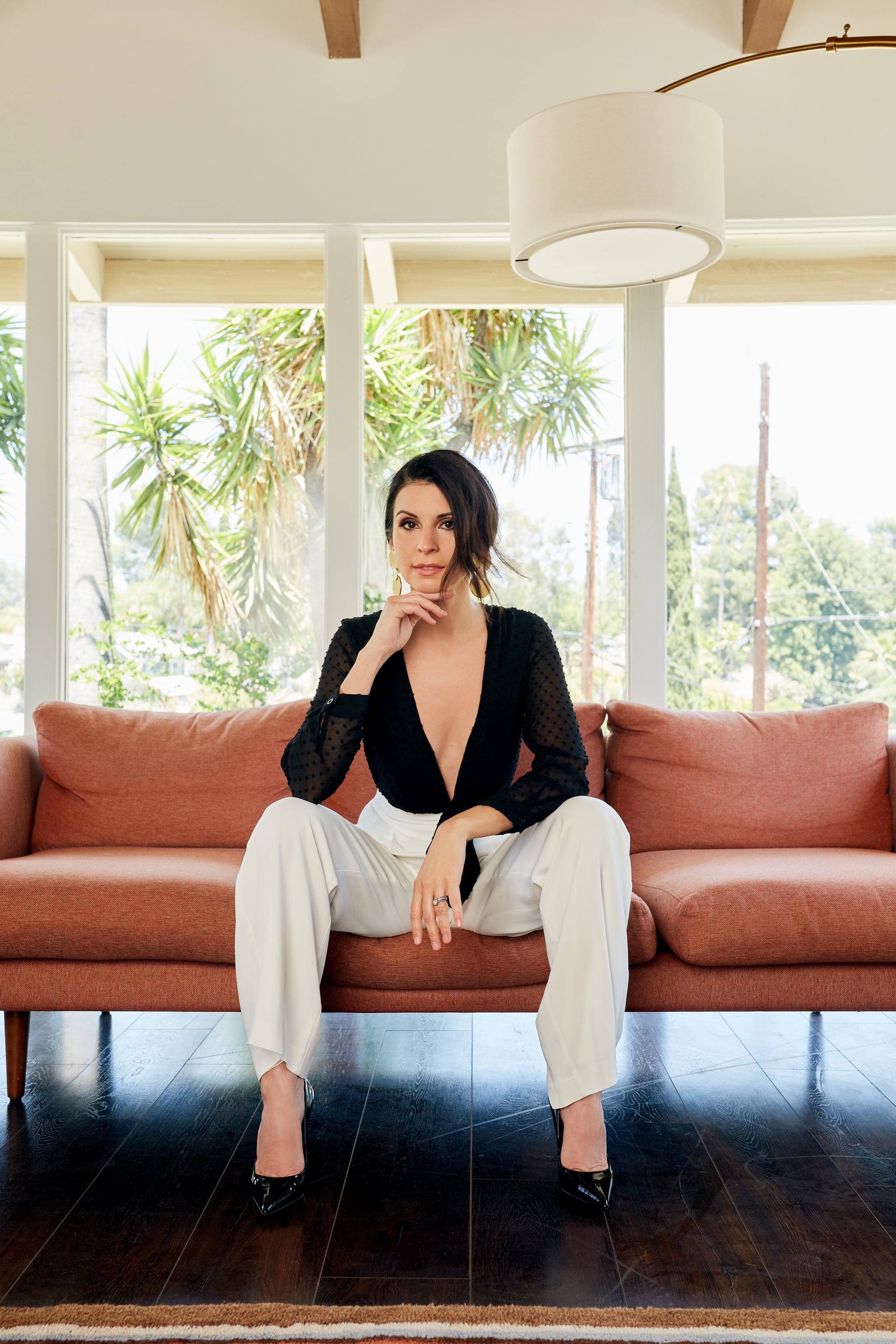 Orange Is the New Black takes more than a few painfully real twists in its final season. While they can be difficult to watch, Beth Dover, who plays Linda Ferguson, says they were just as difficult to shoot. In between practicing her catwalk for New York Fashion Week and preparing for her leading role in her husband Joe Lo Truglio's upcoming horror film Outpost, Dover hopped on the phone to talk to us about what it was like to play one of the most notable villains on a show that addresses so many relevant political and cultural issues. "It's a good reminder that villains don't always have to be super scary-looking to be effective," Dover said.

While Linda might not seem like she's pure evil at first glance, with her perfectly coiffed hair and put-together skirt suits, that all changes the minute she opens her mouth. From excitedly showing Figueroa around the ICE Detention Center to revealing that she chose Tamika to be Litchfield's new warden as a "diversity" hire, the show makes us wonder more than once if Linda has a soul. Ahead, Dover tells us why those qualities truly make her character one of the show's most terrifying antagonists, how being a part of the show made her more politically active, and what it was like to be on set during the last day of filming.

Warning: Orange Is the New Black season seven spoilers ahead!

Related:
Here's How and Where All of Your Favorite Orange Is the New Black Characters End Up

POPSUGAR: Let me start by saying that I just finished watching the new season, and it was my favorite by far.

Beth Dover: I haven't gotten through the entire season yet. I have a 3-year-old at home, so half the time is spent watching Peppa Pig and things like that. But I'm halfway through, and it's been emotional, I'll tell you. I've been crying a lot.

PS: Prior to being cast on Orange Is the New Black, were you a fan of the show?

BD: Oh, I was a giant fan of the show! I was binge-watching it just like everyone else when it first came out. When I got the part in season three, I thought I was just doing one episode. They cast me as a local hire; I flew myself out, put myself up. I basically paid to be on that first episode because I was such a fan of the show. I thought, "Yes, this is one of my favorite shows of all time. Fantastic. I'll do one episode. Great to check that off my bucket list," and then here I am five seasons later. So it's been a wild ride. I'm super grateful. I kind of can't believe it. Every season, I'd be like, "Am I still going to be on the show?" And then here I am. It's been awesome.

PS: Who would you say is your favorite character, apart from Linda?

BD: If you asked me on the day, it's different characters every time. But listen, Nicky, Natasha Lyonne, she's fantastic, just as a human being. I could watch her read the phone book and be very happy. But gosh . . . just seeing Laverne Cox and how much her being on the show just has transformed television in general in terms of just casting trans actors for trans roles and just . . . I feel like our little show has made a really huge impact on how we cast things now, and also just showing different stories of more marginalized people or underrepresented people.

PS: Linda, in particular, is an interesting character. She isn't the only villain on Orange Is the New Black, but she is one of the most terrifying, and I definitely think it's because she's such a realistic character. It's easy to imagine Lindas actually running prisons all over the country.

BD: Well, that's what I feel like you realize about Linda. It's like villains are walking among us, and they look pleasant and sweet, and they're wearing nice pumps. And they're socially able to kind of walk among us and basically wreak havoc on the planet. It's a good reminder that villains don't always have to be super scary-looking to be effective villains.

PS: How has knowing this about the character affected how you approach playing her?

"I think she's out for blood, but she does it with a smile."

BD: Jenji [Kohan] gives us the scripts the week before we shoot it, and so I didn't know that Linda was going to become such a villain. I really just thought she was sort of a socially tone-deaf white lady. You know what I mean? I just thought she was sort of annoying more than anything, and so that's sort of how I played her . . . I think at her core, she's a survivor, and she's making decisions based on her own selfish needs. And also, I think after season five, her desire for revenge and just to screw it — any ounce of nicety that she had before — it died when Caputo wouldn't let her out of the prison. I think she's out for blood, but she does it with a smile.

PS: Do you think there is more to her backstory that would maybe explain why she is the way she is?

BD: I think she was, in her childhood, an eager-to-please, good student type of person, and maybe didn't always get her fair shot, or maybe she was bullied, or who knows? But you see a little bit of that [in the flashback], where she's really trying to fit into the sorority, and then you see what comes to pass and how she lies to the police officer. And I think that's sort of where things shift, because she comes into power in that sorority . . . That's sort of how she's living her life from that point on, just looking out for number one and just making it work any way she can. PS: What did you think happens to her after season seven? I kind of expected her to "get hers," and I was disappointed when she didn't.

BD: It kind of is left open in a way. I think what will happen is she'll probably rise even further up in the ranks of PolyCon. I don't know that she's going to get her just desserts. I think sometimes villains stay villains and are incredibly successful, and sometimes they get nominated President of the United States. So there's not always that satisfying ending . . . because villains are still out there, and sometimes nothing bad ever happens to them, which is a bummer.

PS: Speaking of people in power, the series goes to some really dark places, and I know Linda plays a big role in managing Litchfield and the ICE Detention Center. Was it difficult to go through those scenes with our political climate right now?

BD: I would say it was really difficult to walk into that room when I'm showing Fig around the ICE Detention Center because it was filled with hundreds of backgrounds, some in orange, some in red, and I'm coming in there just nonchalantly, flippantly telling her everything. It was emotional because I know that this is actually happening right now in real life . . . But I'm an actor. I had to play the scene. But at first, I was like, "Wow. This is crazy because this is currently happening." So, yeah, it took me back for sure . . . I definitely had to be like, "OK, [go] back into Linda mode and act," because it was intense to think about . . . But it's good that it's getting shown and it's part of a cultural conversation because that's how change can take place. I think that's what's great about this show. I think that it really has changed not only the landscape of TV, but I think things are crazy right now in the world and the United States — I just think to have a show like this can maybe help bring about some change in some small way.

PS: What was it like being on set during your last day of filming?

BD: In general, getting to be in New York and getting to be a part of the show is just fantastic. Also, just that last day, hugging everyone and thanking everyone, I just felt such an overwhelming sense of gratitude, and my heart grew three sizes, honestly, that day. I was like, "Oh my God. I can't handle it. My emotions are too big." So that was both a joyful and a bittersweet, sad moment, that last day, for sure . . . Getting to be a part of the show has been such a life-changing thing for me on so many levels. 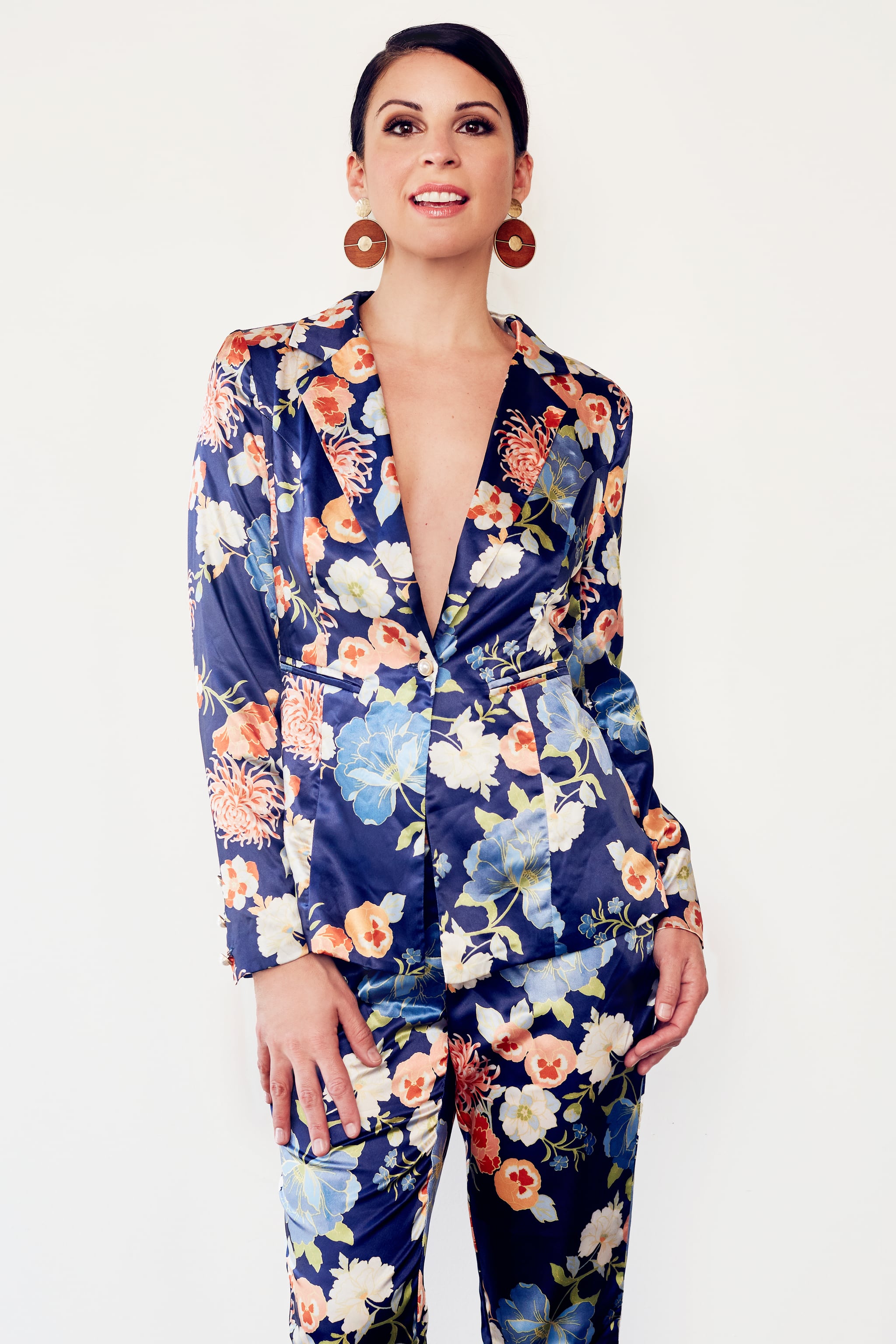 PS: In what ways has the show been life-changing for you?

BD: Well, I think just being more politically active, being around such politically active women on the show has turned me into more of an activist than I was in the past, and just not being silent about things that I believe in . . . My life has changed so much since I shot that first season. I got married. I had a kid. I bought a house. All this stuff. So, it's been a nice little time capsule of a lot that has happened in the past five years.

PS: What's your takeaway from being a part of the Orange Is the New Black cast, after all this time?

BD: Oh my gosh. I think that this show touches on so many important issues and is able to put a human face on these issues, that we can just sort of say, "Oh, well, that's not me. That's not my problem." And just to realize it's everyone's problem because we're all part of the human race, you know? And so there's that, and just a general shift in the cultural conversation and opening up to diverse groups of people and underrepresented people. And I think for me, that's the most important takeaway from the show, is just opening people's eyes to things that are actually happening in society and humanizing it so that people can empathize.

You can binge all of Orange Is the New Black's final season on Netflix now.