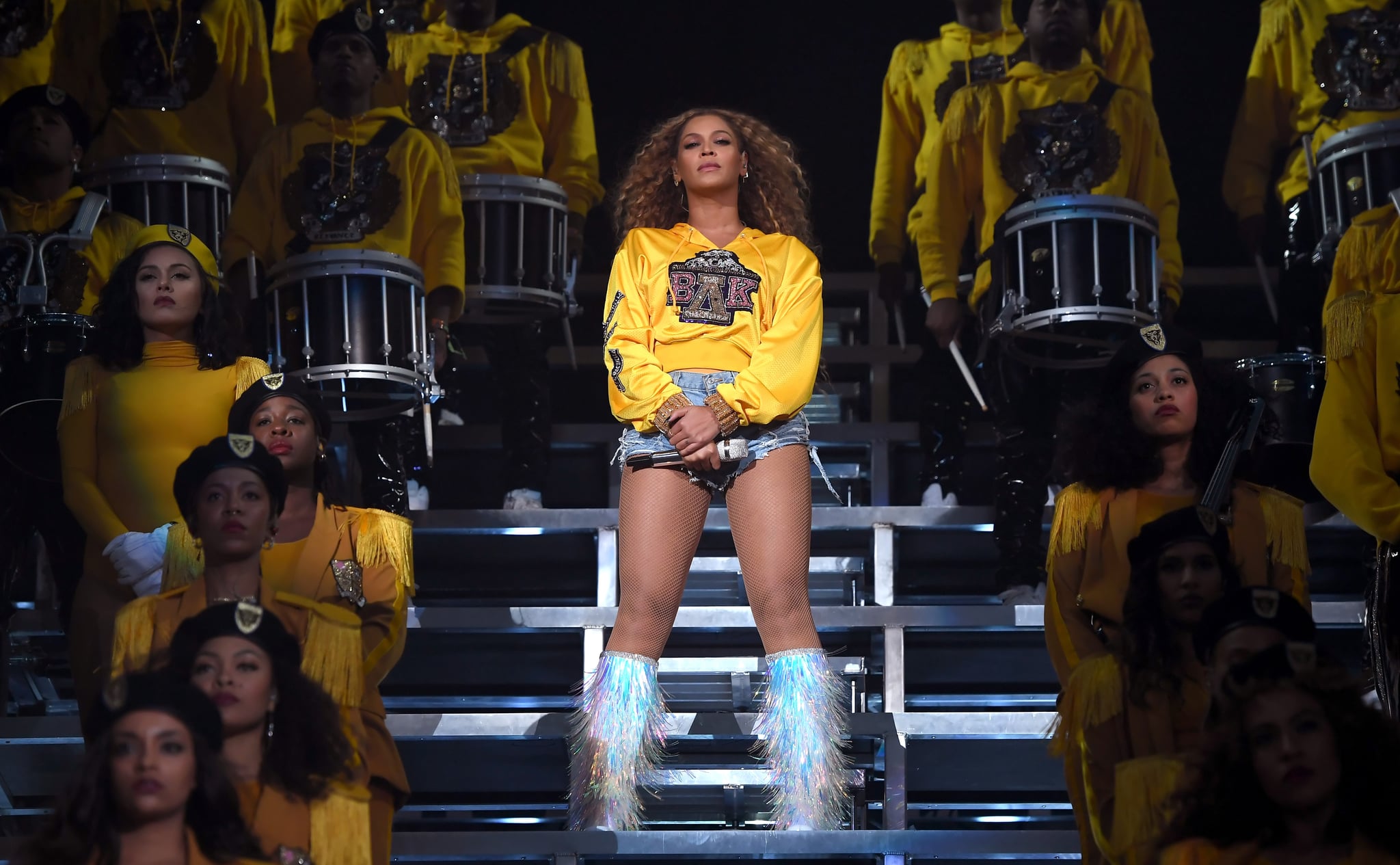 Beyoncé turned Coachella upside down on Saturday night as she took the stage in Indio, CA. The singer and mother of three — who made history as the festival's first black female headliner — electrified the crowd with massive hits such as "Sorry," "Freedom," "Drunk in Love," and "***Flawless," plus some older classics including "Crazy in Love," "Déjà Vu," and "Baby Boy." Clad in costumes by Balmain and accompanied by a New Orleans-style brass marching band, Bey filled the stage with black backup singers, dancers, and band members, and paid homage to HBCUs with her university-themed set and step-inspired choreography. In an especially poignant moment, the superstar launched into the Negro national anthem, "Lift Every Voice and Sing," before transitioning into the #BlackGirlMagic anthem "Formation."

Related:
Good Luck Keeping Up With All These Fun Snaps of Stars at Coachella!

Before she moved into "Déjà Vu," JAY-Z made a cameo to rap his part of the 2006 hit. Bey's sister, Solange, also made an onstage appearance for a dance break during "Get Me Bodied." Rumors emerged this week that Beyoncé had a Destiny's Child reunion planned for her big performance, and she delivered — Kelly Rowland and Michelle Williams joined her on stage to sing "Say My Name," "Soldier," and "Lose My Breath," sending '90s babies into hysterics.

Related:
In Honor of Homecoming, Look Back at Beyoncé's Incredible Coachella Performance in Pictures

Beyoncé was originally scheduled to headline the annual music festival in 2017, but had to postpone the gig because she was pregnant with twins Sir and Rumi Carter. This time around, she made sure to show her maternal side while getting fans riled up for the event; on Saturday morning, Beyoncé posted a rare message to her Facebook page, telling her devoted BeyHive to "please be safe and stay hydrated" ahead of her set. "We need your energy!" she said, adding, "Mark your spot, charge your phones, grab your drinks." A considerate queen.

Coachella
Missing Music Festivals? These 15 Are Happening in 2022
by Divya Meena 3 hours ago

Food News
Shocker: Cooking Your Chicken in NyQuil Is an Awful Idea
by Theresa Massony 5 hours ago