Johnny Depp is known for fully transforming into his roles, though instead of becoming a drunken pirate or a wide-eyed Mad Hatter, he's playing a real person in the mobster movie Black Mass. Depp has taken on the role of Whitey Bulger, one of the most well-known gangsters in American history. We could barely believe our eyes when we saw pictures of Depp in character, but the story behind the new movie is infinitely more shocking. Here's everything you need to know about James "Whitey" Bulger, the man responsible for at least 11 murders — though his true death toll will probably never be known. 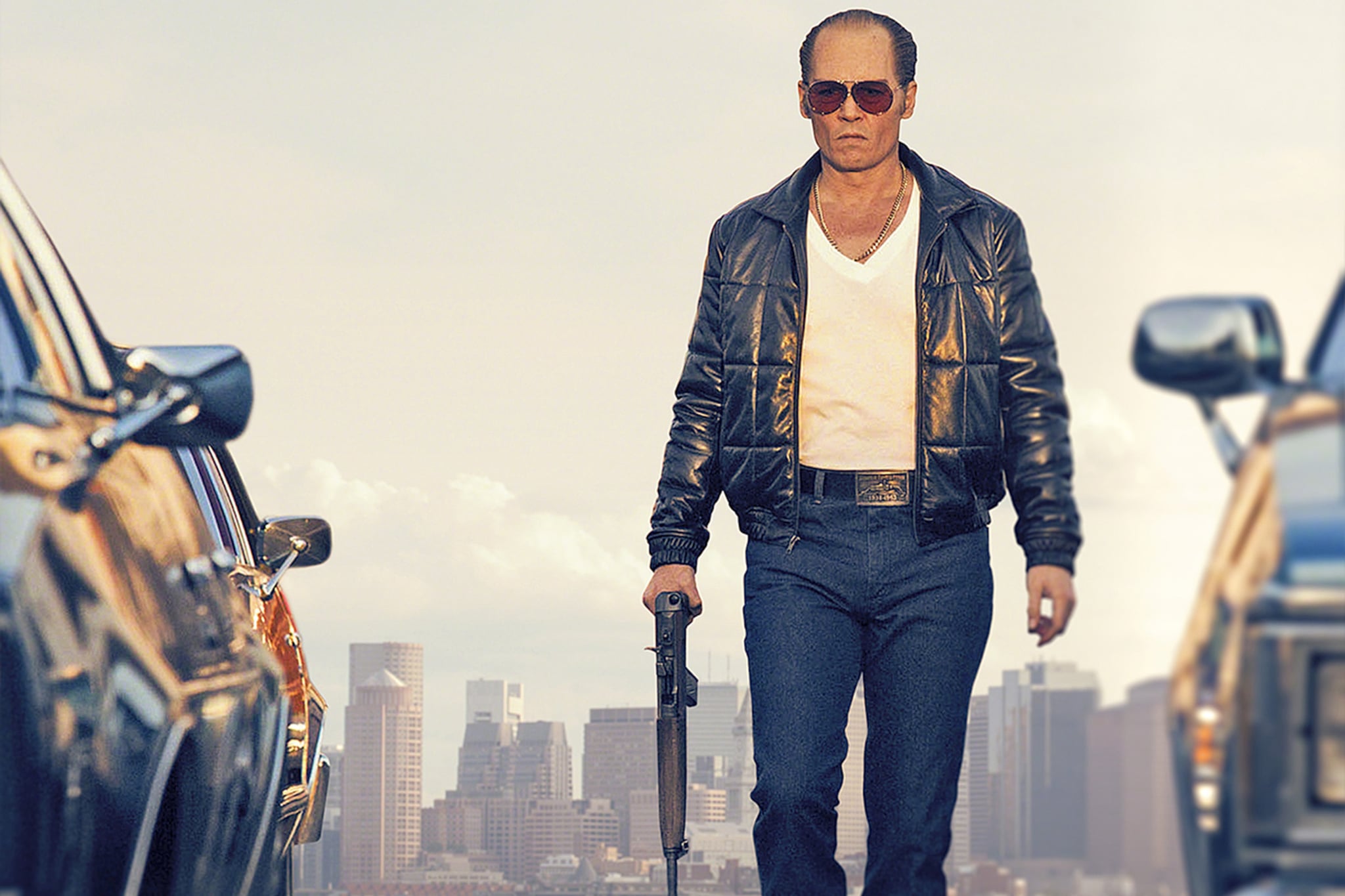 Bulger was born in 1929 in South Boston — a neighborhood affectionately termed "Southie" by locals — and had earned his first arrest by the age of 13. Though the charge was only for delinquency, it was at that young age that he began his career in crime. Thanks to a rap sheet that included armed robbery and assault and battery, he spent five years in a juvenile reformatory. Upon his release, he joined the Air Force, spent time in military jail for assault, went AWOL, and was (shockingly) honorably discharged in 1952.

In 1956, Bulger was arrested for robbing banks in three separate states. He was sentenced to 20 years but only ended up serving nine — three of which he served at the infamous prison Alcatraz. Upon completing his sentence, Bulger returned to his old stomping grounds: Southie. (Incidentally, Black Mass begins at this point in his life.) His brother Billy (Benedict Cumberbatch), a rising political figure in Boston, managed to get him a job as a courthouse janitor. Whitey was more interested in reuniting with the Winter Hill Gang, a small Southie group that included notorious gangsters like John Martorano (played by W. Earl Brown in the movie) and Stephen "The Rifleman" Flemmi (Rory Cochrane).

Bulger quickly made a name for himself in the gang, sanctioning and committing the various murders of rival gang members and even "friends" of the gang who were causing trouble or suspected of snitching. They made their money by fixing horse races and running drugs, among other illegal ventures. Bulger also started betting on a racquetball-like sport called jai alai. When the owner of the World Jai Alai gambling operation was famously shot between the eyes in 1981, Bulger was behind the hit. As for his personal life, Bulger had one child with his common-law wife, Lindsey Cyr (Dakota Johnson). Douglas was born in 1967 and died at just 6 years old due to a rare illness called Reye's syndrome. As the movie touches on, this was a turning point for Bulger.

By the mid-'70s, Bulger and Flemmi agreed to become FBI informants, convinced the partnership would help them bring down rival crime organizations while protecting their own enterprises. Their handler was John Connolly (Joel Edgerton), a special agent who grew up in Southie with the Bulger boys. Each party benefited from the arrangement, but Connolly's penchant for looking the other way when it came to Bulger's crimes eventually took him down. Connolly retired in 1990, and by 1994 the DEA and state and local cops had built a case against Bulger for his illegal gambling operation. Still somehow privy to the indictments, the retired Connolly warned Bulger of his impending arrest, and Bulger fled. Connolly was convicted of second-degree murder in 2008 and sentenced to 40 years in prison; he's now serving his time in a Florida state prison.

Bulger wasn't captured until 2011, after 12 years on the FBI's Ten Most Wanted Fugitives list — alongside the likes of Osama bin Laden. He had been living under an alias in Santa Monica, CA, with his longtime girlfriend. Police found over $800,000 in cash, plus guns and ammunition, in his apartment. In 2013, a jury found Bulger guilty on 31 counts of federal racketeering, extortion, conspiracy, and 11 of the 19 murders he was accused of committing. He was sentenced to two life sentences, plus five years in prison. He currently resides in a Florida state prison.

Want to know more? Here's the trailer for the movie, out on Friday.

Johnny DeppMoviesTrue Stories
Around The Web