Magic Mike XXL is just over a week away from its release, exposing us to another round of bare abs and more gyrating than we'll know what to do with, courtesy of stars Channing Tatum, Joe Manganiello, Matt Bomer, and more. Last year, I had the chance to go to the Georgia set of the sequel to see some of the film being shot and interview all the guys, and after I recovered, I had a lot to reveal about the highly anticipated movie. Tatum, star, producer, and all-around delightful human, chatted with me and a group of reporters about the film and how it's different from the first movie (a really good thing), and now we can let you in on what we learned. Strap yourself in, because you're going to love everything he says about Magic Mike XXL. 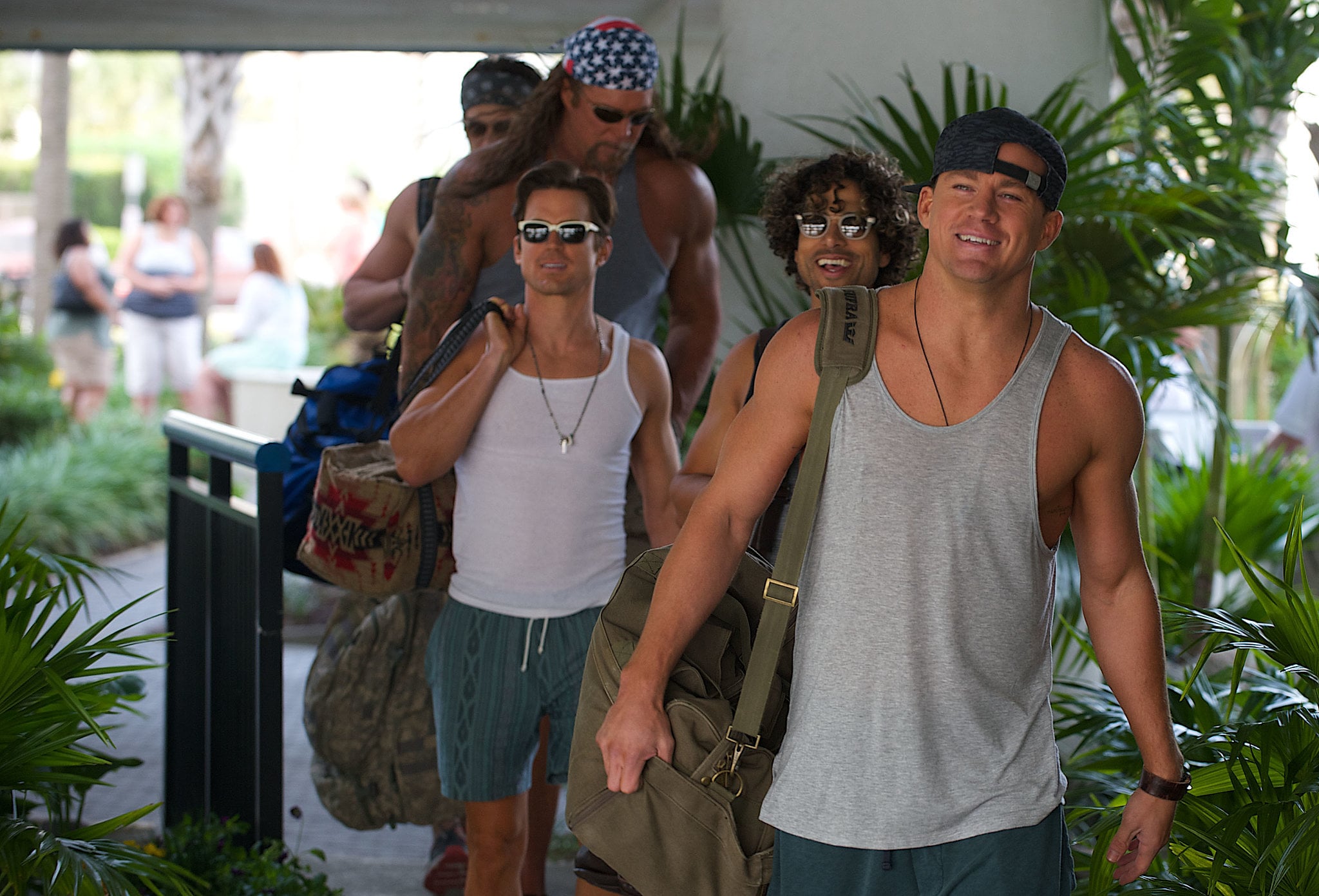 1. Tatum Regretted Not Focusing on the Guys More in the First Movie, So the Sequel Fixes That

"My biggest regret in the first film was that we didn't get to live with the guys more, because they were a discovery for me. I had never worked with any of them; I liked their work, [but] we wrote them very thin in the first draft of the first movie. They came in and did so much. They all just jumped in, just all the way in. That's when we realized that almost no one who comes to this movie doesn't go all in. No one just goes, 'Alright I'm just gonna say some words and go home and do my job.' Everyone is here. I don't have to be here [today] and I'm here. Just about everyone on this movie [does] that — if they don't have to work, they're around. I don't know. It's a fun group. We all just love each other on such a real level, and that's part of the story, just like, who do you have after it's all said and done in these experiences in life? And it's really just the people you've had these experiences with. So that's one of the things that they learn. At the end of the day they have each other and their experiences."

"It's definitely lighter. It's definitely more fun. It might be a little bit more up the alley of some things that people were expecting out of the first one. I would say it's less dark, for sure. I think we had to go into a little bit more of a slice of life dark manner to show proof of the world because it's not a savory world always. There are very dark pitfalls that you can fall into. Some people make it out, some people don't, [for] some people it's their whole identity. Some people are just stopping in on a stop in their life. But this one is really more [of] a buddy movie in the world of men trying to figure out who they are, why they want to keep exploring themselves, and that in turn makes them more interested in what and why women want what they want, instead of men telling women what they should think is sexy. They are just going to ask them and then give it to them."

Tatum revealed that the sequel's title was not a filmmaker decision, but one that someone online somewhere came up with — and they just ran with it. "It was the Internet. It really was. It was the Internet. Somehow, I don't know . . . it wasn't from us. It wasn't from our end saying that's what it was, but that's the way it leaked. It leaked that that was the name and then the Internet ran with it. Then, we came up with about 15 other dumb options that are about the same, pretty much all the same joke that it's bigger. Then we came up with some stupid ones like Magic Mike: Road to Myrtle Beach, and we were like 'That's stupid. We're not doing that.' [XXL] just sort of looks very visual, instead of having '2' on it. It's just different. I don't know. We didn't hate it, so we were like, eh whatever. The Internet spoke, so [we thought] screw it, let's just do that.

While the movie is set at a stripper convention, the likes of which Tatum himself has actually attended, he acknowledges that it's not like any convention you've ever been to. "I have no idea why they call it a convention or why we called it a convention. There's no one selling like technology or anything. I have no idea why it's called that, but yeah I went to one." He also admitted that the real ones pale in comparison to what you'll see in the movie. "It wasn't as cool as this, I can promise you that. I mean, I think this is cool. The first one, again, I guess people are like, 'Oh it's from your life,' and I'm like, really the only part that was from my life was that I went in when I was 19 and I had a sister and I stripped. And that was really the only thing that was factual about it. I never OD'd or anything, none of that happened. But you gotta make some drama somewhere. This one, we just took that as, that's the trip, that's the journey, that's the walk, and we just sort of made that an odyssey. It's a stripper odyssey."

Given the movie's content (and the implied promise that "XXL" brings), a reporter wondered if Tatum and the other filmmakers were afraid of getting the dreaded NC-17 from the ratings board. Tatum clarified that it's not what they want, or are aiming for: "We're not in it for the shock value; we're in it to be entertaining. You want to go over to the edge, put your toe over, and give people something they didn't know they wanted, and then pull it back. Then go, OK, we're good. We don't want to be disrespectful. We don't want people to feel gross or dirty, so we try to stay pretty mindful of that type of thing. We have a lot of people around that are being that barometer."

6. Someone Besides Channing Has Better Dance Moves

I know — shocking! But the humble Tatum had an answer ready when a reporter asked if someone besides him had better moves. "TWitch, like by far," he replied immediately. "Everybody — I call them superpowers — like everyone has their own superpower in the movie that they wield in a very unique way. You know, everybody has their own thing." He explained that each character having a superpower was a necessity so people don't get bored by the dance routines. "When we got done with the first movie and we started editing it, we realized that all the dances end the same. They all end with a guy going out and they get naked. Once you see that once, you're like, 'I know what's coming in the next dance.' and [therefore] you can't show them all. So I started being like, oh my God, these guys have worked so hard on these whole dances, and we did these whole dances and you can't show them. So it was a bit of a planning part on our end . . . it is a bit of a tease the entire movie. You give a little bit, then you give a little bit more. You can't just sort of give it all at once."

"I've always loved to dance, but I knew though that I couldn't just go out and do another 'Pony' to some other great song. By the way, we couldn't ever find something as good as 'Pony' for me personally. So we've had to get creative."

8. Jada Pinkett-Smith's Part Was Intended For a Man — Specifically, Another Star

Jada Pinkett-Smith has a part in the movie as an emcee, a role that was originally meant for a man. Specifically, Jamie Foxx, Tatum told us, but like many things in Hollywood, it didn't work out, presenting a casting dilemma. "We couldn't wrap our minds around who else could do that part like him, and ultimately it painted us into a corner. I think the universe just had a way of being like, you guys are not making the right decision, we're going to make it for you. [In the film] we're going to do a Vegas show, and that emcee in my mind was always supposed to be a woman. So if we find someone else that's not a woman, that's great, [but] I always saw her as a woman. And it's ridiculous to me that I didn't see it before. I go, 'God you're such an idiot.' We were stressing, we went through everybody because we find [Jada's character] in the deep South, and she just comes in and is a deep force in this movie and is a complete surprise."

9. Men Have More Questions About Stripping Than Women Do

On the appeal of a stripping movie, Tatum revealed that men have way more questions about his stripping days — like way more explicit questions — but are weird about seeing the actual movie. "Women, when they find out that I've danced, they go, 'Oh my God really?' And that's it and they don't really inquire that much more. Men are like, 'Wait, what? Are you fully nude? Like d*ck out?' And I'm like, no, and they're like, 'How much money did you make? Did you hook up like every night? Like multiple times, like multiple girls?' They want to know, like everything. And then they're like, 'Nah, I'm not going to see that movie. I'm not going to go see some stripper movie.' I find it so funny. . . . It's a movie about guys being guys made for women, in a way. It's such a strange alchemy. It's weird but I think guys found it, straight guys found it later. Then they were like, 'It's actually a good movie. There's some story there.'

"Weirdly, male stripping hasn't evolved since it started. It's still doing the same acts, like the fireman, and still going into the same '80s rock songs. It's crazy to me that it hasn't evolved at all. It's not that we're trying to revolutionize male stripping or anything, but we're definitely trying to make it a little different and a little bit less misogynistic. I'm not trying to get very meta about it all because at the end of the day, it's just for fun."

11. He Knows How He Will Tell His Daughter About His Stripping Movies

Tatum, who has a young daughter, joked that she won't be shielded from the stripping world so it's never weird. "We're just going to keep her in it, keep her around the world so she never has to ask the question. There are strippers everywhere." We think he was kidding.

Meghan Markle
Meghan Markle Reacts to Abortion Ruling: "What Happens With Our Bodies Is So Deeply Personal"
by Yerin Kim 38 minutes ago