Dylan O'Brien is a lucky guy. While his character, Thomas, only has one love interest in last year's The Maze Runner, he now has two in the sequel. Along with a group of reporters, I caught up with the star on the set of Maze Runner: The Scorch Trials last year, and it happened to be the day he got to kiss both Kaya Scodelario, who plays Teresa, and franchise newcomer Rosa Salazar, who plays Brenda. (I know, poor guy.) He was game to talk about kissing Scodelario, how the stunts compare to Teen Wolf, and what sets the Maze Runner franchise apart from the Hunger Games franchise. (It's not what you think.) Check out the interview below, and get ready for the film's Friday release! 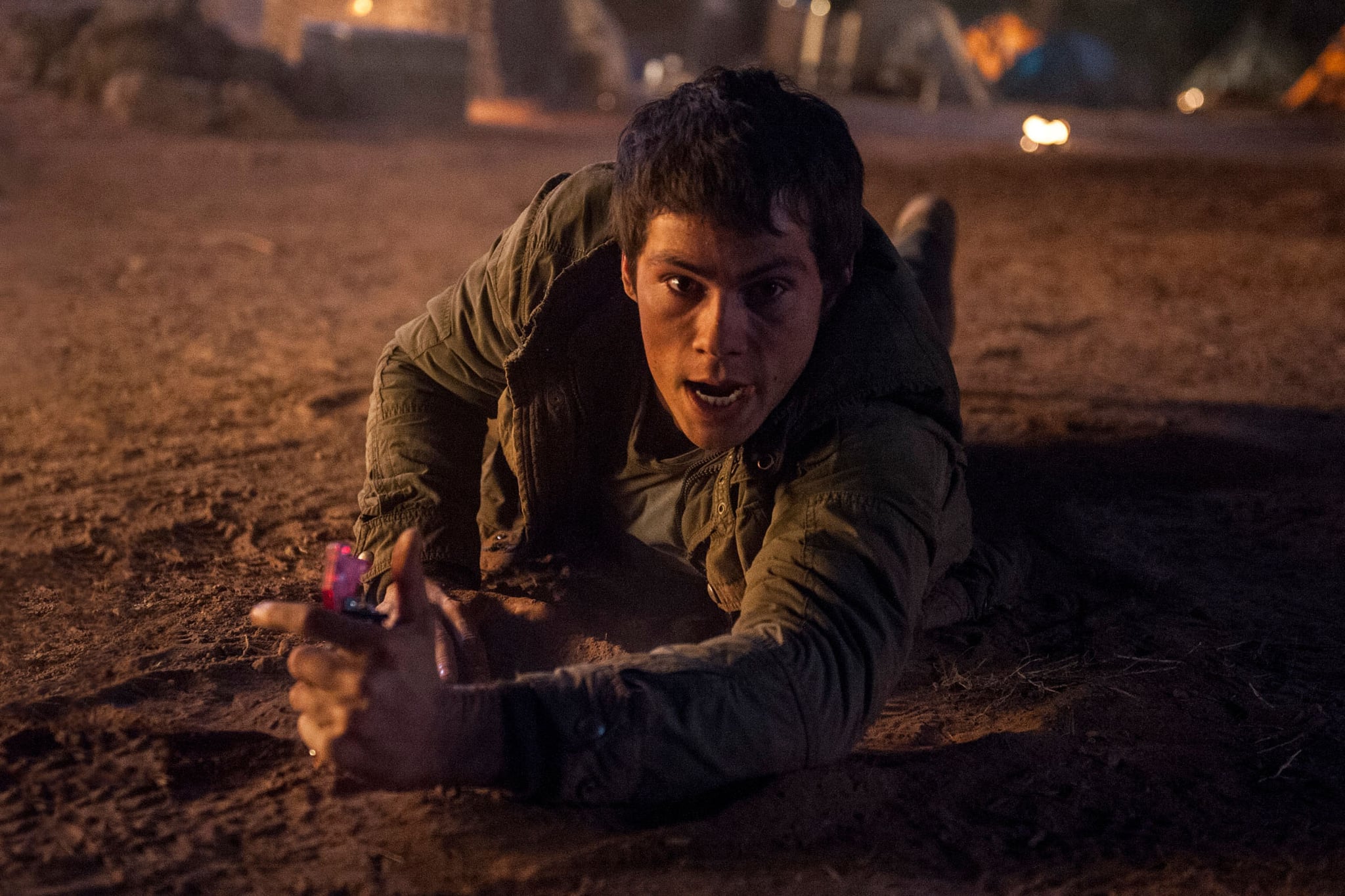 Dylan O'Brien: I know! Two of them.

We got to talk to Kaya right after, so it was hilarious.

DO: How did it go? What was the report card?

DO: That's like the worst review you can get. I kissed both the girls!

DO: No! Because she's not my sister, but she's my good friend. For us, kissing on screen is just acting, so you're distracted by that more than anything — at least I am. I'm always coming away from those things going like, "I wonder how I kissed just now." Because I have no idea, I'm just thinking about what's happening.

Can you talk about the importance of the scene where you kiss Rosa? You guys really focused on that line, "You're not her."

DO: Everything I love about this storyline is that it's so unromantic, and that's what makes it so romantic. There really is no romance going on. There are connections there for the audience to root for, and I think that's stronger without just throwing it in your face. I always like to cultivate that stuff myself as a viewer, you know, like I want [people to be like] "Oh! They're amazing together." In the first one, what I love about Thomas and Teresa's relationship is that it's a connection. It's familiar in a world that's completely unfamiliar to these kids. They are just being like rebirthed essentially. They, to one another, are the one piece of memory that they have and it makes me feel safe, and I think that's beautiful. It's not necessarily just kissing in the woods, that never happens. That's what I love too, it's so authentic. We really want to make it real because these kids are in the situation where they'll never be just making out. They're trying to survive, and that's the other beauty of the story.

DO: Brenda comes into Thomas's life, and they're such a team. They get thrown into this situation together and I think that brings people together in a way. She's almost mean to him, it's such a different dynamic, I love that, but again I feel like that's my favorite kind of stuff. She's like really sassy with him, and at first he kind of hates her too and I love that. They go out on this adventure together and they save one another and start to understand one another and I think that's really cool.

How do the action and stunts compare to your stunts on Teen Wolf?

DO: What's funny is on Teen Wolf, they'll never get me a stunt double because it's a money thing and it's not like I'm ever doing a wolf flip or anything. They'll just be like, "Just fall down the stairs." On this one it's similar. I have a stunt double, but it's never really anything extreme. It's always something that would work better if I do it, because you want to see the kid doing it. We don't want to look like action stars, and I think that's really important to the spirit of the book and the entire story. I believe in that, so it's no problem for me. I also love doing stunt stuff and action stuff. I'm not flipping off helicopters; that would be insane.

DO: Yeah right. Next week they're like, "Hey, we're going to have you backflipping off a helicopter." But there's a lot more [stunts] here. Every day I'm doing something most likely. Teen Wolf is every now and then I'll have something to do. We won't even realize that I planned for it on the day and I'll just be like, "Oh, I guess you fall here."

What is the pressure like now that you're coming back for a sequel?

DO: Funny enough, the only additive is that now I get asked that all the time! The first one was a lot more under the radar, and that's the way I always prefer it to be too. I really believe that the success that the movie has experienced is all of our hard work put into it from every angle and everyone's passion for it. I've always been really proud of that, and for that reason, it still feels really intimate. To be honest, speaking frankly, we don't have the budget of Divergent or The Hunger Games. We don't have the marketing, and it's not in everyone's face like that. I think the only reason we caught some people's attention was because it's cool. We made it really special, I think. I hope. I still feel like we're under the radar. To even be mentioned with those other movies just means that we've done a really good job with it, so I just focus on that and be proud of that.

What for you — and for Thomas — has been the most fun and strange to explore on this new movie?

DO: Character-wise, just figuring out this arc. The way I look at it is that in the first movie, Thomas holds all the responsibility for them getting out. He thought that was the answer and he believed in it so hard. Now that he's gotten these guys out, they've lost more than they had, all that is weighing on him now. He's not so sure that this was actually the better choice. Maybe this wasn't the best thing. He's fighting that thought while having to still believe in himself and remain strong for these guys. Physically, we are in a new place every week. That's what's really great and cool about the movie. I never thought this one would be more tiring than the first one but it is so far, which is really funny. But it's great, because it's like each week is a new energy. We started out in the sand dunes and that seems like a year ago to me. It's so funny. There are like five movies, almost, in one.

Do you encounter the crank that wants your nose?

DO: Yeah, we tried to put that in! I know [director Wes Ball] was saying he's not sure if it's going to work. There are a bunch of things that we do try to at least. I think this is going to be great for the book fans. This, at least, is going to be really, really f*cking cool.

Every cast member that you've brought just gels so well.

DO: Yeah, and Rosa fit right in immediately. Jacob [Lofland] too, and I just feel like we keep getting so lucky. I don't know what it is. I don't know if it's us or what, but we just have a great group. Rosa is hilarious, she'll keep you laughing all day long. She's got boundless energy and she's a fantastic actress. I don't know how we keep getting these talented people with great personalities. I hear that it's rare but I feel like we just keep striking gold and it's great. She's going to be so killer as Brenda. I could never really picture Brenda, I don't know why I always had a really hard time picturing that character and visualizing that and having it come to life for myself. And as soon as I read with Rosa, I was just like, "Wow, there it is." The hair and everything, I just love it. I think it's perfect.