Everest recounts the real-life story of the May 10, 1996 trek to the top of the world's highest peak — a day that would become the deadliest in its history. (That record has sadly since been surpassed.) The movie is based on climber and survivor Beck Weathers's memoir, Left For Dead: My Journey Home From Everest, but most people are more familiar with another book about the fateful expedition: journalist Jon Krakauer's Into Thin Air. The film, while epic and frightening — especially when captured in expansive IMAX 3D — still somehow doesn't compare to the real human drama — which, in my opinion, these two books better harness. Read on for more of the true story of Weathers' incredible survival and to find out about his life after Everest. 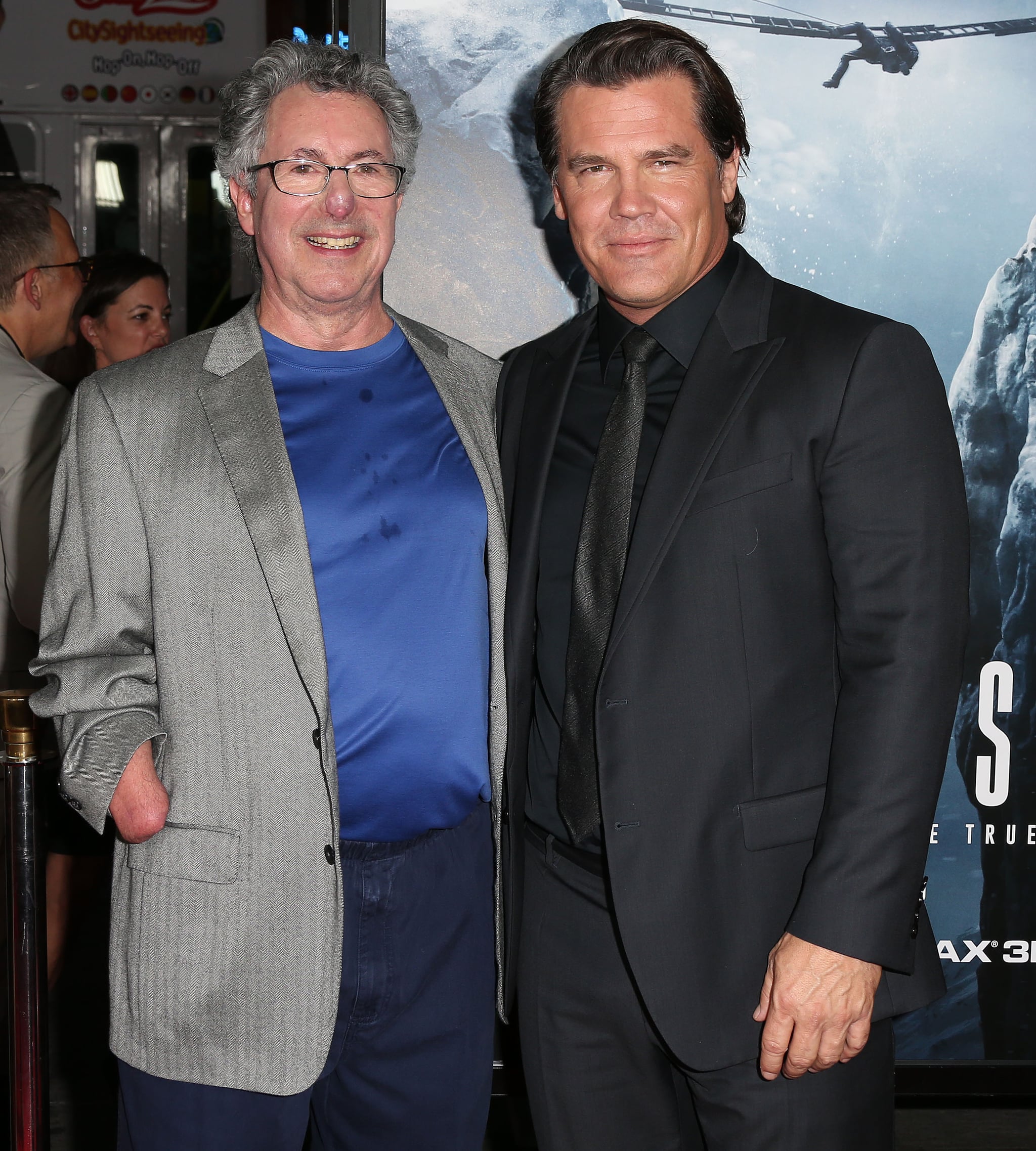 Weathers and Brolin at the LA premiere of Everest in Sept.

Weathers, now 68, is played by Josh Brolin in the film. The Texan pathologist and father of two spent nearly 48 hours on the unforgiving mountain, much of it stranded after a storm descended on his team. He was nearly blind, hypothermic, and frostbitten when he finally stumbled back into camp, the lone survivor among the climbers on his team who were trapped overnight in the brutal squall. By then, his wife Peach (played by Robin Wright in the movie), back home in Dallas, had already gotten a phone call informing her that her husband was dead. His survival was truly against all odds. "There were hundred-mile-an-hour winds; it was a hundred below zero — how did he survive after so many hours exposed to that? It's just not possible," Brolin marveled in a recent interview with Men's Journal. "There are still 200 bodies left up there that people are walking past all the time. Why isn't he one of them?"

Why Does Anyone Risk Their Life For Everest?

One of the toughest things for non-climbers to understand, myself included, is what compels people to take up a hobby that carries the risk of injury or death at all. Weathers describes his own journey to the top of Everest as the result of a lifelong depression, which worsened in his 30s. "I recoiled from myself and my life, and came very close to suicide," he writes in Left For Dead. "Then, salvation. On a family vacation in Colorado, I discovered the rigors and rewards of mountain climbing, and gradually came to see the sport as my avenue of escape."

By the time Weathers headed to Nepal in April of 1996, he'd already climbed five of the Seven Summits, a group of mountains made up of the highest peak on each continent. Crossing all of them off your list is considered one of mountaineering's greatest achievements. He was joined by a team that included experienced Australian guide, and owner of Adventure Consultants, Rob Hall (Jason Clarke), Jon Krakauer (Michael Kelley), Seattle-area mailman Doug Hansen (John Hawkes), guide Andy Harris (Martin Henderson), and Japanese businesswoman Yasuko Namba (Naoko Mori), the only female of the bunch. Everest would be her seventh summit, marking her accomplishment of the kind of lifelong dream few ever fulfill.

It was a crowded year on the mountain, and Hall was nervous about how the backlog of bodies might impact his clients' ability to make it to the peak in time, so he joined forces with guide Scott Fischer (Jake Gyllenhaal) to increase their odds of success. The stakes were high for Hall. Not only was his wife, Jan, expecting their first child together, but it was the second year he had guided Hansen. In 1995, the Seattle-area mailman had made it within 300 feet of the peak before running out of time and being forced to turn around. He'd spent his life savings on his dream of summiting. Hall didn't want to fail him again.

The Day of the Summit Attempt

Reaching the top of Everest is as much a physical feat as a mathematical one. Timing is of the essence, and small setbacks can easily derail a summit attempt. Hall rallied his team around 12:30 AM on May 10, knowing that by 2:00 PM, they'd need to be headed back down the mountain so they could return to camp before their bodies were depleted by the lack of oxygen in the extremely high-altitude portion of the mountain called, rightfully so, "the death zone."

The climb began smoothly. But as Weathers continued on, he increasingly had trouble seeing. He'd had eye surgery a little over a year before, and as the altitude increased, he found himself losing his vision. Hall had no choice but to leave him on the mountain. Hall would never return.

While Weathers waited, the rest of his team trudged on, most of them reaching the peak around 2:00 PM as planned. Hansen was struggling, but Hall felt a responsibility to help him achieve his goal — he'd even given him a discount so he could afford to try again. By the time they made it, not only was it dangerously late, but a massive storm had begun to roll in on the mountain. Hansen and Hall would both die, stranded high on the mountain, after Harris made a fatal attempt to rescue them both.

Brolin as Weathers, preparing for the climb at Base Camp, in Everest

Between Life and Death

Weathers eventually decided he couldn't honor his promise to Hall to wait any longer. He was hypothermic and shivering when a group that included Namba came upon him. He joined them on the trek down, but the storm was increasingly blinding, disorienting. They were lost in the whiteout. Weathers was hallucinating. Eventually, he slipped into unconsciousness, huddled next to Namba.

The next morning, a rescue team came upon Namba and Weathers and determined they were both dead. They left them on the mountain, where most of those who perish on Everest remain. But nearly 15 hours after slipping out of consciousness, Weathers stirred awake. He had lost a glove during the storm. His vision was still minimal. He started walking, using the wind to help guide him in the general direction of the camp. "And it's when I see the tents that, for the first time in that journey across there, that I realized, I am not going to die," he told PBS years later. "There is the tent; there is the camp, what I was trying to get to is right in front of me. And at that point, I knew that I wasn't going to have to sit down; I wasn't going to have to watch that sun disappear below the horizon and just accept it."

Weathers was in dire condition when he stumbled upon the tents. Campers mobilized quickly to help him. His hands were frozen into immovable claws and his face was blackened by frostbite. Still, after resting and soaking his hands, the next morning he somehow was able to strap on crampons with the help of fellow climbers and make it further down the mountain to a lower camp. There, a helicopter Peach had managed to commandeer would fly in and take him to safety. (Helicopters can't fly at the highest heights of the mountain; the air is too thin.) That heroic moment is where Everest leaves us.

Once home, Weathers underwent ten surgeries on his damaged limbs and face. Where the fingers on his left hand used to be is now a two-pronged appendage, his right arm had to be amputated from the elbow down, and doctors grew a new nose on his forehead, grafted from cartilage taken from his ear, before reattaching it in the correct spot. But looking back, Weathers says that perhaps the greatest recovery he had to undergo was with his family and his wife. Unbeknownst to him, Peach had decided to leave him before he left for Everest. "I had alienated my wife, Peach, and I was estranged somewhat from my kids. So I came back from Everest with no other choice other than to change my life," he told the Dallas News in an interview this week. The two reconciled and will celebrate their 39th wedding anniversary this year. "If you can't learn something from dying, then you are seriously a slow learner."

Nostalgia
Tom Hanks, Daryl Hannah, and Eugene Levy Had a Virtual Splash Reunion After 35 Years!
by Chanel Vargas 5 hours ago