The Cast "Signs Off"

Game of Thrones may be over, but the cast aren't through saying their goodbyes just yet. Ahead of HBO's documentary about season eight, the cast members shed their Seven Kingdom characters to thank the show's devoted fan base in an emotional farewell video.

"The fans have given me an identity that I didn't have . . . I didn't think I would ever be able to play someone like this," Emilia Clarke said, thanking viewers. "This is literally my whole adult life."

Clarke is joined by costars Sophie Turner, Maisie Williams, Gwendoline Christie, John Bradley, Isaac Hempstead Wright, and Kristofer Hivju in the video, "The Cast Signs Off." Each actor shares a personal thank-you message, which are interspersed with standout clips from the show. Regardless of how you felt about Sunday's series finale, these tenderhearted goodbyes will hit you right where it hurts. 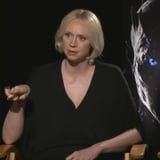 Maisie Williams
Maisie Williams Bleached Her Eyebrows, Just When We Thought She Couldn't Get Any Cooler
by Jessica Harrington 5/12