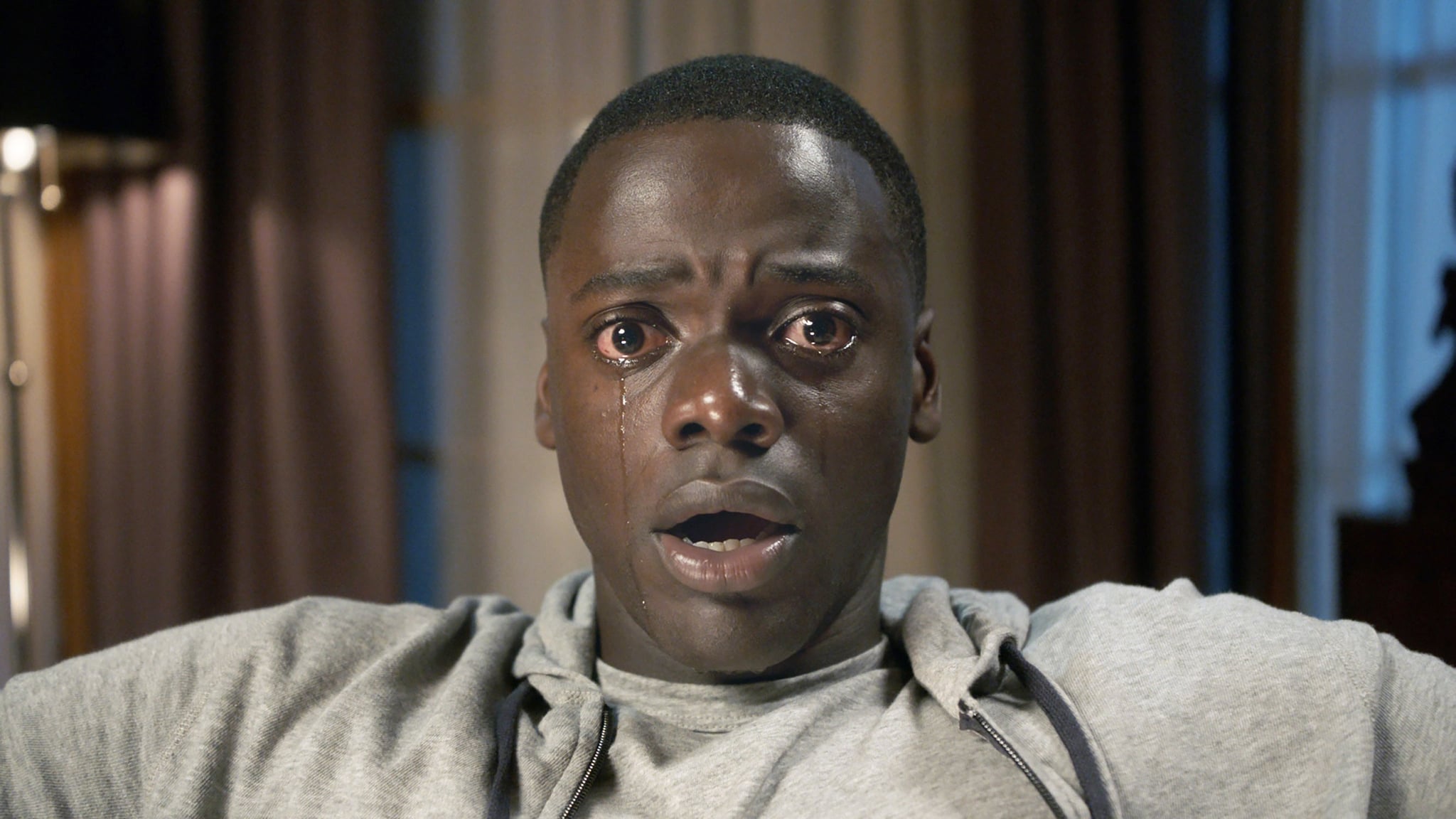 Get Out is making waves for its smart, socially conscious, and straight-up terrifying storyline. Earning a coveted 100 percent on Rotten Tomatoes, the movie has already won over critics, but if you're too scared to see it, we understand. The elevator pitch: a young black man agrees to meet his girlfriend's parents for the first time over a weekend at their secluded estate. When he gets there, he finds himself surrounded by white people, and the only black people nearby seem to have been brainwashed. The brainchild of writer/director Jordan Peele, Get Out has been aptly described as "Guess Who's Coming to Dinner meets The Stepford Wives."

Ready for some spoilers? Let's go.

The minute Chris (Black Mirror's Daniel Kaluuya) pulls up to Rose's (Allison Williams) childhood home, he can sense that something isn't right. Her parents, Missy (Catherine Keener) and Dean (Bradley Whitford), are overly welcoming, and the only other black people in the area are working for them. Groundskeeper Walter (Marcus Henderson) has a vacant stare, and maid Georgina (Betty Gabriel) appears to be literally programmed to please.

The first night he's there, Chris wanders outside for a cigarette but gets spooked when Walter appears out of the distance and runs straight for him, changing course at the last minute. (Later, Walter apologizes for spooking Chris with his "exercise" routine.) When he returns inside, Missy corners him. She's a psychologist, and she wants to hypnotize him into quitting smoking. He doesn't quite agree, but he finds himself glued to his chair as she stirs her tea, mesmerized by the sound. Before he knows it, he's paralyzed. She has him in "the sunken place," unable to control his body. The next thing he knows, he's waking up in bed the next day.

The family is throwing a party at their house, and Rose gets increasingly sympathetic when all of her parents' (white) friends treat Chris like an exotic animal, or worse, like a piece of meat; one woman even reaches out and grabs his muscles. Uncomfortable, he goes upstairs to call his friend back home but discovers that Georgina has unplugged his phone from its charger. She comes to apologize, and while he's trying to relate to her, she almost seems to malfunction. She starts to laugh, then cry, all while maintaining that she loves her job.

He returns to the party, where the only other black guest is a man named Logan. He's dressed for a country club dinner and basically talks like an old white man. Chris is creeped out, so he takes a picture steathily to send to his friend Rod (Lil Rel Howery). The flash goes off, and Logan freaks out, stumbling toward Chris and screaming at him to "GET OUT." He's rushed into Missy's office, and she calms him down behind closed doors. Alarmed, Chris sends the picture to Rod, who immediately calls and tells him that "Logan" is actually a guy from their neighborhood who had gone missing. (Did I mention "Logan" is shown at the beginning of the film, casually minding his own business in a suburban neighborhood when someone pulls up and kidnaps him?) Rod is convinced that the white people are hypnotizing black people and turning them into sex slaves . . . and he's not far off. Chris tells Rose that they have to leave. He's packing when he finds a box of pictures: Rose with her past boyfriends. They're all black. She even dated Georgina! He pretends not to have seen the box and tells Rose they have to get out immediately. As she's trying to find her keys, he runs downstairs, where Rose's aggressive brother (Caleb Landry Jones) is guarding the door. As he pleads with Rose to find her keys, she drops the act, holding up the keys. Rose's brother puts Chris in a chokehold, and Chris wakes up strapped to a chair with a TV in front of him.

It's then that the truth is laid out: Rose's family has been perfecting a way to transfer the brain of a white person into the body of a black person so the white person can enjoy all the benefits of the black person's physical strengths. Chris's body has been sold to a blind art dealer (Stephen Root), who is excited to have Chris's eyes. "Walter" is really Rose's grandfather, while "Georgina" is her grandmother. A small part of the original person remains in their body, which explains Georgina's bizarre meltdown earlier and Logan's freak-out.

Chris escapes, killing Rose's brother, father (who was about to operate on Chris), and mother. He tries to help Georgina, but she attacks him, crashing his getaway car. It's then that Rose comes after him, calmly shooting at him with a rifle. She sics Walter on him, but Chris takes a picture and the flash allows Walter to come out of his trance momentarily. Walter shoots Rose in the stomach and then himself in the head. As Rose is dying, a police car pulls up and she calls for help. Psych! It's Rod in his TSA vehicle. Chris gets in and they drive away as Rose is left to die.