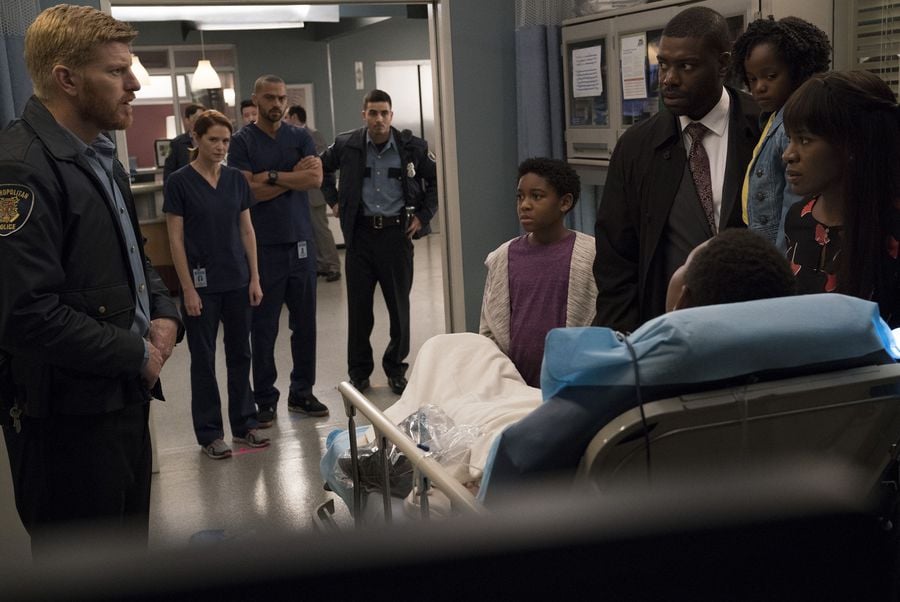 When a young black boy is rushed into the ER, he is accompanied by police officers who insist on handcuffing the 12-year-old, but they are quickly shut down by Jackson. We learn soon that the boy, Eric, has been shot in the neck by these officers, who assumed he was breaking into a home while crawling through a window. The officers didn't believe Eric when he tried to explain it was his own home that he was getting into — because he's only 12 and understandably forgot his key — and they shot him. The shot ends up being fatal.

Related:
Grey's Anatomy: Here's That Song That Just Demolished All Your Emotions

Jackson then shares how he was harassed as a black child in affluent neighborhoods. After Eric's death, Jackson tells the officers, "Bias is human. You're using guns, and your bias is lethal. Adjust your protocol. Fix it. Kids are dying. This kid is dead — for what?!"

The horrific incident leads to Bailey having a very open conversation with her son about how to talk to the police, a scene that was extremely important to episode writer Zoanne Clack.

"It became very clear to me as I'm raising my 4-year-old black son that he will have different experiences in life no matter how much I'm in an upper-socioeconomic part of society," she told The Hollywood Reporter.

She also said that she found talking about unconscious bias in such an uninhibited way (as Bailey does) to be "brilliant" and that the character of Eric was named after the slain Eric Garner.

We end this part of the episode with Bailey's son repeating to his parents, "I am William George Bailey Johnson. I am 13 years old, and I have nothing to harm you," and his parents explaining that they are teaching him these things because they simply want him to come home. It's a talk no parent and child should have to have, and Clack reminds those who have the luxury of forgetting that this is very real.

Saturday Night Live
SNL's "What Up With That" Skit Had Oscar Isaac as a Pirate and Cousin Greg — Need We Say More?
by Kelsie Gibson 16 hours ago