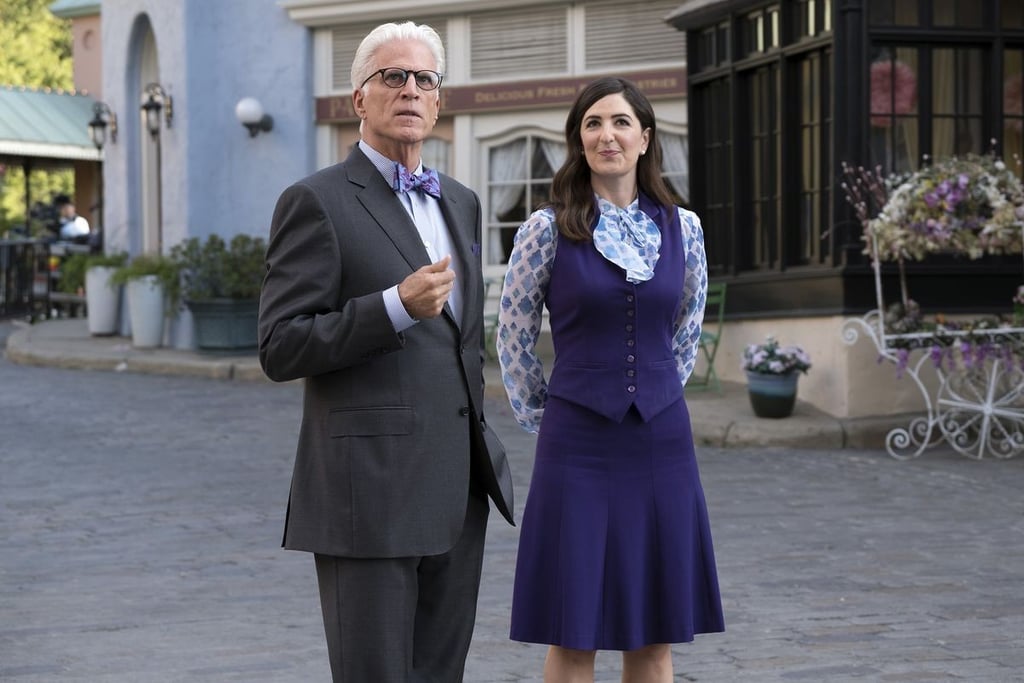 Hey, Janet, How Does Season 2 of The Good Place End?

If you, as showrunner Michael Schur puts it, developed a Wikipedia-level obsession with moral philosophy after watching The Good Place, you're not alone. Fans have fallen in love with the goofy and intelligent show over the course of its 25 episodes, amused by its lively depictions of ethical quandaries . . . and Jason's obsession with Blake Bortles. Needless to say, the series is going strong, with its third season just right around the corner.

Besides its quirky balance between philosophy and physical comedy, The Good Place is also known for its unexpected turns. Season two unravels the revelatory plot twist from the first season — that the team of humans wasn't in The Good Place after all. Rather, they've unwittingly participated in a reality show that Michael has designed so that the four of them can torture each other. But Michael eventually befriends Eleanor & Co. Season two revolves around the gang avoiding Michael's boss and figuring out how to get to The Good Place. By the finale, the humans end up in the place that fans have only seen through flashbacks: Earth.

It's been a while since the show last aired, so we've compiled a refresher course on everything that went down in the season two finale. Keep reading to find out what the characters are up to by the time the third season of The Good Place debuts.

The Voice
As Ariana Grande Joins The Voice, Nick Jonas Jokes He's Rooting For Her to Beat Blake Shelton
by Kelsie Gibson 29 minutes ago

Netflix
The Circle: Fascinated by Lee's Catfish Persona? Meet the Real "River," aka Doak Rapp
by Emily Weaver 11 hours ago

Netflix
The Circle: Everything You Need to Know About Courtney and His Pop Culture Show
by Emily Weaver 11 hours ago

Netflix
The Serpent: Why Charles Sobhraj Was Known as the Bikini Killer
by Chanel Vargas 16 hours ago

Netflix
The Circle: Meet the Real "Emily" — aka Jack's Catfish Persona
by Emily Weaver 16 hours ago