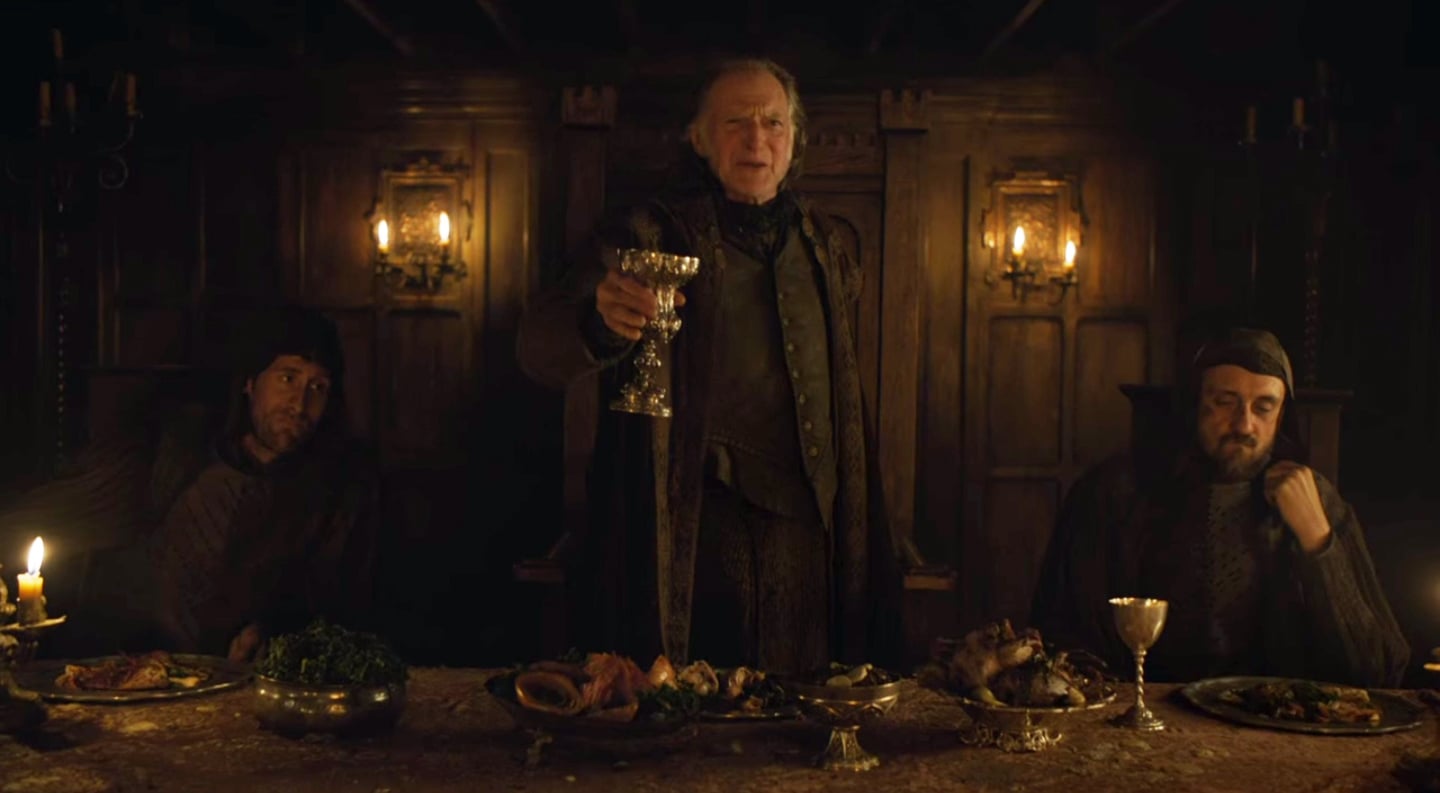 If you utter the words "Red Wedding" to any Game of Thrones fan, you're sure to illicit a response — shudders, tears, or outrage are amongst the most common. The bloody nuptials held at The Twins are one of the most traumatic moments in television history, and the mastermind of it all, Walder Frey, is one of the most loathed characters on Game of Thrones. But if we're lucky, we'll soon see Frey brought to justice . . . bloody, gruesome justice. Revenge for the Red Wedding is one of the most common hopes among fans, and thanks to a preview for the season six finale that features a Lannister-Frey celebration at The Twins, it's high time it was doled out.

One Redditor brought up an interesting theory about how the last living Red Wedding perpetrator, Lord Frey, will meet his demise. Read the intriguing prediction (and pieces of proof) below.

The Red Wedding was orchestrated by three men: Tywin Lannister, Roose Bolton and Walder Frey. At the Red Wedding, they shot Robb with arrows, stabbed him, and after they were done with her son, they slit Catlyn's [sic] throat. Ever since, Tywin's son shot him with a crossbow, and Roose's son stabbed him just like Roose stabbed Robb. This leaves Walder Frey, and to complete the trifecta of karmic justice, he'll get his throat slit by his own son. These deaths all happened or will happen in their own homes too, due to their disregard for guest right. I bet one of Walder's sons kill him early in the next season, although I'm hoping for the son to slit his throat, and then unmask to reveal herself as Arya Stark, who's back to killing the people on her list.

In short, each of the Red Wedding's other masterminds has faced death at the hands of his own respective son, in the same manner that they slaughtered the Starks in Frey's halls . . . and now, it's Lord Walder's turn to pay the piper. If this fan theory is correct and continuity is key, then we can expect to see Frey's throat slit sometime during the finale. Revenge is sweet, eh?

Netflix
Uh, Did We Completely Miss This Obvious Murder in You Season 2?
by Stacey Nguyen 2 hours ago

Netflix
Want to Keep Up With the Stars of Netflix's Cheer on Social Media? Here's a Handy List
by Amanda Prahl 3 hours ago

Netflix
Surprise! The Building in Netflix's The Circle Isn't Even in the United States
by Amanda Prahl 5 hours ago

Netflix
Netflix Knows You Love Virgin River, and That's Why Season 2 Is Already in the Works
by Amanda Prahl 2 hours ago

Netflix
Ready For More of Cheer on Netflix? Here's the Latest Scoop on a Possible Season 2
by Amanda Prahl 17 hours ago

Riverdale
Here's When Katy Keene Happens in the Riverdale Universe — It's Confusing, We Know
by Stacey Nguyen 19 hours ago