If you don't know who Jack O'Connell is, you soon will. The 23-year-old British actor, who is probably best known for playing Cook in the UK series Skins, is making a name for himself in carefully chosen roles and will soon star in the Angelina Jolie-helmed Unbroken. However, before he hits theaters in Jolie's latest project, he will be on the big screen in Starred Up, a gritty prison drama that is one part social commentary on the nature of prison and one part touching father-son story, as O'Connell's character Eric confronts his dad and fellow prisoner, Neville (Ben Mendelsohn). We caught up with Jack at the Tribeca Film Festival to discuss the film and his artful approach to his craft. 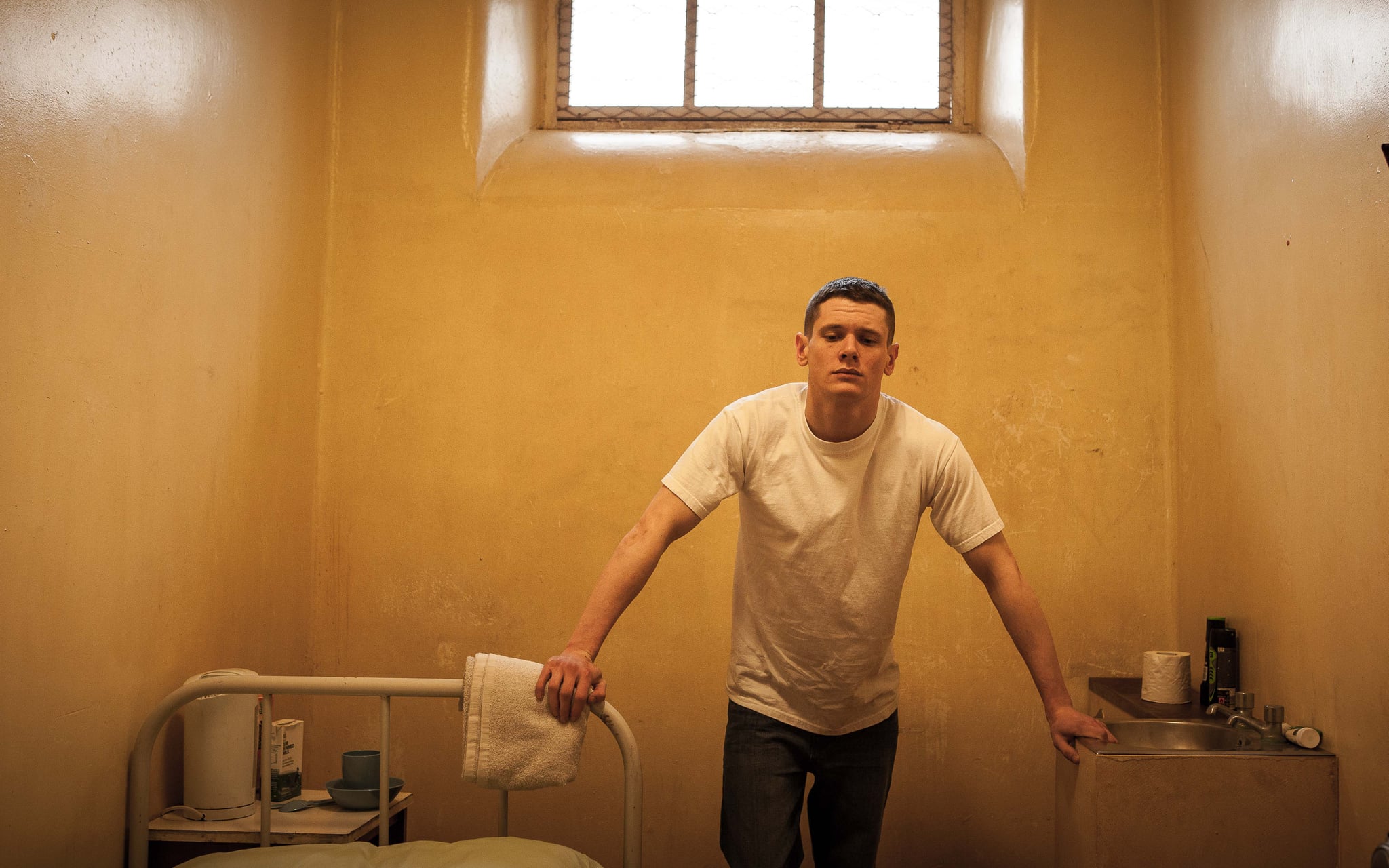 POPSUGAR: How do you prepare to play someone like Eric Love, who is so intense?

Jack O'Connell: I don't know, because it begs the question of whether Eric would regard himself as intense, you know? He's just him. I guess he doesn't know the difference, so it wouldn't really serve me well by just trying to be intense. I just have to focus on and be more conscious of factors that result in an intense individual. It's stuff like what Eric might have to contemplate on a day-to-day basis. His walk, that's part of his message. . . . Somehow by just doing the walk, he's able to demonstrate how he doesn't f*ck around. So I have to concentrate on other factors that are more certain to him as opposed to how he can be regarded by the audience.

PS: Is that how you approach characters in general — you try to inhabit their actions rather than being like, "Well, he's intense" or however you would characterize them?

JO: Yeah, because if I was trying to play to a description of him, then I'm merely only acting. It's just an act. Whereas the interesting part of my job is, you strike gold when you don't act and you're able to just understand the character enough to try and live it the best you can.

PS: One thing the director, David Mackenzie, has talked about is that he is really uncomfortable glorifying violence. And obviously there's a lot of violence in this movie just because it's the nature of being in a prison. What's your opinion on that?

JO: The violence that kicks off in the story kind of has a — it's validated for some reason. Eric's not a bully, so he doesn't pick on people. He's usually just defending himself. I haven't really got a problem with that. If I was playing some murderous psychopath who's a bit perhaps screwed up in another way, then that might be a different answer. But at least on a day-to-day sort of street level, then he's in a position where he's got to attack first at times. And he does it out of principle. The fact that he doesn't victimize people who are obviously weaker than him suggests more admirable traits in him. Because he's merely surviving.

PS: What was the most difficult scene to film for you?

JO: It wasn't really by the scene. I remember week one was OK, week two hurt, week three was painful, week four was horrible, but we knew it was over, so you put yourself through it. I can tell you one scene where the crew didn't envy me. There's quite a lot of them, but one in particular is where I get oiled up and attacked by prison guards. It was cold, and I had people come up to me afterwards and shake my hand, so that was rewarding, you know?

PS: That scene is really physical. How much were you guys really going at it?

JO: It's a bit more choreographed. So we kind of know the ins and outs and the important beats we need to hit. It was very important that, with the rest of the film looking so real, we couldn't stage too much of the violence. It couldn't really feel performed. So, yeah, you are getting gripped up and your arms twisted and whatnot. Sometimes I like it when [the fighting] hurts; if it doesn't hurt, I've got to work more. Sometimes it's nice — as long as I'm not breaking limbs, I'm all right with a bit of pain.

PS: What was it like working with Ben Mendelsohn for this?

JO: Phenomenal. I respected him as an individual way before we were on set together. So, I kind of craved his attention, I was able to crave his attention and approval as Eric. It's difficult when you don't really like the person you're on set with. And that wasn't the case with Ben. He made my life a lot easier by being absolutely professional but also providing this performance where I could have total conviction in it. There was once or twice where his performance provoked something out of me which wasn't reversed and vice versa, you know? We got spontaneous a couple times.

JO: Yeah, if I know the character well enough. It can be potentially problematic if you're on set with irresponsible actors who just want to make noise on camera and be noticed for their career, but that wasn't the case on this film. We got real lucky that everyone devoted themselves to who their characters were and its overall dynamic as opposed to having selfish agendas.

PS: Do you think that playing a character that doesn't really voice his emotions is more exciting to play as an actor?

JO: It depends on the people making the movie and who the movie's for. I hate exposition — when I go to the cinemas, I like to do a bit of thinking myself. I hate being force-fed information. There were certain things we didn't need to be directly told by Eric. We never know why he's in prison, we never know his mom's name, we don't know their relationship at all really, we just get slight insight. They're not there to discuss their feelings with each other. They haven't been sent there because they're particularly sensitive.

PS: You're also in Angelina Jolie's Unbroken, which is another type of prison film. How was it transitioning into that project?

JO: You just try to focus on the period. That's one of those things. So, I just focus on the period and the human himself. I have to see the character well enough, not thoroughly, but I have to see him to a degree well enough to know him, I guess. And at least with Louis [in Unbroken] I had this direct reference, since he's a real person. It's challenging, but it's part of the job. If I start whining about not being able to go from one job to another, then essentially I'm whining about being busy, which makes no sense whatsoever.

PS: Getting to work with Angelina must have helped too.

JO: Yeah, and I got a lot of support from her, too, which was great.

Starred Up will hit theaters in the US in August.