Sunday's episode of Outlander, titled "Cream de Menthe," is the first time viewers really get to know young Ian, the youngest child of Ian and Jenny Murray, played by John Bell. And what an episode it is — Ian smuggles liquor, hides a body, loses his virginity, and gets trapped in a massive fire in his Uncle Jamie's print shop. I hopped on the phone with Bell recently to talk about his new role, and he agreed that this was quite the big episode to jump into the show on.

"When I read the script for the first time, I was like, 'Oh! Talk about quality stuff!' and then I kind of went, 'Whoa. That's a lot of stuff,'" said Bell, feigning panic at having to do so much for his first real episode. "But filming it was fantastic . . . What's so good about it is so many of those scenes really give you an idea of young Ian's character."

One of the things Bell loves about his character is the relationship Ian has with Fergus, which viewers got a nice taste of in the most recent episode. 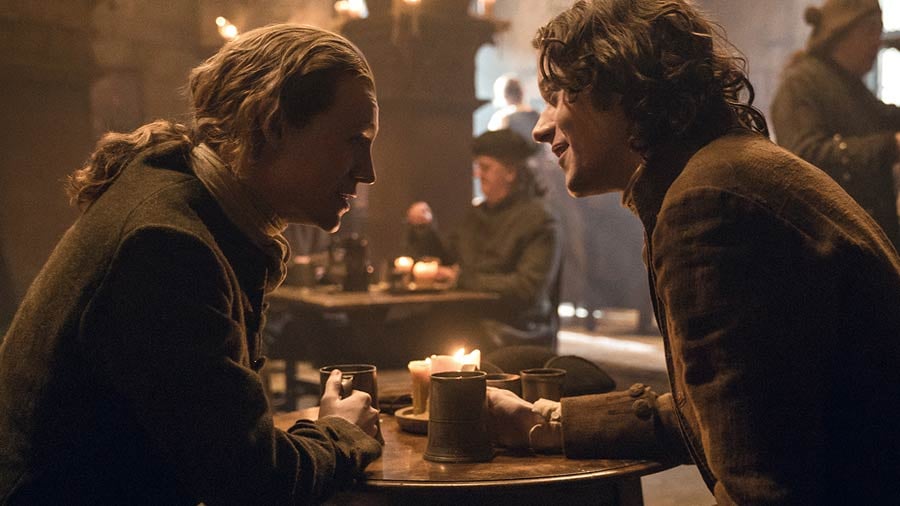 And the advice pays off, as Ian and Brighid end up back at the print shop for some sexy time. Bell said it was the first time either he or actress Zoe Barker had done a sex scene, so they did indulge in a wee bit of liquid courage to prepare.

"I'll tell you a secret: because that was such an intimate scene for me and Zoe, the girl who plays Brighid, and neither of us had done anything like that before, we had one of the drivers nip out and get us a wee bottle of whiskey. A wee one! But we each had half the bottle before we went on set and that got us ready for that scene," said Bell. "It had to be whiskey, of course. Couldn't be anything else."

Alas, Ian's first time is rudely interrupted by the arrival of Sir Percival's henchman, and in the ensuing fight, a fire breaks out. Jamie's entire print shop goes up in flames, and if it weren't for his brawny uncle rushing in to save him, young Ian would have been toast. When we asked about how much of it was done by a stuntman (for safety reasons), Bell surprised us by saying that it was all him.

"That was me for all of it! I absolutely did everything — I was thrown about; that was me stamping on the flames; that was me backing up when the smoke rolled in; that was all me. I had a few bruises to show for it at the time," Bell revealed. "It was such fun. I love stunt work, I love working with the stunt guys, because it's a bit like a dance when you do it. It's all choreographed so precisely, and coming from the background of being a dancer, I can really fit into that style of working. So I had a great time."

"And the flames — they look close on screen, but we were very safe," he added.

Related:
If Outlander Follows the Books, Things Are About to Get Seriously Insane

So it was quite an exciting episode for Bell to come into, and for his character, it just continues to get wilder and wilder. Young Ian is a fan-favorite character, so Bell admitted that he was nervous about possibly disappointing the book readers, but so far the reactions have been great.

"On social media I've had a lot of reactions and the majority of it has been overwhelmingly positive and lovely," Bell said. "I have no worries anymore, because I seem to be making a lot of people happy. Young Ian is a very important character; people love him. For a lot of people, he's their favorite character, so there was certainly that pressure coming onto the show. But I had to forget about that, because if you're playing only for the audience, you're making the thing just about you. So by staying to the truthfulness [of the character], I feel like I'm doing a good job for them and I'm not too much of a disappointment."