If LA suddenly became an empty, deserted wasteland, there's no one we'd rather drive around town in a '65 Mustang with than Kristen Stewart. Apparently The Rolling Stones agree and chose her to be the badass, carefree star of their music video for "Ride 'Em On Down." The song is a bluesy cover of Eddie Taylor's 1955 recording off their new album, Blue & Lonesome, and features the Personal Shopper actress doing doughnuts on the traffic-free city streets. In other words: she's living every LA driver's dream. 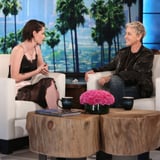