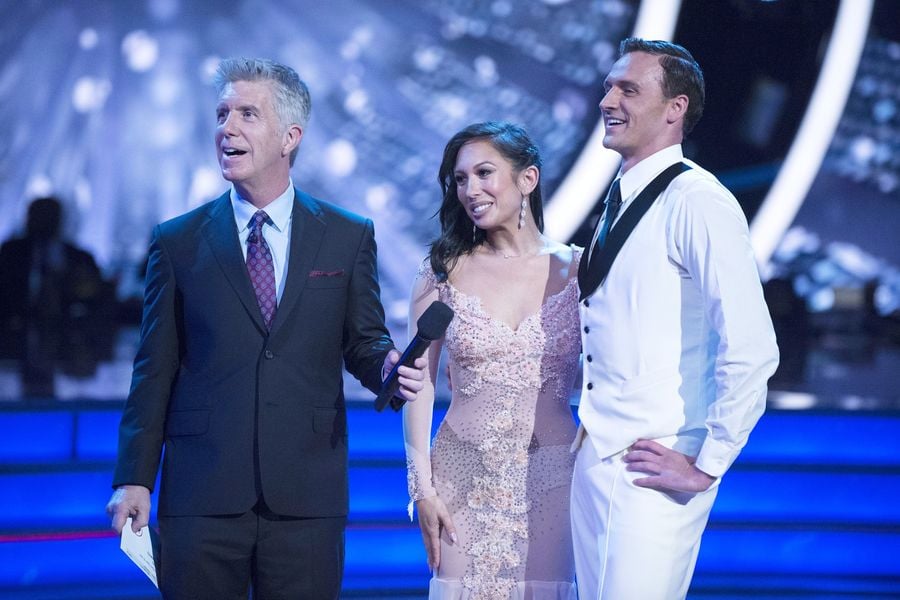 Ryan Lochte is a polarizing figure after his controversial turn at the recent Olympic Games, but you'd think he's probably out of harm's way on Dancing With the Stars. The swimmer made his DWTS debut Monday night, and while the judges were critiquing his and partner Cheryl Burke's performance, a man rushed onto the stage to tackle Lochte. It wasn't a random act; the man was wearing an Anti-Lochte shirt. The show hastily cut to a break, then picked up after the commercials with some comments from Lochte, who was unscathed by the incident.

"So many feelings are going through my head right now," Lochte told host Tom Bergeron. "I came out here and I wanted to do something I was completely uncomfortable with, and I did." He also said that he was "a little hurt" by the incident. Shortly after, judge Carrie Ann Inaba posted an Instagram with a caption reading, "We had a bit of a scary moment during tonight's live taping of @dancingabc, but thanks to our security team and incredible staff at #DWTS, no one got hurt."

Here's the video of the attack, thwarted by a security guard:

WATCH: "They had dressed appropriately and had tore those away to reveal their shirts." - @Tom_Bergeron #DWTS https://t.co/xX6puwPQDF

Another video of the incident:

Here's video of the aftermath:

Here's a photo of the two men:

Cuffed for rushing the stage at #DWTS during @ryanlochte's dance pic.twitter.com/rjueIKuLsZ

Image Source: ABC
Ryan LochteDancing With The StarsTVEntertainment News
Around The Web

Music
American Idol: Lionel Richie Said This Singer's Voice Only Comes "Once in a Generation"
by Chanel Vargas 1 hour ago