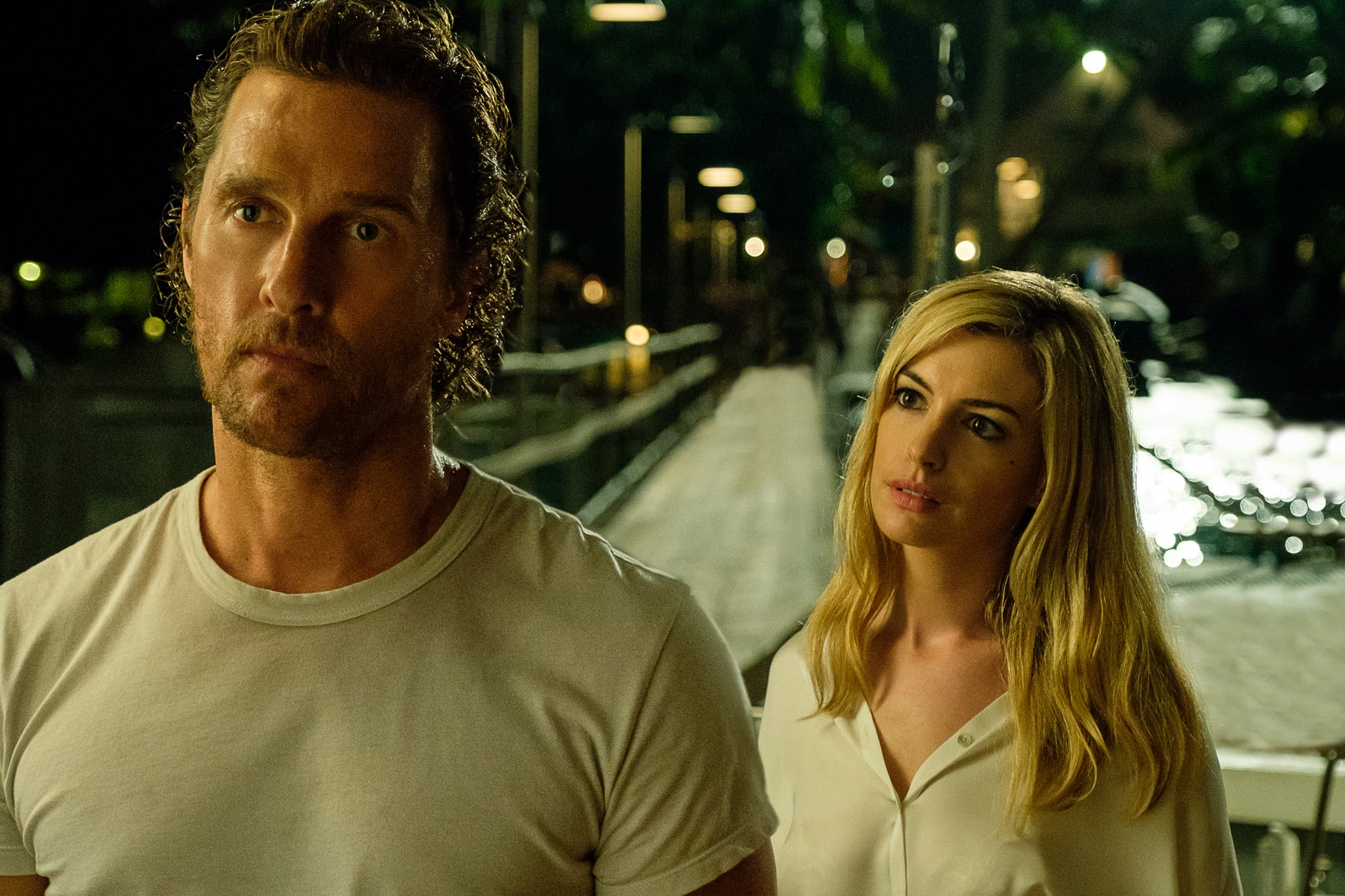 Warning: major spoilers for Serenity ahead!

The island noir-thriller Serenity reunites Matthew McConaughey and Anne Hathaway on the big screen four years after they worked on Christopher Nolan's existential Interstellar, and to be quite honest with you, it's insane. It's bonkers. It's [insert any synonym for "WTF?!" here]. So in case you want to know exactly what goes down at the end of the film, we've got you covered.

Written and directed by Steven Knight, Serenity features McConaughey as a burned-out fishing boat captain named Baker Dill. Baker lives in a tropical beach town called Plymouth and is known for his obsession with chasing a giant tuna named Justice (we're talking serious Moby Dick allusions here) and being so great at sex that Diane Lane pays him for it. He's the kind of man who looks dirty 95 percent of his time on screen — which makes sense since he bathes by diving into the ocean every day.

Baker's daily routine of taking tourists onto the water for fishing trips — which often get sidetracked because of his Justice obsession — gets interrupted when his ex-wife, Karen (a blond Hathaway heavy on the femme fatale vibes), shows up and offers him $10 million to kill her abusive new husband, Frank (Pet Semetary's Jason Clarke, a reliable bad guy). Baker initially wants nothing to do with Karen or her husband, but Frank's domineering nature rubs Baker completely the wrong way. To push her ex-lover to take the deal, Karen reminds him of their son, Patrick, who also suffers because of Frank. The two have rough, kinky sex (which is very disturbing for a reason I'll explain in a bit), and Baker agrees to kill for her. At some point during this exchange, Karen tells Baker that Patrick has been able to hear him "through the computer" whenever Baker speaks aloud to him.

Here is where it all goes bonkers. Up until this point in the film, Serenity is your average, somewhat ham-fisted thriller that gets by on the chemistry between McConaughey's sloppy Baker and Hathaway's sultry Karen. But it's after the revelation about Patrick hearing his father that the film starts alluding to there being more happening behind the scenes. We learn that Baker, Karen, Frank, and the entire island of Plymouth are all characters in a video game — A VIDEO GAME! — based on real-life people. And, of course, the video game creator and programmer is 13-year-old Patrick (Rafael Sayegh). If you're wondering why Patrick would make a video game where his father's sex life features so prominently, same.

If you're wondering why Patrick would make a video game where his father's sex life features so prominently, same.

Baker's realization that he's a character in a video game allows the truth behind his actual identity to finally be explained. Apparently Baker is a deceased war hero who died in Iraq and left behind his son, Patrick, and his wife, Karen. His wife is frequently abused by her new husband (aka Frank). Patrick created the game as an escape from his abusive environment, where he could enjoy seeing his dad still alive and on a safe, idyllic island. But as his stepfather's abuse continues, he begins changing the game's code so that Baker will kill Frank and bolster his confidence to do the deed in real life. It's a very tangled web, but not totally hard to follow, right? Enter Reid Miller (played by Succession actor Jeremy Strong), a fishing-supply salesman who complicates it even further. 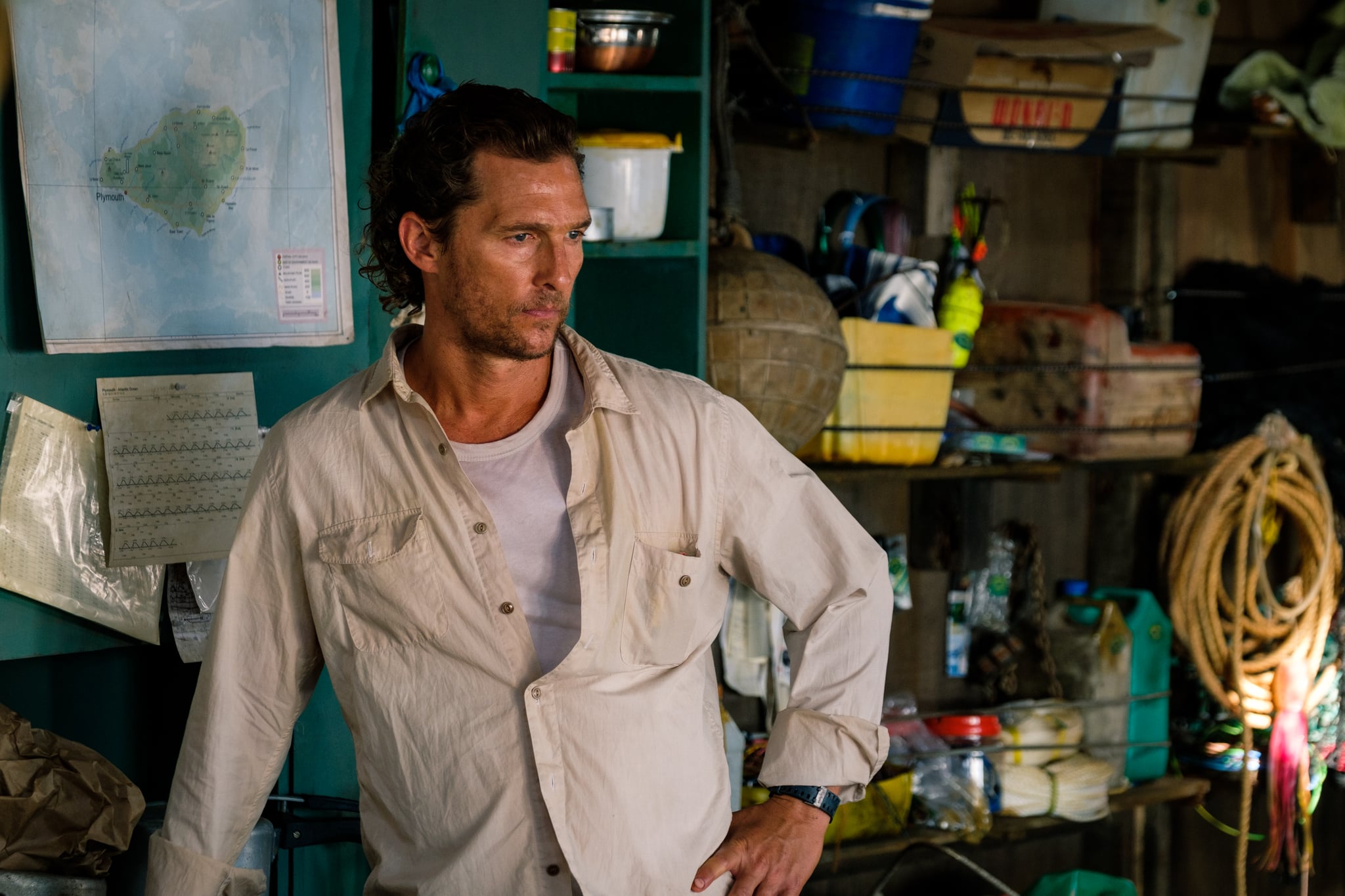 Though Reid originally just seems like an overly persistent salesman hoping to sell Baker a fancy supersonic fish finder, he quickly reveals himself to be a sign of the game attaining sentience. The game sends Reid as a representative of its moral code to rein in Baker and convince him not to kill Frank. When Baker proves too stubborn to dissuade, Reid fully unveils the truth to Baker about everyone's existence, which understandably leads to a bit of an existential crisis.

Baker has a semicoherent rant in the middle of the island before bucking up and deciding to go through with killing Frank. He and Karen get Frank on the boat and manage to have him thrown overboard and eaten by sharks. The death of video game Frank empowers Patrick to leave his room and attempt to kill real-life Frank while the man is abusing his mother. He wounds him and is taken into custody before being released back to his mother's care. In the game, Baker is completely alone until he receives a call from the video game version of Patrick. His world rearranges itself as Patrick promises to visit, and the two are virtually reunited (Baker is still dead in reality).

If you've made it this far, I can safely say that this does not cover how truly wild Serenity is. It's a bonkers combination of The Sixth Sense, Shutter Island, and Tron. It's a lot. But your mileage may vary depending on whether or not you're into the level of extra-ness that it is. All I know is I won't be going on any fishing trips for a long time.

Movies
Calling All Animal-Lovers! These 21 Movies on Disney+ Are Perfect For You
by Samantha Bergeson 7 hours ago