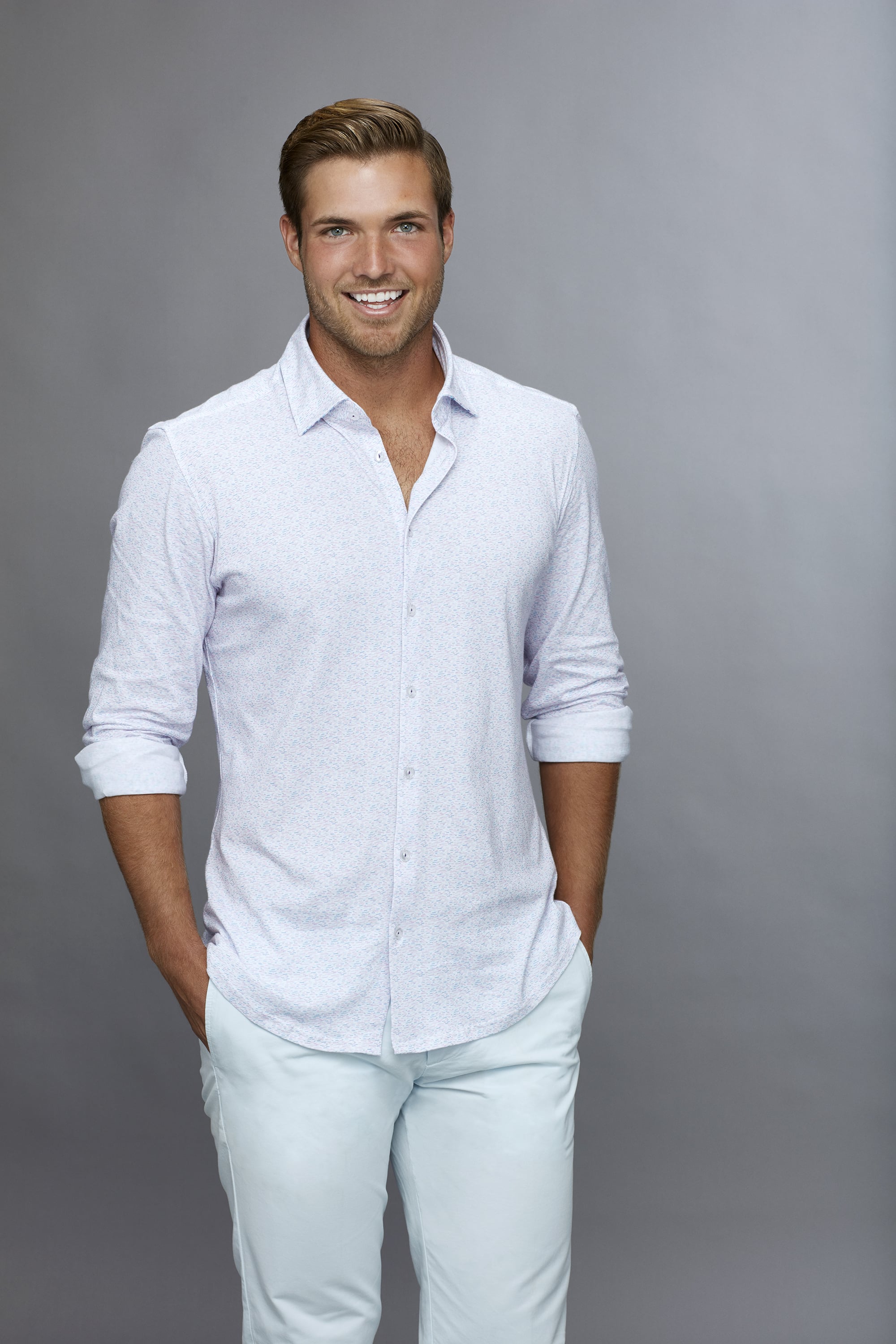 If you've been watching this season of The Bachelorette with Becca Kufrin, you know Jordan Kimball as the self-congratulatory — but somehow still very endearing — pro-socks Wilhelmina male model. It's obvious he's been cast as the villain this season, but like previous villains before him, including Nick's Corinne Olympios and Arie's Krystal Nielson, the Derek Zoolander-esque contestant is completely harmless.

In fact, we'd argue he's the TV gift that keeps on giving, with notable lines including, "My brand is the pensive gentlemen," "I can't go home. It wouldn't be fair to Becca," and "I wanted her to hear the tapping of the shoes I wore because it's like the heartbeat of a gentleman."

We did some sleuthing on Jordan — which may or may not have included a leisurely scroll through his Instagram account — for deets on his career as a model, dating history (4,000 Tinder matches?), and more.

Who Is Jordan Kimball?

Jordan is a 26-year-old male model based in Crystal River, FL. In college, he majored in business and accounting, but it's clear the only business he's interested in these days is striking poses. According to his Bachelorette bio, we know that in addition to modeling, he dabbles in kayaking and loves to run. He also recently told Glamour in an interview that he lives "everyday like a gentleman," is a religious man (one reason why he's so drawn to Becca), and is looking forward to a relationship where he can just chill on the couch with BAE.

As for how he got onto the show, he told Glamour, "I was in Venice in Los Angeles at a Whole Foods and a producer approached me. Then I had a friend who nominated me a year before, and I had another producer a week later say, 'Hey, I have your nomination in front of me.' I already had my application submitted from being recruited, and we went from there. She had the whole hand in submitting me." 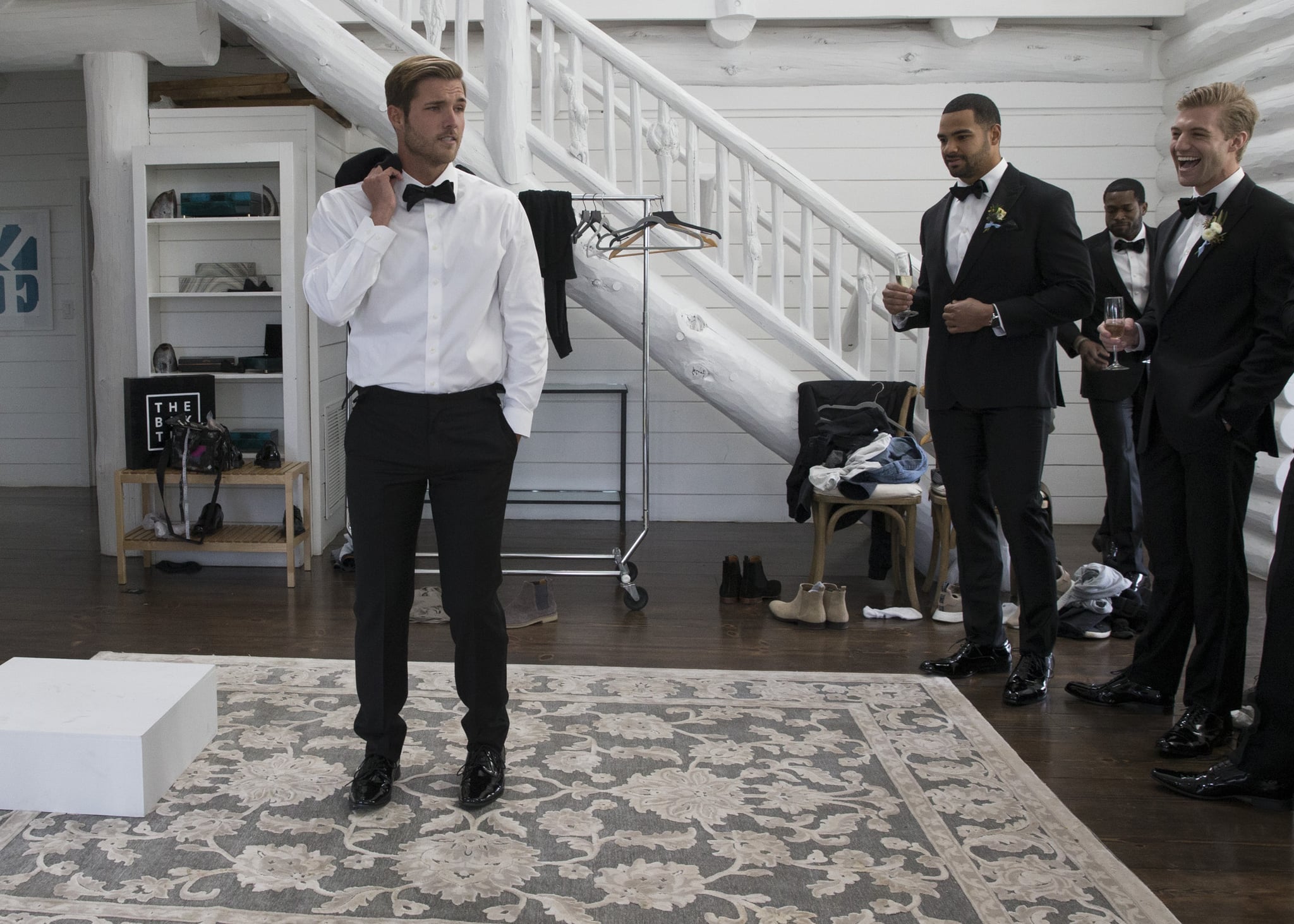 The guy has hair that rivals Barbie's Ken and spent six hours picking out a suit for his out-of-the-limo debut. Of course he's a male model! Judging by his dessert-level Instagram feed and ability to stare down an entire room with his "pensive gentlemen" smize, it's obvious he looks damn good. The question, though, is whether he's actually getting solid work.

He is indeed a Wilhemina model, which is pretty impressive. From the appearances of his modeling portfolio, it looks like he does mostly commercial fashion print modeling versus runway or haute couture. He was the cover boy for John Craig's Fall/Winter 2017 catalog, and recently posed for shoots with Quay sunglasses, Lavish Designs & Events, swimwear company Okaicos, and Shorebrand.

All that said, he's clearly a working model whose career is just starting to blossom (cue "here for the right reasons?").

OK, so we know that he's ridiculously good looking and allegedly has 4,000 requited Tinder matches, but has the guy actually had any notable relationships? Based on some sleuthing, we have reason to believe he was casually dating someone just before the show aired. The mystery woman took to Reddit's The Bachelor subreddit to ask about what the show was like, and if there was any hope they could rekindle their romance upon the season's ending.

In one thread that she's since deleted (but comments remains), she wrote, "I just hope Jordan will be my friend when he comes back and believes me over RS. I wasn't being malicious I swear!" She wrote this after gossip columnist Reality Steve discovered who she was (based on her Reddit post) and revealed her identity, along with some other dirt, on his spoiler website.

We can't be sure he's talking about that relationship or another one in his recent Glamour interview, but when they asked why is last relationship didn't work out he wrote, "Because I honestly feel it was the wrong time in our lives. It was a typical tragic first love, and it ended very mutually."

In terms of dating in general, he also told Glamour, "My biggest fear in a relationship is that you give your all to that person in a relationship and fall hard, and maybe they weren't in it to win it like you were."

Where You Can See More of Jordan

For some serious eye candy, check out Jordan's Instagram page and modeling portfolio. You can also catch him on Twitter, and who knows, maybe you'll spot him in an ad one of these days.

In the end, we'd argue that Jordan's either a total Bachelorette fan favorite or the most despised "character" yet to appear on the show. If you ask us, though, we'd rather have a room of smizing Jordan Kimballs than, say, a room full of milk-jugging Chads or glitter-throwing Krystals. Just sayin'.