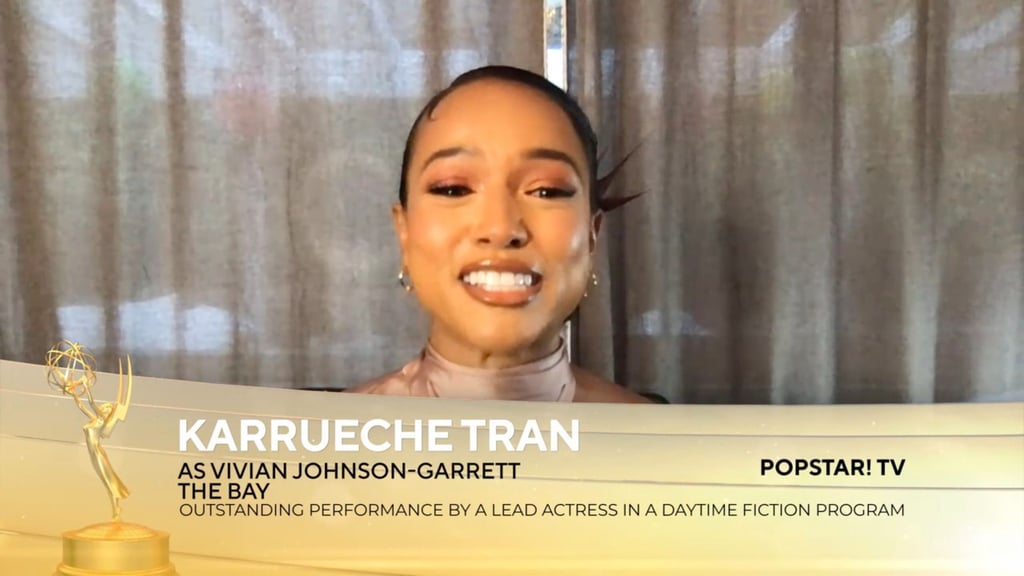 Karrueche Tran is officially an Emmy winner! During Sunday's Daytime Emmys, the 37-year-old took home the award for outstanding performance by a lead actress in a daytime fiction program for her role as Vivian Johnson-Garrett on POPSTAR! TV's The Bay, making her the first AAPI actress to win a Daytime or Primetime Emmy for the category. Naturally, Tran was overjoyed with her history-making win.

"The icing on the cake was finding out I'm the first AAPI lead actress Emmy winner in both Daytime Emmys and Primetime."

"I'm so thankful and so blessed and so grateful," Tran said in emotional speech. "I have to thank my The Bay family who have believed in me since day one when nobody did at all . . . and here we are, I just won an Emmy." Tran also shared her excitement on her Instagram Stories, writing, "I won a f*cking EMMY you guys . . . I just . . . I can't even think straight right now omgggg."

In a separate post on her feed, Tran expressed similar sentiments, writing, "When I got nominated I was soooo surprised and grateful but was like nah there's no way I'm gonna actually win.. the nom was more than enough.. but God had a different plan for me.. I'm still in shock!" She continued, "The icing on the cake was finding out I'm the first AAPI lead actress Emmy winner in both Daytime Emmys and Primetime.. excuse me WHATTT??! I f*cking made Emmys history.. that is HUGE and makes me extremely emotional.. to be a representation of a community that is so often overlooked and under appreciated brings me to tears.. WOW I am on such a high that I know will last for a long time.. I think the biggest take away from this blessing is not allowing it to get to my head or too comfortable.. this award motivates me to keep pushing myself beyond my limits.. to work even harder and become better than I was yesterday. I am so filled with love and joy you guys 🥺🥺🥺🥺🥺🥺❤️❤️❤️❤️❤️❤️."Congrats again, Karrueche!