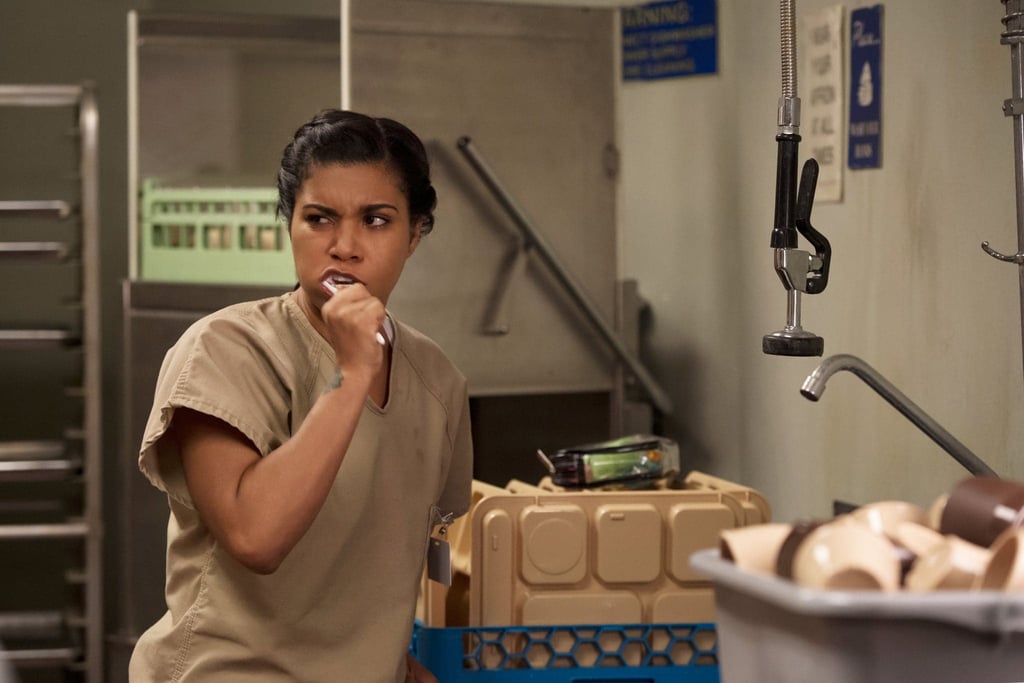 PS: Was there anything about season four that really ended up surprising you in a way that past seasons hadn’t?

JP: There’s no clear line as to who is a good guy and who is a bad guy anymore, because you get to see every angle. You get to see the sympathetic side of the villain. There are times you’re hoping certain characters get violent. Someone might throw a punch and you’re like, “Yeah!” but then another character does the same thing, and you’re yelling, “How could you do that?!” I find that emotional struggle — as a character, an actor, and as a viewer — made for a surprising season.

PS: Speaking of characters blending the lines between good and bad, the mild-mannered, typically nice Guard Bayley ends up killing Poussey in episode 11 in the midst of a prison riot. What was the vibe like on set that day while shooting such an emotional scene?

JP: It was over the course of several days and probably one of our longest days shooting in the history of the show. One day was over 24 hours, and the other one was 18 or so. Every single person, pretty much, is in that shot, so you get to see multiple reactions from different people. The vibe was intense and exhausting and heartbreaking, of course. You have a room full of a hundred people, so there’s that discomfort, and there’s no place to really chill, so you can never really relax, just in case they need you for one setup or another. It was as if we were really in that situation, because we were all really emotional, and we were all extremely tired and broken down. We were exhausted, defeated, and just trapped. You can’t leave. You can’t cross the street to the cafe to grab an iced tea, or whatever. We were in that room for days, so the tension and emotions were pretty close to what you think it looked like.

PS: Have you had any interesting fan responses since the new season came out?

JP: I was honestly waiting for hate mail! I thought everyone who was Team Piper Chapman was going to get on me, but it’s been the opposite effect. Everyone has been, like, “Yes, I’m so sick of her! I used to like her, but now I like you!” It’s been really supportive and loving. People are not just seeing the character and her development — which was awesome as a lover of the show to see that this character evolves and kind of comes out of nowhere — but also as an actress to see that people appreciated the work that I did. They understand that I’m not Maria, and I’m totally different from her, and I had to do a lot of transformation in a very short amount of time. They appreciate it, and that means everything to me, that they see how hard we work. We’re really working for you, to entertain you and bring you a story that you’re going to take with you and think about and hopefully change your mind about things.

PS: On top of being an actress, it was really interesting to learn that you’re also the frontwoman for the metal band Alekhine’s Gun. How did you get into that?

JP: Well I’ve been a musician my whole life. I started playing classical violin when I was 2 years old, and that was going to be my life. I used to practice day and night, literally before school, in school, after school . . . all day. But then, somewhere around 13 or 14 years old, I started doing this a lot [shakes her hand back and forth]. I would wake up, and my hands were totally numb. I stopped playing violin, but then I got into metal through a friend of mine in junior high. He said, “I think you’d really like this; it reminds me of classical music,” and hands me this King Diamond album. It was the most amazing thing I’d ever heard! It was like classical music, the story was amazing, and the musicianship was excellent, but it was so scary. I was afraid in my closet for like a week! It was insane. The music was so powerful and energetic and rebellious and loud. It really spoke to me, because my life was so structured, so I had this music that was kind of screaming for me and free in a way that I couldn’t be. It wasn’t so prim and proper and perfect. It was messy and strong, which is how I feel.

PS: I imagine the metal scene might be dominated by a lot of men. What is it like being a woman in that kind of environment?

JP: As women, we’re always going to have those obstacles. People will judge you differently and expect you to not be as good. They hold you to a different standard than they do everyone else, but hopefully more girls will realize that they can do anything they want, and they don’t have to worry about guys' opinions, or anyone’s opinions, if they want to play. If women continue to just follow their hearts and say, “Yeah, I want to do that,” they can just go for it. If you’re scared, your dreams will never come true.

Demi Lovato
Demi Lovato Talks Grammys and Hopes For the Future Ahead of Music Comeback: "I'm Ready"
by Monica Sisavat 14 hours ago