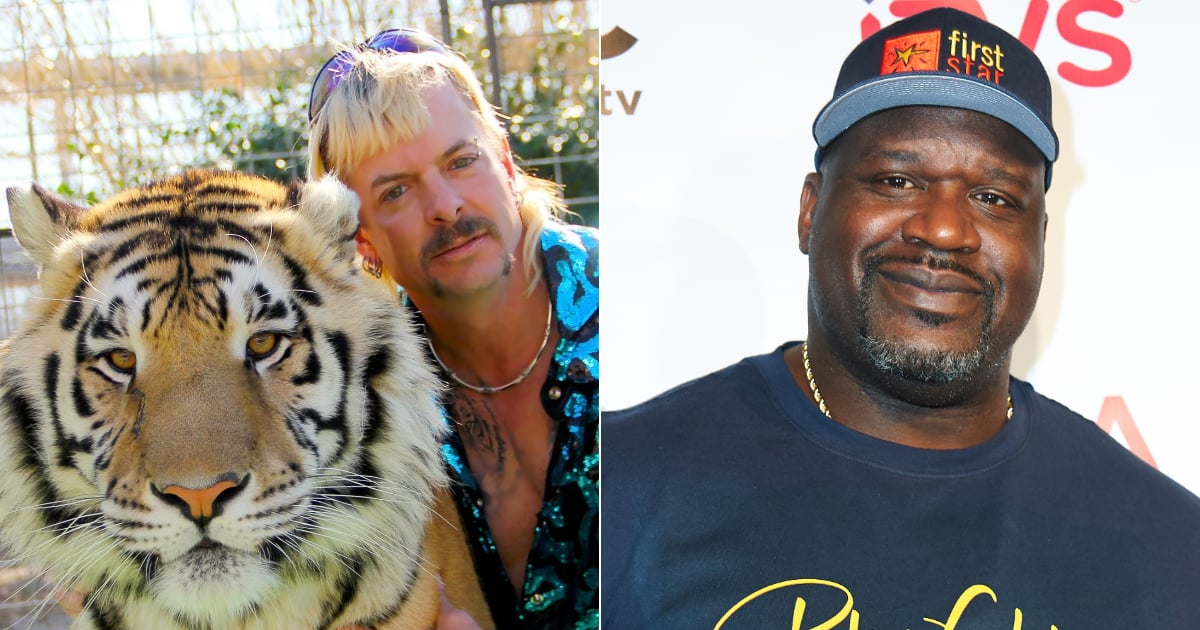 Among all the plot twists in Tiger King, one of the most random revelations was that basketball star Shaquille O'Neal knows Joe Exotic, aka Joseph Maldonado-Passage, the colorful and criminal character at the center of the wildlife drama. Shaq has a cameo in one of the episodes of the docuseries and is seen touring the park, taking pictures with Maldonado-Passage, and looking at the animals. After the uproar over his appearance in the show, Shaq has been trying to set the record straight with his own explanation of how well he does — or doesn't — know Joe Exotic.

"Listen, people are going to make their own opinions, but, again, I was just a visitor. I met this guy — not my friend. Don't know him," Shaq said on an episode of his podcast The Big Podcast With Shaq at the end of March. "Never had any business dealings with him, and I had no idea any of that stuff was going on." He revealed that his initial visit to Maldonado-Passage's zoo happened on a whim, after spotting a sign for the "sanctuary" while traveling on a team bus on the way to a basketball game, and that he stopped by, met Joe Exotic, took a few pictures, and donated food for the big cats.

Shaq insisted that he stopped going to Maldonado-Passage's park after finding out about the shadier stuff happening there, and that his main interest has always been supporting tiger conservation. "People that know me, they know I'm righteous. I don't harm tigers. I love tigers. I love white tigers. Do I put donations to these zoos to help these tigers out? I do it all the time. Do I own tigers personally at my house? No."

Back in 2015, Page Six revealed that Shaq had bought two tiger cubs a decade earlier, which apparently now live on a farm in Florida and are cared for by a keeper. He's occasionally shared pictures on Instagram of tiger cubs he's sponsored, as well as a "liger" — a cross between a lion and a tiger — who he named Charles Barkley.

Although Tiger King has been out for several weeks now, questions about Shaq's relationship with Joe Exotic have continued. In an interview on Conan, he reiterated his distance from the unsavory parts of the whole fiasco. "Being friendly to somebody doesn't mean that we're friends. I have no affiliation with him or his zoo. I like animals; every zoo in the country knows my name, I've made large donations for animals to have food, shelter, all that good stuff." As for his thoughts on Joe Exotic? "He was one of those guys that go to auditions every day and they want to be a star so bad they just do everything." Shaq's involvement in the big cat world has been controversial at times, but he insists that his brief appearance in Tiger King was just that: brief and insignificant.