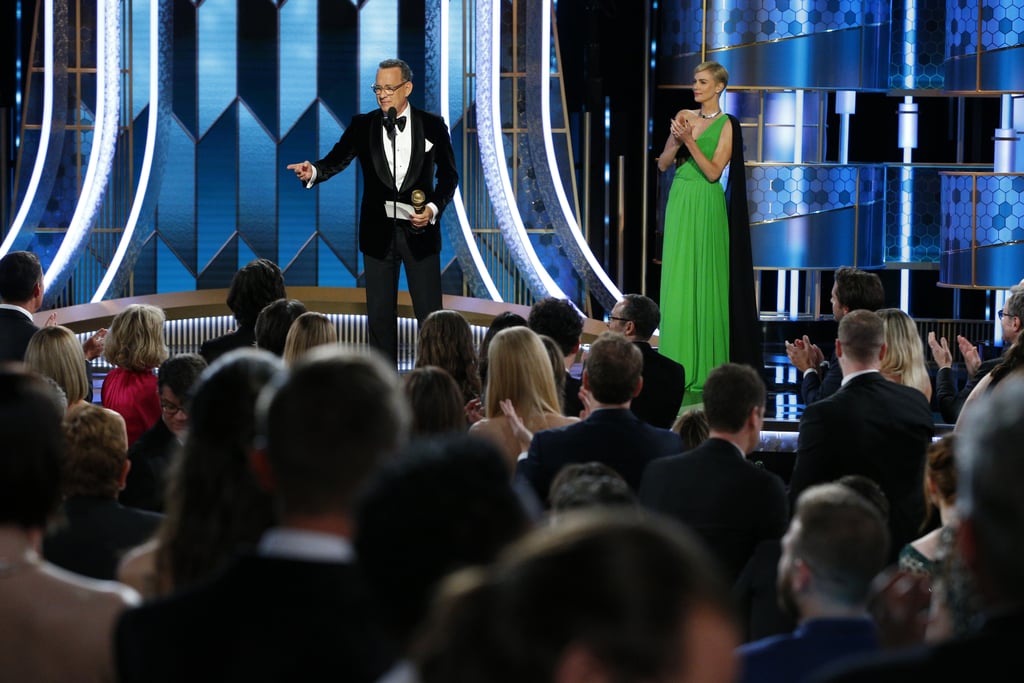 It's no secret that everyone loves Tom Hanks, and during Sunday night's Golden Globe Awards we all got a reminder of why. The 63-year-old actor received the prestigious Cecil B. DeMille Award during the 77th annual event, and his speech had the room laughing and crying in equal measures.

Related:
Tom Hanks Will Join Hollywood Legends as the 2020 Recipient of the Cecil B. DeMille Award

Bombshell's Charlize Theron presented Hanks with the award, recalling a moment from when they worked together on That Thing You Do!. The 1996 film was Theron's second-ever project, and the 44-year-old actress revealed that a terrible case of nerves caused her to flub her audition. She recalled how Hanks called a timeout to help her out, telling everyone he was the one who needed a break. Theron explained that the experience points to a truth we all know and appreciate, that "[Hanks] just makes the world a better place."

Of course, when Hanks went up to receive his award, he got a well-deserved standing ovation from the audience. The actor began his acceptance speech by noting that he "would pay to see [most of the people in the room] get their cars washed," before thanking his family.

"A man is blessed with a family sitting down in the front like that," he said, tearing up as he pointed to wife Rita Wilson and their five children. "A wife who is fantastic in every way, who has taught me what love is. Five kids who are braver and stronger and wiser than their old man is. I can't tell you how much your love means to me."

"I have checked the gate, the gate is good. Thank you."

Hanks went on to praise the great directors and actors he's worked with, including the late Nora Ephron and Penny Marshall. "You're a dope if you don't steal from everybody you have ever worked with," Hanks said. "And I have stolen from the likes of the people that only need one name, like Meryl, like Denzel, like Antonio, like Meg, like Julia." The actor also made sure to note that professionalism — such as getting to set on time — is "one of the most liberating acts you can give yourself" while working on a movie because it allows actors the time for preparation to "go there."

In the end, blaming his emotional speech on having a cold, Hanks closed his speech by referencing the old Hollywood term of checking the "gate" for a good movie take. "I have checked the gate," Hanks said. "The gate is good. Thank you." Watch Hanks's sweet speech in full ahead!

Harrison Ford
Harrison Ford Congratulates Ke Huy Quan on His Oscar Nomination: "I'm So Happy For Him"
by Sabienna Bowman 5 hours ago