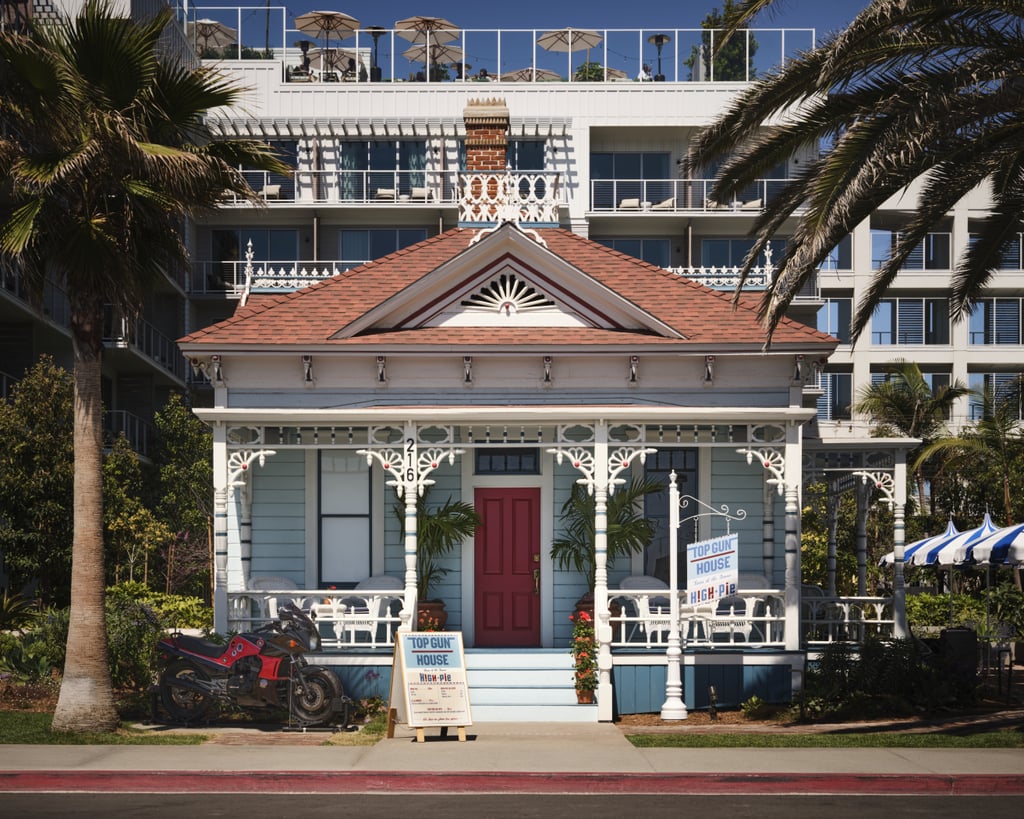 Calling all "Top Gun" fans — you can now visit the iconic house from the original 1986 movie. Located at the Mission Pacific Hotel in Oceanside, CA, the newly renovated 1887 beachfront bungalow, which was once home to Maverick's (Tom Cruise) love interest Charlie (Kelly McGillis), has been turned into a retro dessert bar called High Pie, and it's overflowing with nostalgia.

While fans of the beloved film will flock to take photos on top of the Yamaha Kawasaki Ninja ZX900 motorcycle parked in front of the home (it's an exact replica of the one Maverick rides to see Charlie in the movie) and obsess over all the "Top Gun" memorabilia located throughout, they'll end up staying for the fresh hand pies (all gluten-free, by the way) being baked inside with locally picked fruits like apple, cherry, blueberry, and my personal favorite, strawberry rhubarb. And if you're feeling adventurous, the menu also features a mini pie à la mode with homemade mascarpone ice cream, as well as several dipping sauces, including Charlie's chocolate, government cheese, lemon curd, and sea salt caramel.

Previously known as The Graves House, the "Top Gun" House is a Queen Anne cottage that was originally built in 1887 by Dr. Henry Graves as a vacation home. However, it was later renamed after Cruise and McGillis used it to film scenes for the movie in 1985. It was also relocated from its original address at Pacific Street and Seagaze Drive to the Mission Pacific Hotel, where it now overlooks the stunning Oceanside Pier.

In addition to having dessert at High-Pie, you can get the full "Top Gun" pilot experience for the hefty price of $16,000 with the hotel's "Need For Speed" package. The once-in-a-lifetime experience includes an action-filled weekend of private surf lessons with a professional surfer and skydiving with former Naval aviators, followed by a Dom Perignon rooftop celebration. Guests will receive two matching bomber jackets and Ray-Ban sunglasses, as well as a custom commemorative David Barr surfboard. The package also includes round-trip luxury car service from San Diego or Orange County airports and a two-night stay in Mission Pacific's Ethereal Suite.

The Mission Pacific Hotel, which was recently named one of Condé Nast Traveler's top hotels in Southern California, is also home to restaurants Valle, High/Low, and The Rooftop Bar, which is definitely a must visit if you're ever in town. High Pie at the "Top Gun" house is open from 10 a.m. to 8 p.m. daily. Ahead, see photos of what you can expect when you visit the "Top Gun" house, aka High Pie.