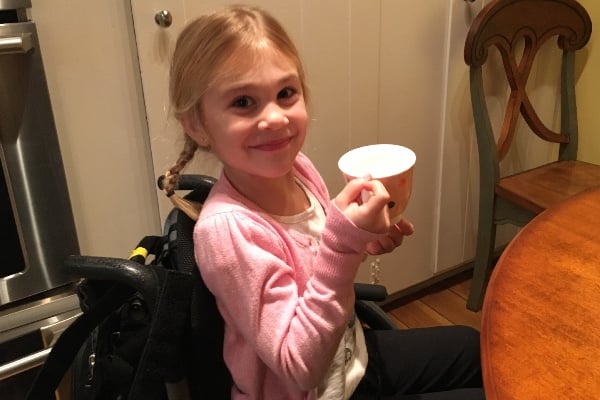 You'd never expect a routine at-home gymnastics move could take a tragic turn for the worst, but for 5-year-old Eden Hoelscher, what seemed like harmless fun quickly became a horrible accident. Last December, she became paralyzed from the waist down after doing a backbend — or bridge — on her living room floor. The damage wasn't apparent when Eden first felt the pain that brought her to tears. After being consoled by her 36-year-old mother, Kylee Hoelscher, she calmed down and joined her mother and sister on a drive to the store. Shortly thereafter, Eden began to complain about her legs and they turned back home, where Eden realized things weren't right.

Kylee told ABC News, "She kind of looked at me and said, 'Mommy, it feels like my legs are asleep,' but her legs were in this strange position, so I said, 'Eden, move your legs.' She said, 'I can't.'"

Kylee then rushed her daughter to the emergency room at Torrance Memorial Medical Center in Torrance, CA, where doctors told them about Eden's paralysis. In addition, Eden's bladder and bowels aren't functioning and she can't regulate her body temperature.

"It's just a backbend and it's just devastating. You go from watching your 100-percent independent kid who dressed herself, put her hair in a pony tail . . . to not being able to get out of bed, and it's almost impossible to bear," Kylee said.

Kylee couldn't understand how it happened since her daughter's always been an active kid in gymnastics and ballet. And doctors still are unable to explain, saying it was a rare occurrence.

Despite the life-altering accident, Eden's positive attitude is absolutely inspiring. Her neurological physical therapist, Julie Hershberg, is "blown away" by her determination and says Eden's "probably the hardest working child or adult I've ever worked with."

Supporters have been donating medical funds to Eden's GoFundMe page, "Stand for Eden," where over $20,000 has already been raised. We wish Eden a happy road to recovery — what a fighter!