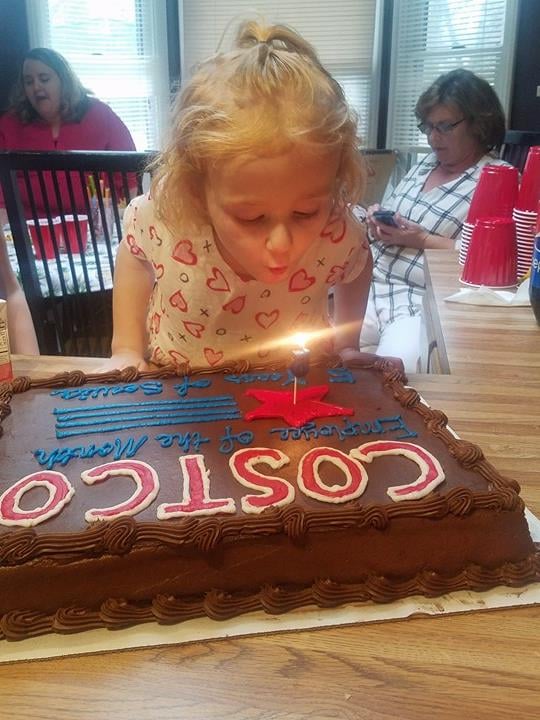 5-year-old Kimber Walker from North Carolina insisted on having a Costco-themed birthday party for two years straight until her mother finally gave in. "She loves Costco so much. She loves the pizza and the samples," her mother, Niki Walker, told POPSUGAR. After Kimber went through a lot of medical complications last year, Niki said Kimber deserved to have her Costco wish come true.

To bring her daughter's birthday party to life, Niki set up a mini Costco shop in their living space, complete with a cash register and printed dollar bills with Kimber's face on them. Kimber's epic Costco party also had sample stations for guests to do their food taste testing, which included Costco pizza and hotdogs, of course.

On her special day, Kimber was declared employee of the month and received a birthday gift from her local Costco store: her very own employee badge. "She was thrilled," her mother said. "[She] showed all of the employees the day she got it."

In addition to her employee badge and being employee of the month, there was a photo area set up for Kimber's birthday guests to take pictures underneath a sign that read just that. The party guests were also treated to their own membership cards, which they got to customize while stuffing their faces with Kirkland ice cream.

Next year, Niki told us that Kimber plans to have a less unconventional birthday theme. "She's thinking about having a Peppa Pig party." We say if it's anything like this epic birthday bash, Kimber's already in for another great event. Read on to see all of the Costco-themed decor and activities Kimber got to enjoy at her epic birthday celebration.