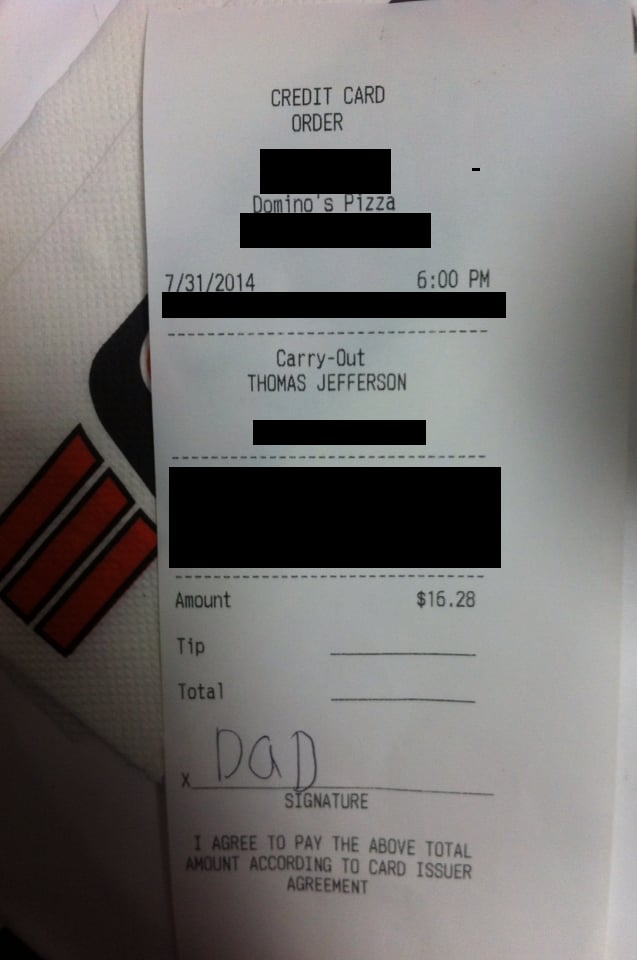 As a Domino's cashier, Jewel Cowart deals with her fair share of patrons — the good, the bad, and the rude. But recently, the 16-year-old interacted with arguably the cutest customer ever. Last week, a young boy and his father walked into the store to pick up their dinner. The child, whose name hasn't been released, strolled up to the counter and said he was picking up an order for Thomas Jefferson. Cowart remembered the little boy, who ordered dinner last week under the name Abraham Lincoln. She grabbed their pizza, printed their receipt, and waited for the father to sign. Instead, the little boy grabbed the pen and scrawled "Dad" onto the paper. Cowart says she had "an overwhelming feeling of adoration" as the child completed his transaction.

"He then took his pizzas, and said, 'Have a nice day ma'am,' and walked out," Cowart tells Today.com. "The child didn't even realize how cute it was."

Now that his receipt has gone viral, we're sure he's aware. Though hopefully next time he orders, he'll leave a little tip for Cowart.

Parenting HumorParenting News
Around The Web

Parenting Humor
The Wiggles Mashed Up a Tame Impala Song With "Fruit Salad," and Y'all, It Slaps
by Victoria Messina 1 day ago