Lauren Lonsdale, a mom from Mississippi, knows firsthand that kids say the darndest things, and unfortunately for her son, she has the footage to prove it. In a hilarious video she uploaded to Facebook back in 2017, the mom captured her kiddo belting out the lyrics to Sam Hunt's popular song "Body Like a Back Road" in the car. But there was one problem: he didn't exactly get the words right.

The now-viral video, which has amassed 13 million views since last year, is making its rounds on social media again, and boy, are we grateful. Lauren captioned it: "Sorry Sam Hunt my son doesn't understand the lyrics," and to say her kiddo butchered the chorus would most definitely be a hilarious understatement.

Viewers who listen closely can hear the, ahem, remixed version, and it's nothing short of hysterical. He puts his own spin on the tune by singing: "Body like a backhoe driving with my assh*les," and we have to admit, that might actually be better than the original version! 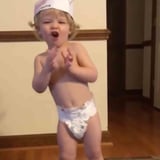 Parenting Humor
Max Greenfield's Daughter Didn't Study For a Test, and Asking Him For Help Proved to Be the Worst Option
by Alessia Santoro 5 days ago