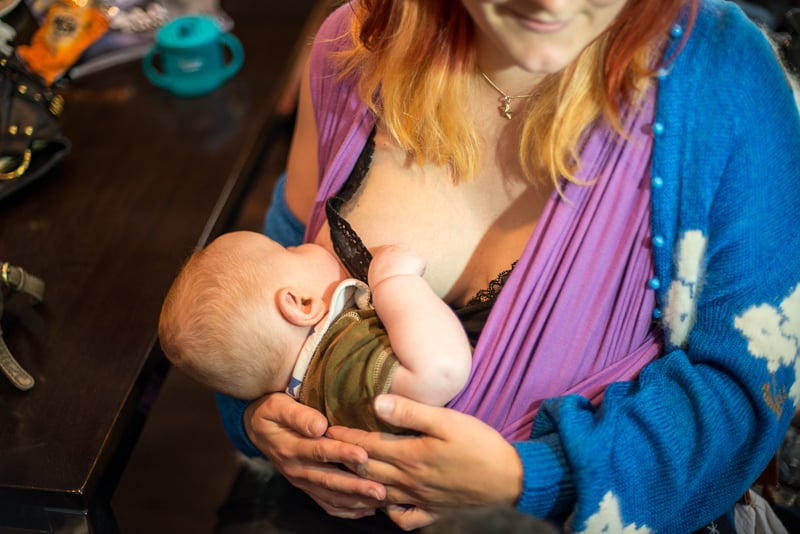 Great news for moms: nursing is officially legal in every single US state after Idaho and Utah recently passed laws deeming the practice of feeding your child in public A-OK. Although women are finally able to breastfeed in public in all 50 states, the question of "modesty" surrounding the act of breastfeeding came up in Utah, one of the last holdouts.

Rep. Justin Fawson got the ball rolling in Utah back in February when he managed to get the House Business and Labor Committee to pass the Breastfeeding Protection Act by a slim margin of 6-5. Originally, the bill gave the green light for mothers to breastfeed in public — regardless of if they're covered or not.

Related:
Breastfeeding Mom Demonstrates How to "Respectfully Nurse a Baby" in Public

"I don't feel like we should ever relegate a mom to a restroom to breastfeed their child," Fawson told KUER 90.1. "That's a big reason why I'm running the bill. I'm seeking to further normalize breastfeeding and allow moms to feed their babies as needed."

Unfortunately, not every lawmaker saw eye to eye with Rep. Fawson on the topic of mothers feeding their child sans cover. In the final edition of the Breastfeeding Protection Act, lawmakers cut the language that protected uncovered mothers breastfeeding in public. The amended law passed in the Utah House of Representatives 66-5.

"I think we can take a proactive stance here through legislation to promote the natural bond and health benefits of breastfeeding."

Rep. R. Curt Webb, one of the five male lawmakers who voted against the bill in Utah, couldn't seem to wrap his head around seeing a woman feeding her child without a cover on. "But this seems to say you don't have to cover up at all," he said. "[I'm] not comfortable with that at all, I'm just not. It's really in your face."

Thankfully, House Bill 448 was much easier to pass in the state of Idaho. Rep. Paul Amador, a dad to a 5-month-old son, was the driving force behind the bill that passed without debate with a vote of 66-0.

According to the Idaho Statesman, Rep. Amador told the House that Idaho was too far behind when it came to implementing progressive breastfeeding laws.

"Unfortunately, Idaho is the one state that currently has no protections for breastfeeding mothers," he said. "Personally, I find it disappointing that we're in 2018 and we still haven't passed this law in Idaho."

He continued: "I think we can take a proactive stance here through legislation to promote the natural bond and health benefits of breastfeeding for both mother and child. I also believe the health and nutritional choices of our families are best left as decisions for our families, not our government."

So what exactly does this mean for nursing moms? They can finally breastfeed any place, any time throughout the US.