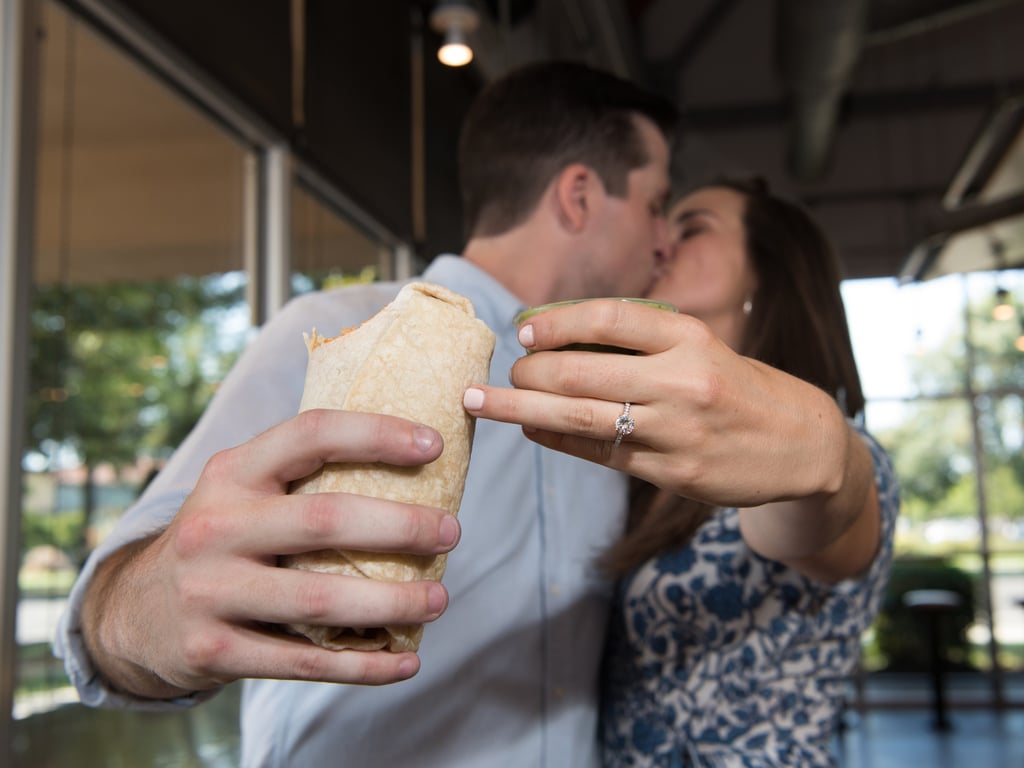 A Couple Who Got Engaged at Chipotle Took Ring Photos With a Burrito, and They're Amazing

Chris Piwinski bought a ring to propose to his girlfriend and high school sweetheart, Natalie Neach, back in January and was waiting for the best opportunity to pop the question when he thought of the perfect place to do it: their local Chipotle. He called the chain's PR department for help back in May, and after 70-plus phone calls back and forth, his dream proposal was planned for July 21 — and Natalie suspected nothing.

"Anyone who knows us knows we love Chipotle," Chris told The Sacramento Bee. "It's where we go. We love it. We eat there probably once a week."

Related:
Guy Who Went Viral For Destroying His First Kit Kat Wins the Internet Back With an Epic Proposal

On the day of the proposal, Chris took Natalie to a bunch of their favorite places, including a coffee shop and a winery, and planned on stopping at Chipotle for dinner. "He was very adamant on the timing of all of it, which was unusual," Natalie said, noting that it was also weird how many people were working at the restaurant that night. However, she said she "was not suspecting it at all."

Then, with shaky hands, Chris sat across from Natalie, barely touching his burrito, when Ed Sheeran's "Kiss Me" came on over the speakers. During the sweet song that has so much meaning for the couple, Chris got down on one knee with his cup of guacamole at his side, and Natalie said "yes" to spending the rest of her life with the fellow burrito-lover.

The couple's family and friends, who were spying via the restaurant's security camera, came out of hiding with balloons and an amazing cake with a fondant burrito on top of it. Talk about an epic proposal story!

Related:
Mom Had Baby in Chipotle Parking Lot, So the Restaurant Threw Her a Burrito-Themed Shower
0
previous images
-19
more images
Previous Next Start Slideshow
WeddingChipotleProposalEngagement
Around The Web

Fashion News
Here's What It's Like to Try On a Virtual Wedding Dress, Straight From a Bride-to-Be
by Sarah Wasilak 3 days ago

Wedding
My Destination Wedding Is Weeks Away, and Here's How Coronavirus Is Affecting It
by Jada Welch 54 minutes ago

Celebrity Couples
Just Married! See All the Celebrity Weddings of 2020 — So Far
by Monica Sisavat 1 week ago

by Perri Konecky 19 minutes ago