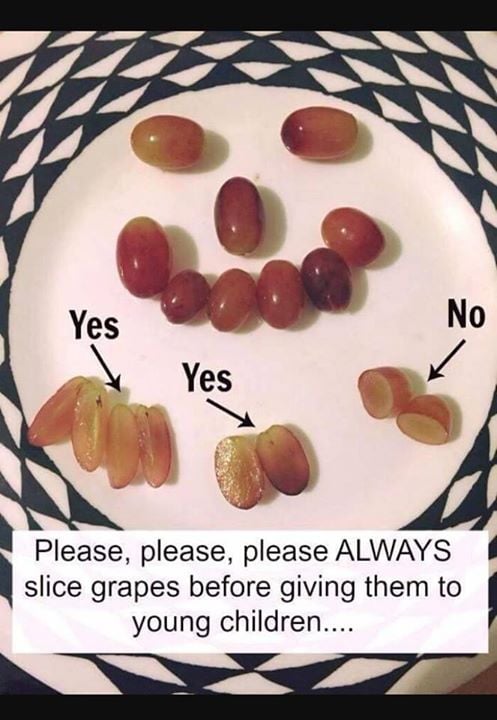 We all know we're are supposed to slice grapes before giving them to young children to prevent possible choking. But what if your little one somehow snags a whole one without you realizing? Or what if you've been cutting them — but just the wrong way?

Sophie Jackson found out in the most frightening way possible when her 2-year-old son, Jake, put a few grapes in his mouth and immediately started choking. In her Facebook post detailing the events, she chronicles the steps she took — some incorrect, according to the American Red Cross — that thankfully led to the boy's recovery.

She said she immediately put him over her knee and hit his back several times, and when that didn't work, she put her fingers down his throat. The Red Cross, however, advises that such "back blows" be done in conjunction with abdominal thrusts. Smacking the back alone could move the food into a more dangerous position and make the child stop breathing, as can rooting around in the child's mouth.

Despite not knowing the proper CPR protocol, Sophie — like any mom in such a position — was doing her best and certainly wasn't ready to give up.

I knew I needed to ring an ambulance. Mark got Jake and started hitting Jake's back while he was still unable to breathe while I rang an ambulance. Ellie was crying saying, "He's going to die, Mum, I don't know what to do." Jake was blue and purple and stopped struggling. He wet himself, then my mum forced her fingers down Jake's throat and managed to pop a grape while Mark was still hitting Jake's back. My mom's fingernail popping the grape made the smallest amount for room in Jake's airways, which enabled him to finally have the strength to retch hard and bring out the grape followed by blood and mucous. Jake could finally breathe.

Turns out, the grapes lodged in Jake's mouth were whole, but Sophie soon learned that even if she'd cut them as she always did — width-wise — he still could have choked. Turns out, grapes should be cut length-wise so they can more easily pass through smaller throats.

Jake is at home and doing well and Sophie's message is simple: "I really hope this encourages people to look into children's first aid and always cut grapes. . . . If he ever decides to eat grapes I will always cut them as shown."

Image Source: The Diary Of A Frugal Family
Child Health And SafetyParenting News