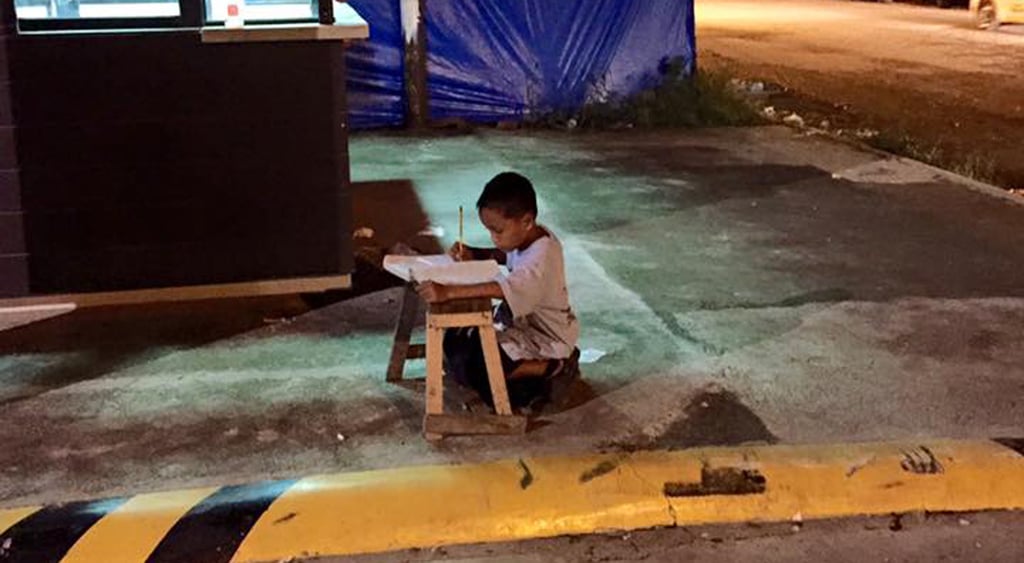 An image of a little 9-year-old Filipino boy studying at a tiny desk on the streets of Cebu, Philippines, has captured the attention and hearts of social media users everywhere. Joyce Gilos Torrefranca, who took and shared the photo, posted it to Facebook, where it quickly went viral.

According to ABS-CBN News, who tracked down the boy and his family, a fire had destroyed Daniel Cabrera's home, leaving his mother and two siblings no choice but to move into an eatery, where they also work for 80 pesos a day — the equivalent to $1.77 US. Left without a home or much money, the little boy uses the light from a nearby McDonald's to read and study every night.

"He is a very studious and determined boy," his mother told AFP. "He would insist on going to school even without his lunch money because I have no money to give. He always tells me: 'Mama, I don't want to stay poor. I want to reach my dreams.'"

Since the image went viral, Daniel and his family have received an outpouring of support including donations of school supplies, uniforms, a reading lamp, and even a scholarship to help him get through college. His story has become a symbol of hope and even inspired Joyce to share this message:

I didn't think that a simple photo can make a huge difference. Thank you guys for sharing the photo. With that, we were...