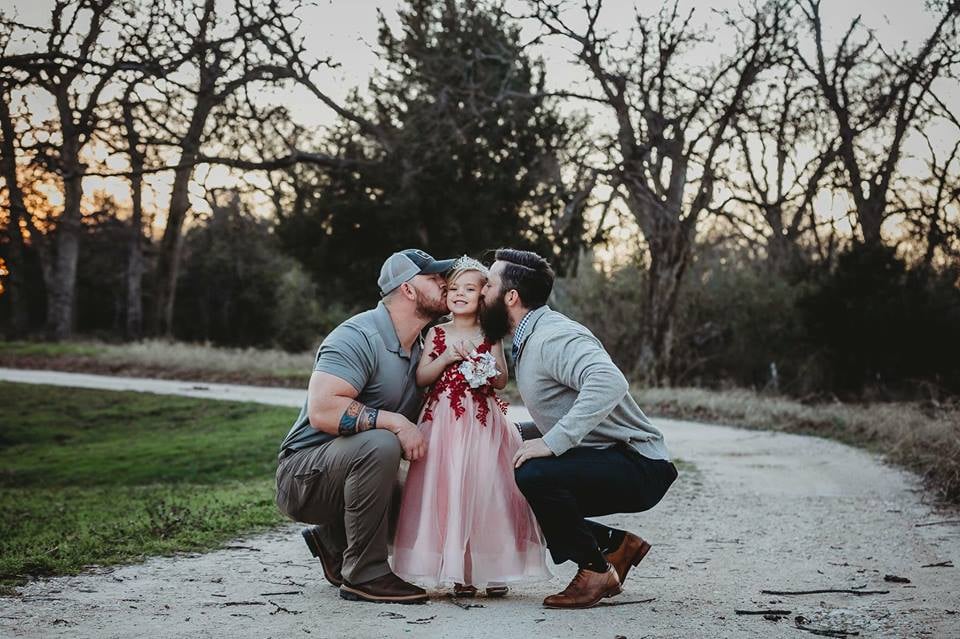 Willow Grace is one lucky girl — she has three loving parents: a mom and two dads. In a handful of photos taken by her mom, Sarah of Willie + Rose Photography, Willow can be seen with her two dads — her biological father, David (right), and her "bonus dad," Sarah's fiancé, Dylan (left) — and you can just tell from the photos how much love these two men have for their little girl.

"I want him to feel like he's here when he's not."

David lives in New Mexico while Sarah and Dylan live in Texas with 5-year-old Willow and their 2-year-old daughter, Tatum, but even with a 14-hour drive between them all, that doesn't stop David from being fully involved in his daughter's life. "Coparenting with Dylan and David has been pretty easy because we keep our communication super open," Sarah told POPSUGAR. "We FaceTime almost every day with David and we send texts and pictures and videos of Willow to keep him in the loop constantly and so that he can watch her grow up when he's not physically there. I think that's been important to all of us — communication is the key to making this work. I let David know everything. I want him to feel like he's here when he's not."

In addition to communicating while they're all apart, Sarah says David comes up to visit as much as his job allows him to, and they handle holidays however it makes sense for them so it works for all parties. And it's not just Willow who gets the benefit of two dads when David's around — Tatum loves him, too, and even calls him Dad. "He walked through the door the other day and brought both girls doughnuts, and she ran down the hall screaming, 'Dad!'" Sarah said. Dylan added: "Anytime he leaves — even if he's just going to the store while he's here — when he comes back she reacts like it's me coming home from work. It's almost that whole Golden Retriever vibe — whenever they see their owner, they just get excited."

"We're aware that this is a unique dynamic, but I couldn't be happier about it," Sarah said. "It wasn't easy at first; we had to work at it. I had to personally put my feelings aside and make Willow a priority with everything. As adults, it's our responsibility to be the parent and put our kids first — and not let our feelings affect our children." Dylan wrote on Facebook: "We have molded ourselves into one unique family, if only for the sake of our children to know the power of love. Not only did I gain a daughter, I gained a brother and a best friend. . . This is real, and this is us."

And for anyone wondering, Dylan said, "FYI David is SINGLE."

Family Life
Julia Fox Is a Mom of a 2-Year-Old, and Her Apartment Proves It
by Melanie Whyte 6 days ago