Although Hoda Kotb has been a household name for years, since adopting her daughter, 1-year-old Haley Joy, the Today show coanchor has given us a million more reasons to love her — most recently, because of the conversation she shared from when she and boyfriend Joel Shiffman decided to adopt a baby together. In an interview with Dr. Oz for an episode of The Dr. Oz Show, Hoda opened up about being nervous to bring up the subject of adoption with Joel, who already had a grown daughter in law school at the time. 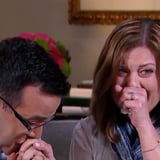 Once she decided to say it out loud, she knew it was going to be to Joel directly. "I remember I said to Joel, 'I want to ask you a question. I'm going to bring something up to you and don't answer me right now.' I said, 'Just let it marinate for a day or a week or as long as you need.' He said, 'OK.' I said, 'I can't hold it in, so I'm going to say it.' So I said, 'I'd like to explore adoption with you.' And he said, 'I don't need a day.'"

Cue our hearts melting inside our chests.

Following that conversation, Hoda and Joel went down the long, winding path to adopting their sweet daughter, Haley Joy, until finally, she was theirs. Hoda shared a touching story with Dr. Oz about the first time she was able to answer the question "Do you have any kids?" and be able to say yes:

"I had adopted Haley and I was walking to Duane Reade, Haley was at home with a babysitter . . . Forever people have asked me, 'Do you have kids?' And I've always said, 'Oh, I have great nieces and I love them.' I do love them. This lady stopped me on the street and I'll never forget it. I'm walking to get formula and stuff, and she goes, 'Hi, I watch the show.' I was like, 'Oh thanks.' She goes, 'Do you have children?' I just looked at this lady and I said, 'Yes. I have a daughter.' It was weird. I was sobbing. She was probably like, 'Wow.' It was like a random moment with a stranger on the street and it was just so important to say out loud, something I hadn't said yet, before . . . It was cool."

We're not crying, you're crying.