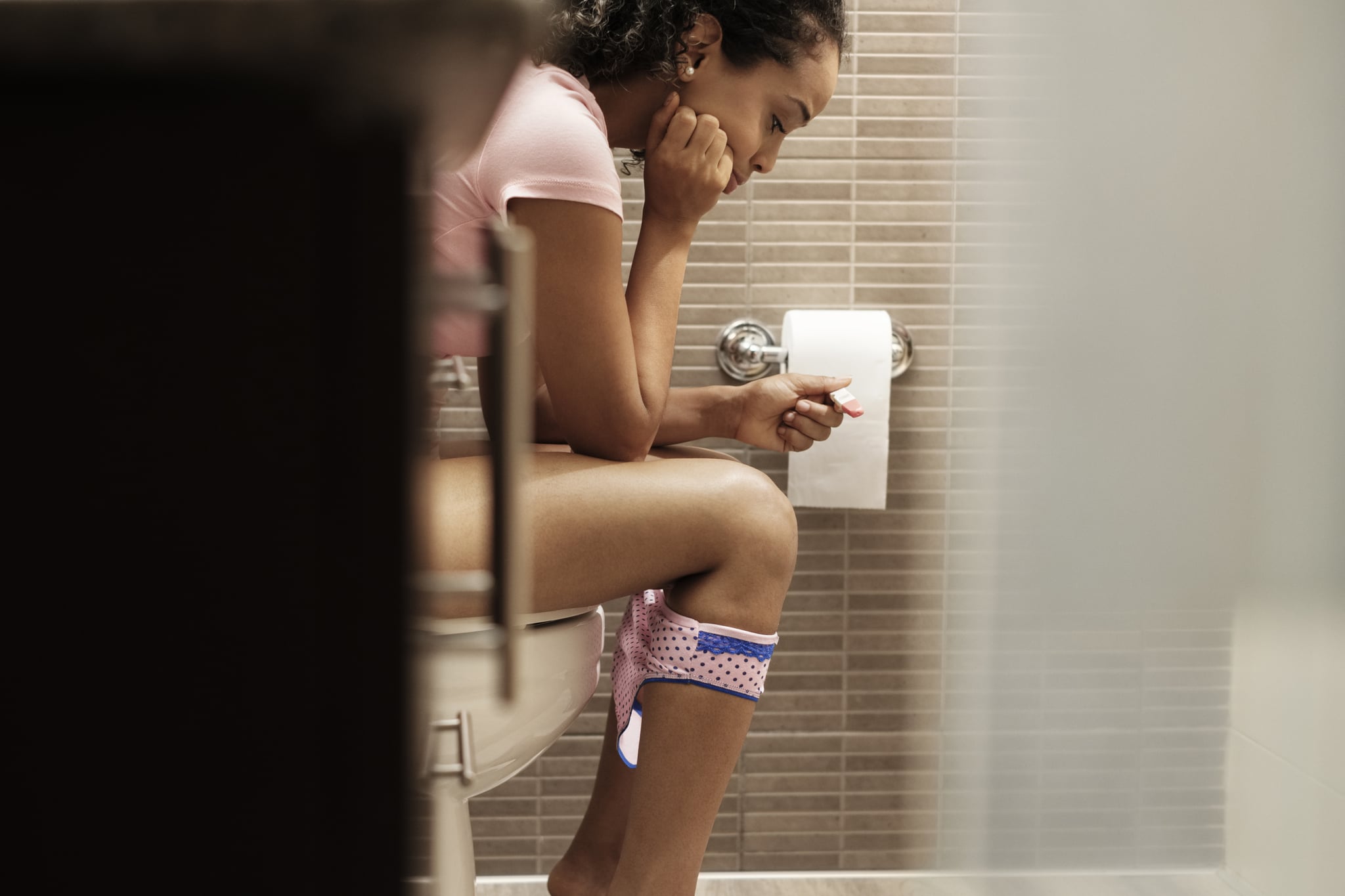 I had to have a friend tell me I was pregnant over dinner.

There I was, chomping down on a taco at a Mexican restaurant, annoyed that they didn't serve margaritas, while lamenting my inability to get pregnant when she gave me a curious look.

"Kate, you are pregnant," she said, matter-of-factly.

Related:
This Is the Stupidest Mistake a New Parent Can Make

I laughed it off. I had just finished telling her all the issues I'd been having with my body since going off my birth control pill:

I wasn't getting my period.

Yes, it's a telltale sign of pregnancy when you're "late," but mine didn't even show up. When I stopped taking birth control at the end of January after more than a decade of daily dosages, my body went through a roller-coaster recovery, one I assumed was still in progress. It was late March, and I still hadn't gotten a real, natural period. I had a few friends who waited months, one more than a year, to get their periods postpill, so I'd just assumed my menstrual cycle hadn't kick-started yet, either.

I'd put on weight.

I was definitely feeling a bit squidgy lately, but I'd attributed it to what most breathing adults blame — Winter. I let myself really enjoy the holidays, and when I noticed that those extra pounds hadn't shed off like they usually did by this point, I figured it was just my youthful metabolism closing up shop for good now that I'd turned 30.

All I wanted to do was nothing. The previous weekend was spent primarily on the couch, binge-watching Netflix in between spontaneous naps. One of the days, I never even got out of my pajamas. I certainly noticed that I was more lethargic than usual, but I blamed my slow-but-steady weight gain and, again, Winter. (It really is the ultimate scapegoat for being healthy, isn't it?)

My boobs were sore.

OK, I was probably in some form of denial about this one. Still, I'm not completely oblivious. I just attributed the symptom to something else. Tender breasts — along with irregular periods, weight gain, and lethargy — are typical side effects of getting off the pill.

No one was getting any.

Occasionally, some of these symptoms — including one day when I seemed to have superhuman abilities to smell the garbage in the trash chute down the hall of our apartment building (another shared symptom of going off the pill and pregnancy!) — would spur me to ask my husband if I might be pregnant. And then we'd have a good laugh. We'd hardly had any sex to speak of during this time due to crazy work schedules, my aforementioned laziness, and my crummy body image thanks to my aforementioned weight gain. Plus, although we had decided months ago to start trying to have a baby, we were waiting for me to get that elusive period before we really got down to business.

I was certain I couldn't possibly have conceived because I hadn't had a single bout of morning sickness. Of course, it turns out it's actually more likely that pregnant women never experience any nausea — only 25 percent of women do.

So, there I was brushing off my friend's outlandish statement that I was, without a doubt, pregnant. I couldn't possibly be and not know it.

The minute I got home from dinner, I took a pregnancy test, and it was positive. After my husband, this friend was the first person who heard the good news, though it wasn't exactly news to her.

Since then, when joking about the circumstances that led me to discovering I was having a baby, many people ask how I could have possibly not known. Sore boobs and weight gain?! Come on! It's obvious!

I was more certain that something was wrong with my body than I was with the idea that it could be very much right.

I can chalk some of it up to the fact that I was still nervous about getting pregnant, and maybe subconsciously, I blamed some of the more telling signs on the pill. But, the bigger issue was that I was more certain that something was wrong with my body than I was with the idea that it could be very much right, going through the normal, natural first stage of pregnancy.

Because I'd known people, this friend included, who'd had issues getting pregnant, I had spent the last few years with a sneaking suspicion that I could very well be infertile. I had absolutely no basis for it — other than the innumerable articles I'd read about age-related risk factors and the countless stories I'd hear of women struggling through IVF treatments — but it was nonetheless a genuine concern. Even now, I have friends who reveal to me that they're nervous they'll have trouble, including one who asked, "I spent my whole life trying not to get pregnant, but what if I never can?!" It was a thought I'd had so many times in recent years.

The truth is, women of a certain age and with a certain ticking clock are too inundated with all the noise of infertility when, according to the CDC, 96 percent of married women are blissfully fertile. Yes, conception issues are a possibility for women, and those issues become more likely with each passing year, but when that's all someone hears, they might begin to think that there's no chance they'll have an easy time of it.

Well, I clearly did. And very likely so will you.

Healthy Living
I'm the Healthiest I've Ever Been, but You Wouldn't Know It From the Scale
by Avery Johnson 13 hours ago

Netflix
As Someone With Mild Cerebral Palsy, Special Helped Me Feel Seen For the First Time
by Kelly Douglas 19 hours ago

Makeup
Jessica Debrah on Launching Her Brand: "I Wanted to Make a Difference in the Beauty World"
by Kelle Salle 19 hours ago