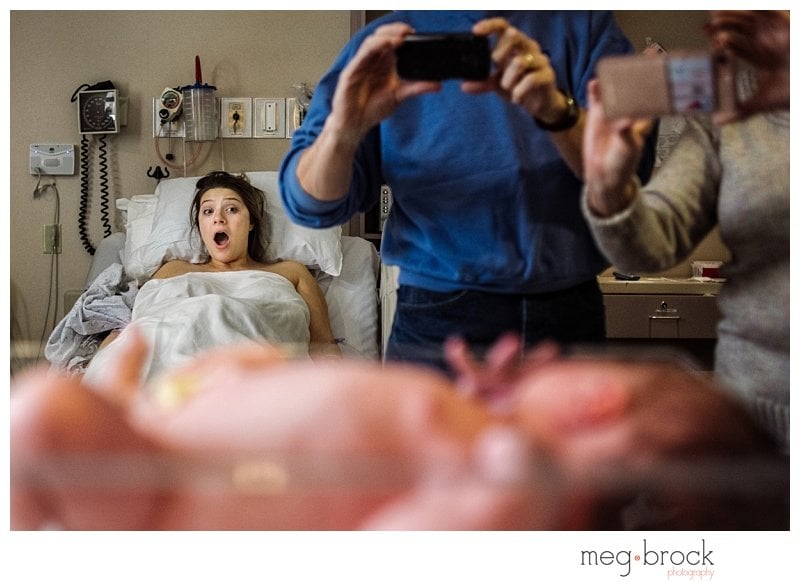 Pennsylvania photographer Juliana Laury needed someone to take photos at her first child's birth, so she enlisted the help of a photographer friend, Meg Brock. It must feel weird to be the subject of birth photos after photographing so many yourself, but Meg didn't disappoint, and Juliana has some seriously stunning shots from her son's birth — including one very creative and very funny candid capture taken while Johnny was being weighed and measured.

"Juliana had photographed the birth of my daughter two years ago, and I was honored when she asked me to photograph the birth of her and her husband Colin's first baby. They were thrilled about becoming parents, and the fact that the baby's gender was a surprise added even more excitement to the birth," Meg told POPSUGAR. "Johnny was the first grandchild on both sides of his new family and all four of his grandparents had been in the hospital waiting room all morning, so excited to meet their first grandchild. It was an amazing moment when Colin came out and told everyone they'd had a healthy baby boy."

Related:
Mom's Reaction to Delivering an 11-Pound Baby Boy at Home Is Perfect

With everyone in the room marveling over Johnny and shedding "many happy tears," the nurse took the baby to record his height and weight, and Meg noticed two of his grandparents pull out their phones to take a picture of the moment. So naturally, Meg focused her own camera on them.

"I quickly captured that image and then in a split second realized if I stepped back, I could capture Juliana's reaction to learning Johnny's weight while including Johnny and the cell phones in the frame," Meg said. "I was really happy to capture such a playful image that nods to modern life meeting the timeless amazement of motherhood. I don't remember what Juliana said specifically, but I remember her being amazed (as most new mothers are) that she was able to grow and deliver this incredible human being with her body."

Amazed is an understatement — you can practically see the shock on Juliana's face, and for good reason: Johnny, who was delivered vaginally, clocked in at nearly nine pounds! You go, mama!

Related:
You've Got to See This Mom's Amazing Reaction to Having a Baby Boy
Previous Next Start Slideshow
PhotographyChildbirth