It seems like nowadays people are constantly commenting on women's postbaby bodies — but someone body-shaming a child?! That's a whole new low. Writer and mother Caroline Stanley of Refinery29 shares with us the effects of strangers constantly making comments on her 8-month-old daughter's size. 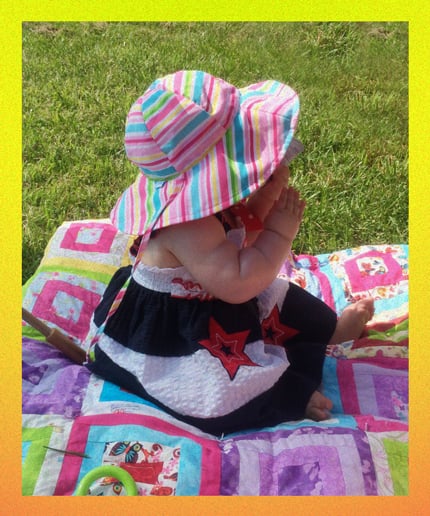 The first time someone fat-shamed my daughter, it made me laugh. We were standing on the subway platform, waiting for the train, and she was about 6 months old, happily hanging out in her baby carrier. The young women who approached us were laughing and whispering to one another when the bolder of the two stepped forward.

"Yo, your baby is mad chunky."

Here's the thing: my baby is mad chunky. She's also absolutely perfect, if you ask me. I love her body — especially her arm rolls and this little place on the back of her neck that is the softest thing I've ever touched. And, if that bizarre moment on the platform had been an isolated incident, there's no way I'd be writing this story. But at this point, I can't take my daughter out in public without some stranger commenting on her size; nearly 50 people — all women — have come up to us so far. Apparently, the fact that she's a little over 22 pounds blows a lot of minds.

Some of the people who approach us seem to think that calling her fat is a compliment, like we're living back in medieval times and our chubby baby is a symbol of our wealth and abundance. More disturbing are the ones who are trying to console me. I can't tell you how many variations I've heard of "Don't worry. That weight will all fall off of her once she's able to walk." I even had a woman go as far as to explain that her daughter was once a big baby but grew up to weigh only 98 pounds. She said it like she was trying to give me hope.

Related: Rich Parents Want Their Kids to Be Rich — but Not Too Rich

My daughter has been called mushy, huge, enormous, gigantic, and a chunky monkey, among other things. The other night in the park, a nice old lady who didn't speak much English felt the need to pantomime her shock over the fact that my baby was so large at only 8 months old. From her enthusiastic gesturing, it seemed she also wanted me to know that it's OK; she has a grandchild with a really big butt, too. The situation was so ridiculous that I found myself laughing again. But I was also just a little bit heartbroken. How would my daughter feel if she could understand what all of these people were saying? At what point do our body-image issues begin?

Now is probably the time to tell you that I've struggled with my weight my entire life, so I know firsthand what it feels like to be judged for your size. However, in the years leading up to my pregnancy, I was finally, finally able to feel comfortable with myself. I was in control of my body, and it was a glorious thing. I could jog a few miles without really breaking a sweat. I could walk into any store and find something that would fit (which had not always been the case).

Related: You Must See These Incredible Portraits of Sleeping Parents-to-Be

I foolishly thought I was done with my lifelong battle with the scale. Then, I gained over 40 pounds in what felt like an instant — and while 20 of those pounds miraculously vanished in the weeks following my daughter's birth, the rest of them didn't.

Now, I have a closet of clothes that are too tight, due to oddly placed baby weight that refuses to budge. When I look in the mirror, I am furious. I feel like the body I had finally tamed has betrayed me. Isn't that funny? In the wake of my biggest physical achievement (I created a life!), I find myself burdened by the same old crap: obsessing over jeans sizes and deleting unflattering photos. Part of that is my own vanity. But I also don't want my to daughter to look at those images one day and be embarrassed that she had an overweight mom.

Related: What It's Really Like to Move Back in With Your Parents

My relationship with my body will always be complicated, but I'm confident I can get back to a better place, preferably before my daughter is old enough to pick up on my negativity. (I figure I have less than a year at this point; the kid is very perceptive.) That part is on me. In the meantime, I'd like to officially call bullsh*t on every single person who has felt the need to comment on my baby's size. Obsessing over her weight, even briefly, makes you a creep. She doesn't need your voices in her head — and for that matter, neither do I. She's a healthy, happy baby. Her body is completely off limits to you.

We live in a time where body shaming is ever present — especially for women. I find it deeply sad that people feel so comfortable extending that attitude toward an infant. My daughter deserves a chance to find self-confidence and a sense of self-worth without your commentary. I hope that as she makes her way in the world, she's smart and independent enough not to give a crap what you think — and if I do a really good job, that she's bold enough to tell you as much.

Related: Is Your Relationship With Your Parents Normal?

Simone Biles
No, Simone Biles and the US Gymnastics Team Didn't "Settle" For Silver — They Won It
by Maggie Ryan 10 hours ago

Netflix
As a Tamil American, I Wish Never Have I Ever Was Around When I Was Younger
by Ivanka Perez 6 days ago