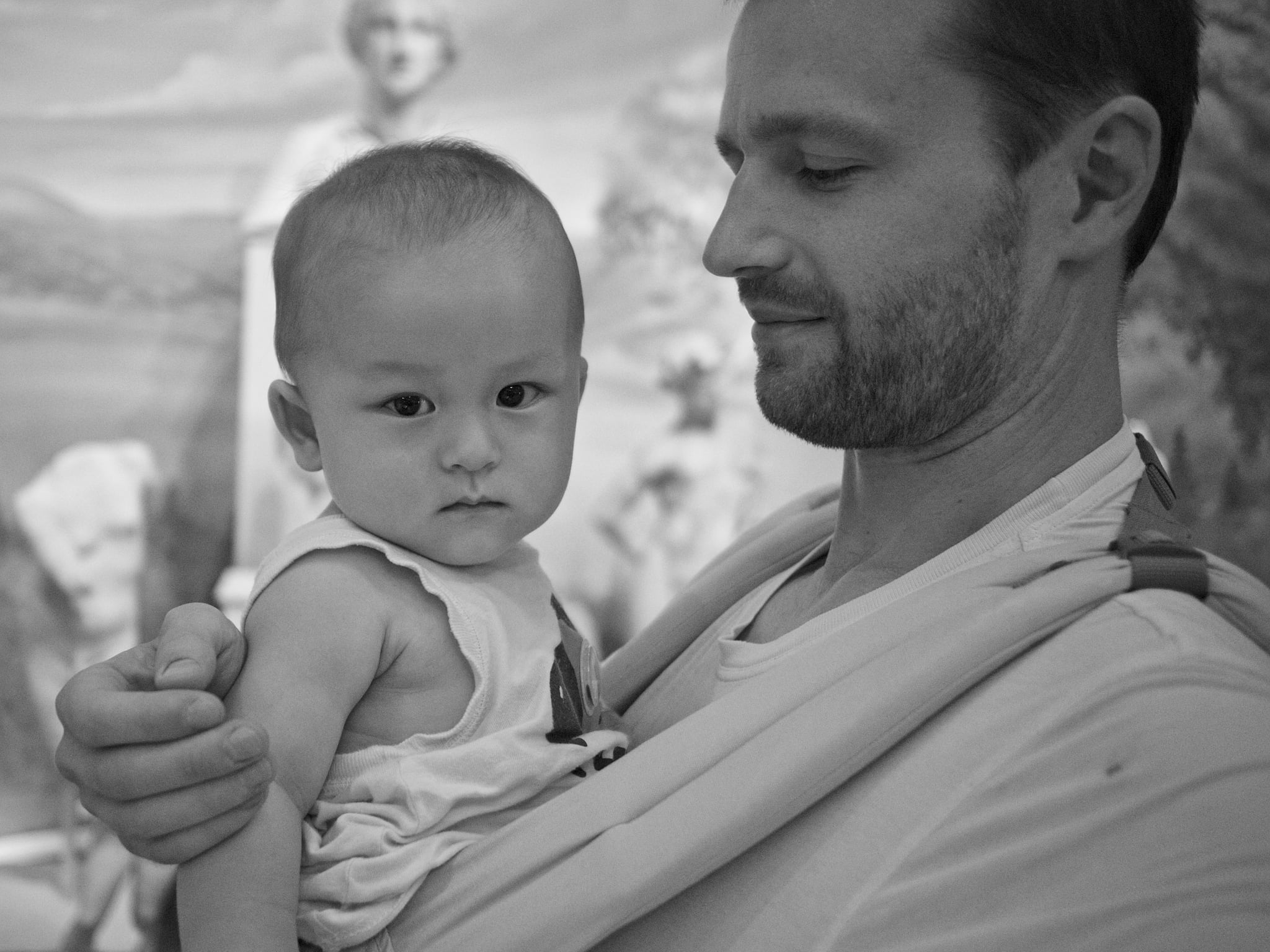 You've probably heard the old adage before: "a woman becomes a mother when she finds out she's pregnant, but a man becomes a father when he sees his baby for the first time."

It took my husband a little longer. OK, a lot longer.

Long before we ever talked about starting a family, I knew he would make a good dad. Historically amazing around kids, he just seemed like he'd be a natural. Something about him made me quite certain he'd know just how to kiss boo-boos and read bedtime stories. Whenever I'd get pregnant, I could just see him dusting off the Dr. Seuss books he'd kept from his own childhood to recite to my growing belly, and I just knew he'd spend as much time test-driving strollers as he did our sensible, family-friendly car.

But, when I did get pregnant, he didn't crack open The Cat in the Hat once, and when it came time to research baby gear, he showed little interest and left the decisions to me. I tried not to blame him. As much as I was excited to have a baby and was very much in "mom" mode, I hadn't been flooded with all those maternal vibes so many women claim course through their veins for nine straight months. I figured that old saying was true, and he just hadn't become a father yet.

When I gave birth, when he'd see his baby for the first time, it'd click.

And it did, for a few minutes anyway. As the nurses were cleaning off our little girl, I noticed my husband — who never cries, save for an errant tear on our wedding day — was making a strange face. It took me a moment before I realized he was getting choked up. There it was! He'd become a father! Hooray!

It wasn't until we got home from the hospital — when the "new baby smell" wore off and the sleep deprivation kicked in — that I noticed something was off. My husband was incredibly attentive to both me and our newborn, but he didn't seem to get all googly-eyed, like I did, at the sight of her. Whereas I could hold her for hours, his arms got tired. It was hard to break my gaze on her, but he was more easily distracted. He was as involved as the most hands-on of fathers, but I had this sneaking suspicion he didn't actually love our baby. Or, rather, he loved her like you do a great aunt you see once a year around the holidays, but he maybe didn't have that heart-bursting, soul-filling, mind-altering love connection I thought he should have.

One afternoon (or was it morning? or was it 3 a.m.?), I was sitting in the nursery room watching as he changed her diaper. She was a month old, and I was absolutely smitten with her. She did something adorable — maybe a gurgle, maybe a kick of the pudgy leg — and I couldn't contain myself.

Maybe he hadn't heard me. I repeated myself.

He made one of those sighs for when he knows he's about to begin a fight he had no plans of starting. "Yes, I love her."

He was clearly only telling me what I wanted to hear. I began to spiral. "How can you not love her? She's your daughter!"

He tried to make his point — that it wasn't a light switch he could just flip on the minute she was born, that he wasn't like me and it takes him longer to warm to people. (To his credit, I tend to love things indiscriminately and that week alone said "I love you" to both a sushi roll and a FedEx carrier.) That he needed to get to know her better. That it's hard to love something that just lies there, crying and pooping and making your life hell.

I'm certain he was half-joking with that last one, but it didn't matter. I was convinced I was wrong about my husband — he wasn't a natural father and he'd never truly love our child. I sulked for days, trying to push the realization from my mind.

A few weeks passed, and a friend came to visit with her 2-year-old daughter. From the minute they set foot in our house, my husband was all the things I'd imagined he'd be as a dad. He pulled out books for her to read, and when he discovered her fascination with door knobs, he took her around the house, showing her every one. He even let her "help" him make pizzas, patiently holding her up as she grated mozzarella cheese into giant clumps. It was a breathtaking sight. Sure, he didn't give too many glances toward our baby that day, but I forgave him that. Not only was she sleeping during that entire encounter, but I knew then that her time would come. Eventually, he'd fall in love with her the way I did.

Even if it took two years, he'd get there.

Turns out, it only took four, maybe five months. By that point, our baby was doing a lot more than crying and pooping — she was belly-laughing at daddy's funny faces, babbling along to his gibberish, and crinkling her nose in glee when he'd scoop her out of my arms, desperate for his turn with her. Every day, our child is more interesting than the last. And every day, I get to watch my husband grow into his role as a father . . . because, like love, it doesn't always happen at first sight. And even with adorable babies, we shouldn't expect it to.