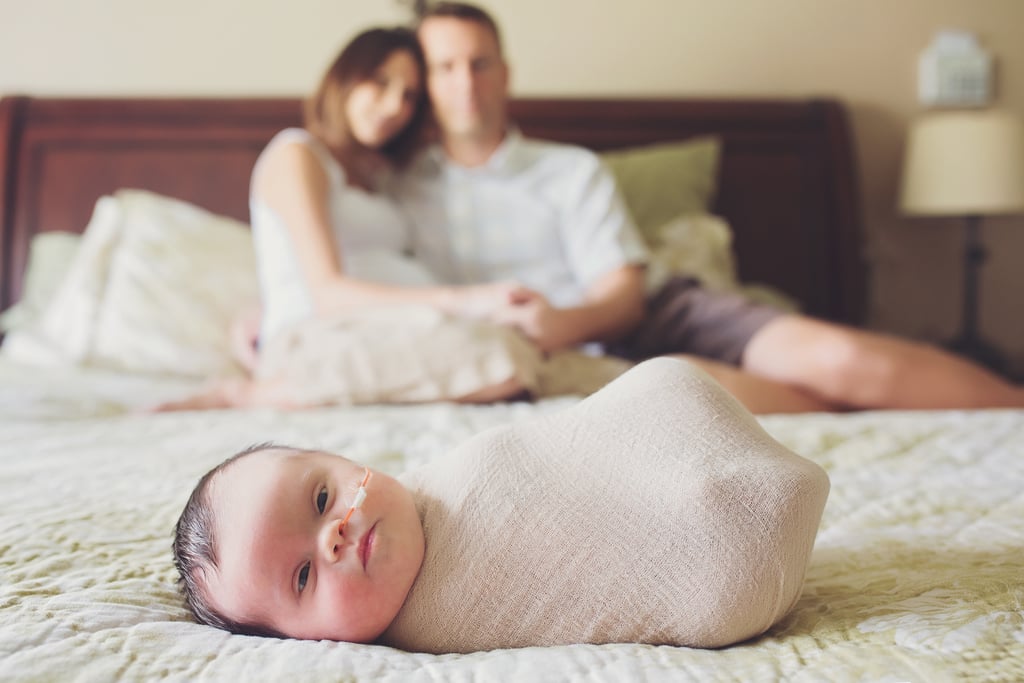 The Baby With an Inoperable Brain Tumor Who Captured Our Hearts Will Live!

When Erika Jones was nearing the end of her pregnancy, she never expected to be taking family photos at home with her new baby. And not because, at 18 weeks, they'd been hit with devastating news that their unborn child was diagnosed with Down syndrome. They never expected to be taking such family photos because, at her 30-week ultrasound appointment, months after they had "mourned the loss of a 'normal' baby," her doctor discovered a rare and fatal tumor on the baby's brain.

"Our hearts were broken," Erika — who was already a mom to 2-year-old Audrey with husband Stephen — said of the bleak prognosis. When she went into labor in early August, the parents didn't think they'd have much time with their newborn baby girl, whom they named Abigail.

Erika recalled the feeling of pure joy "when a beautiful pink baby girl came out screaming — and pooping!" It was a surprisingly lively arrival: "She is moving, nursing, squawking, sticking out her tongue, opening her eyes, holding our fingers, and doing all things a baby does. She has blown us away and surpassed every expectation."

Still, an MRI confirmed that the tumor was inoperable — too invasive and aggressive — and the neurosurgeon all but gave Abigail a death sentence by recommending the parents take her home and "cover her with love."

That they did, but they also got a second opinion. Doctors at Boston Children's Hospital determined that the tumor was very likely benign. "We repeated an MRI, which again made me suspicious that the tumor was not, in fact, malignant," Dr. Alan R. Cohen told ABC News.

They decided to operate and were able to remove the tumor completely. Now, a month after the newborn baby made headlines around the nation, she's thriving. The tumor is not expected to return, and her heart-wrenching death sentence has been reversed.

"Her prognosis is excellent," Cohen said. "This is a story with a very sad beginning and a very happy ending."

And even though they sought photographer Mary Huszcza to take family photos, just days after Abigail's birth, with the idea it would be all they had of her to cherish for years to come, the images can now serve as a poignant reminder of what could have been.

"The shoot was so very relaxed and peaceful," Mary told us. "Often, when photographing families, the parents can be very anxious about everything going 'just right.' All the Jones family was concerned with was soaking in sweet Abigail. I've never seen two parents more in love with their child. Stephen just couldn't stop kissing her and telling her how much he loved her. It truly was a beautiful experience and I was blessed to be part of such intimate moments."

And as beautiful as those moments turned out, even Erika, at the time, recognized how tragic they were: "We don't want to lose our daughter. We want to see her laugh, dance, fight with her sister, ride a bike, go to school . . . we want to see her life. But most likely, her whole life will be weeks or months, not years. Our hearts are broken and ache for the time that we don't have."

Thankfully, they now have that time back. Before discovering little Abigail would survive the tumor, Erika had said, "we have smothered this little one with love and kisses and will continue to do so every moment we get." As much as this family's path has transformed, it's very likely that plan hasn't changed.