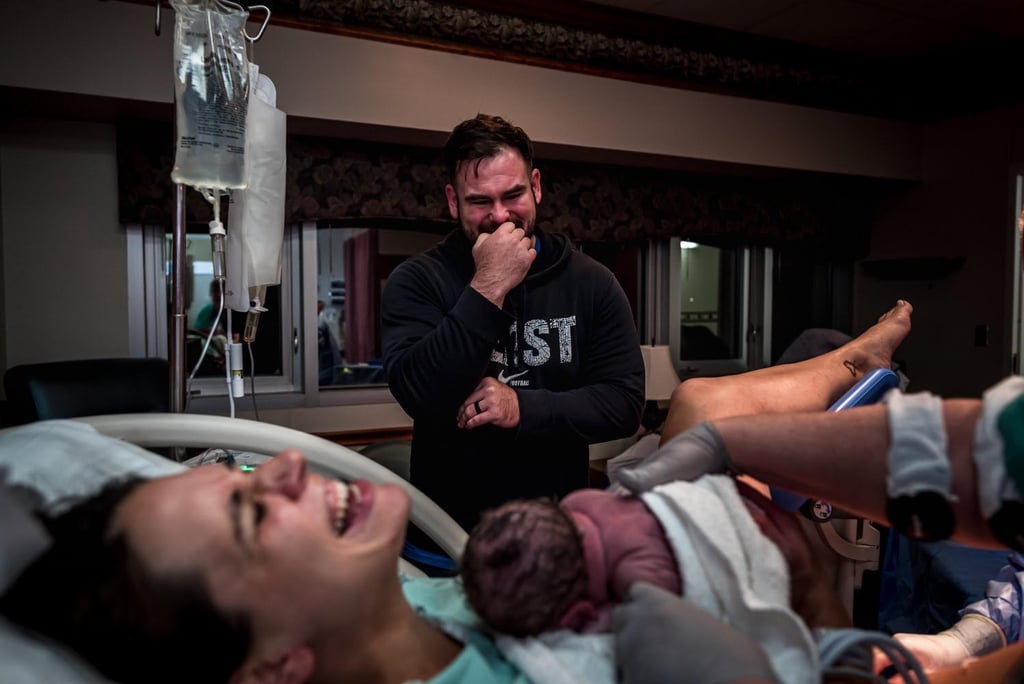 As a birth photographer, Dannielle Hale knows how nerve-racking going into labor with a child can be for first-time parents. Recently, Karissa and James — a couple whose birth she recently captured — were going through those exact feelings when she was finally told to push. High on the rush of emotions that come with becoming a father for very first time, James had the most powerful reaction to seeing his daughter come into the world. Thankfully, Dannielle was there to preserve the moment.

"I watched this dad pace the floors and stand there helplessly as his wife roared through the waves," wrote Dannielle in her Instagram caption. "I watched as James nervously held Karissa's hands and whispered to her about how awesome she was doing. I watched as he held her up during the waves and applied counter pressure for her, even though he was still scared himself."

"The dad was even more nervous now but once it came time to push he really got it together and encouraged her."

As someone who's never given birth before, Karissa was concerned she wasn't going to be able to handle the pain. "James was already very nervous to begin with when it came to labor and his wife being in pain," Dannielle told POPSUGAR. "Karissa told me she doesn't handle pain very well and kept saying it all throughout her labor. You would have seriously never known though because she powered through all of it like a freaking rock star. James was the best support system. He held her up, held her hand, but man, you could just see the worry all over his face through it all."

After Karissa was told that she was too far along in the labor process to receive an epidural, James's nerves hit an all-time high. "At the very end, she asked for an epidural, but when they checked her one last time, they said it was too late, baby was right there and time to push," she explained. "The dad was even more nervous, but once it came time to push, he really got it together and encouraged her and cheered her on. As soon as their daughter was placed on his chest, I think everything just hit him hard, all of the nerves and worry he was holding inside, the emotions of seeing his new daughter and being so proud of his wife really hit him all at once, and he stepped back and just let it all out."

Read ahead to get a look at James's and Karissa's beautiful birth story.

Related:
The Face This Dad Makes When He Sees His Baby Emerge During Childbirth Is So F*cking Accurate
Previous Next Start Slideshow
PhotographyChildbirthTouching Stories