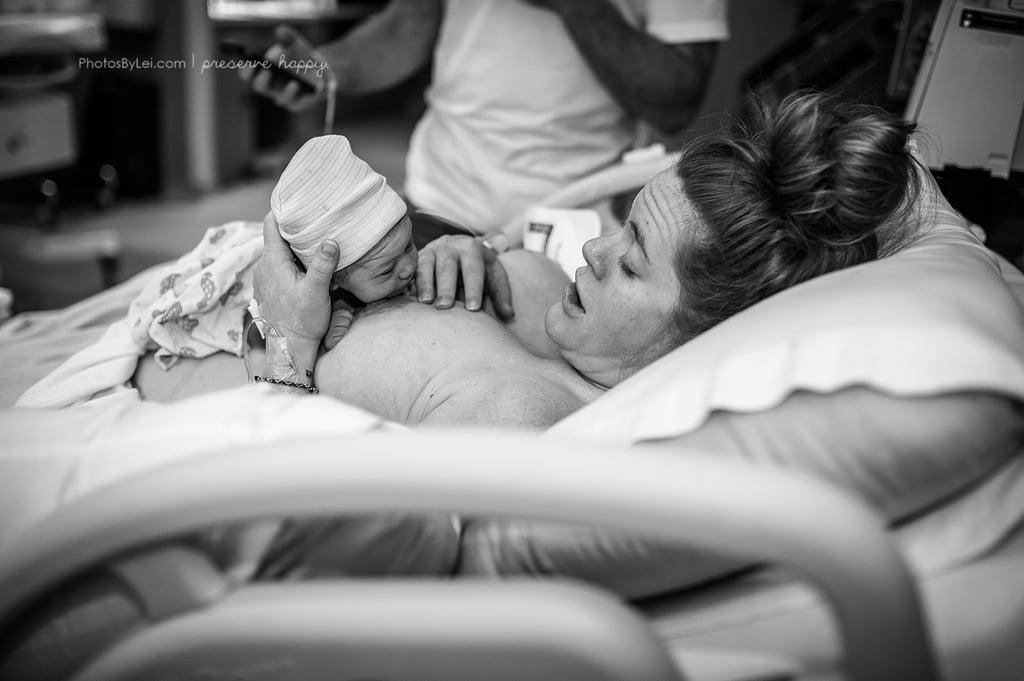 Before documenting her client's delivery, birth and breastfeeding photographer Leilani Rogers met with the mom-to-be to see if there were any moments in particular that she specifically wanted photographed during labor. For this expecting couple, the one thing that Jessica and Don didn't want missed was the breast crawl.

Breast crawling is when a newborn is placed on his or her mother's stomach and uses the scent of the nipple (as well as sight, taste, and touch) to find their way to their mother's breast and begin breastfeeding — by himself or herself at just minutes or hours old. Even though Leilani has been photographing births for over five years, she has only ever seen a newborn attempt to complete the breast crawl but has yet to witness any success — until she captured baby Harper's post-delivery journey for milk.

"It's a process that takes a lot of patience and many times, moms jump in and help baby," Leilani told POPSUGAR. "But Jessica was very patient and allowed baby almost a full hour to find the breast on her own."

According to Leilani, the hospital staff was also respectful of Jessica throughout the whole process, allowing Harper to latch before performing any exams. "To witness the connection baby made with mom over the span of that 48 minutes was fascinating," Leilani said. "She didn't fuss, just slowly but surely made her way to the nipple and latched on once she was in just the right position!"

In addition to the photos of newborn Harper independently crawling towards her mother's breast, Leilani also shared exactly what was going on throughout the miraculous process.

Babies
This In-N-Out Burger Newborn Shoot Will Have You Craving Fries in 3, 2, 1 . . .
by Murphy Moroney 6 days ago