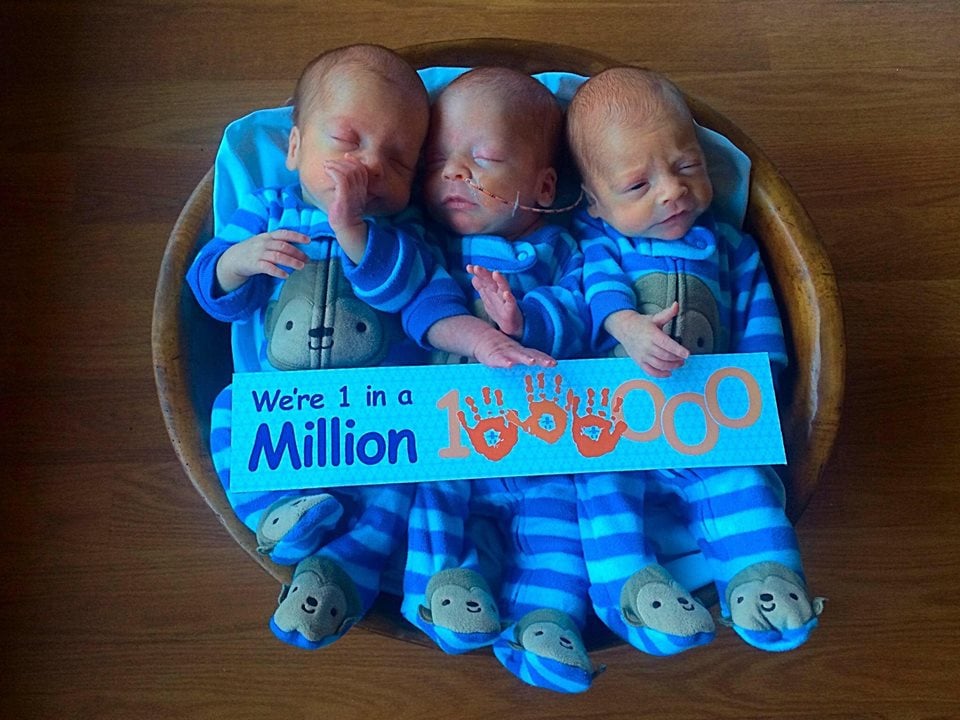 Talk about a rare phenomenon! Back in July, Jody and Jase Kinsey found out they were expecting spontaneous triplets, meaning there were no fertility drugs involved. Already the parents of 6-year-old son Jax, the Miles City, MT, couple took the news in stride. Jase's father is a twin himself, so the couple knew a multiple birth was a possibility. But when they discovered that the triplets were identical — they all shared a single placenta — their minds were blown, as there's approximately a one-in-a-million chance of it happening.

"I'm sure it's going to be tough," Jody said. "Especially when they get old enough to understand that people can't tell them apart."

The triplets, named Cade, Ian, and Milo, were born via C-section at 32 weeks on Dec. 5 at the Billings Clinic where Jody had been admitted a few weeks earlier. They weighed in at 3 lbs 13 oz, 3 lbs 11 oz, and 4 lbs 1 oz, respectively. Five weeks after the births, Jody and her mother are staying at a nearby Ronald McDonald House with baby Cade, while Ian and Milo continue to gain strength in the hospital.

"It's kinda almost overwhelming," Jase added. "When you think about when they get a little older, are they all going to play the same sports? Or are you going to go 50 million directions and be able to help all of them as much as you can. But I can't wait for that to come. I'm so ready."

Read on to see some adorable pictures of the boys!