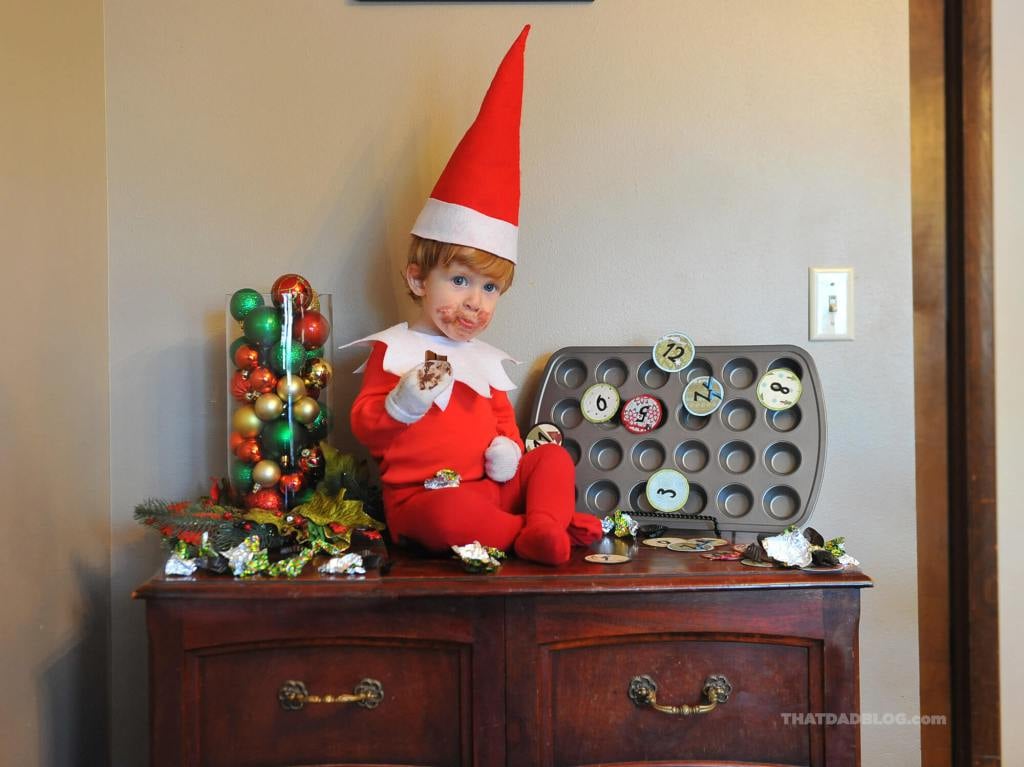 By now, your Elf on the Shelf has probably wreaked havoc on your home and made tons of reports back to Santa about your kid's behavior. Though your elf (read: you) may be getting a little tired — because honestly, how many places can he move around to in the same house? — the elf in the Lawrence home isn't even close to tiring out. Every single day, Rockwell the Elf pops up in a new place — like sitting atop the shower curtain rod or drinking maple syrup while lounging in the fruit bowl — but that's because he's no ordinary Elf on the Shelf. Rockwell is real.

Alan Lawrence, blogger at That Dad Blog and father of six, created the most adorable Elf on the Shelf journey for his kids last year using his real-life 4-month-old son, Rockwell, as the elf (Alan is no stranger to crazy-cool photo shoots, as he created an entire series of photos in which his son Wil can fly). The family had never had an Elf on the Shelf before, but Alan told POPSUGAR Moms he was always intrigued by the idea.

". . . One day someone told us that Rockwell looked like an elf and the idea came to me. What if a real life elf came to live with us for the holidays, and how would I react in real life to having it show up to live with us?"

After the photos of Rockwell went viral in 2015, Alan decided to continue the tradition in 2016 with then 15-month-old Rockwell and is hoping that he can compile all of the images into a children's book. This year, rather than take photos every day, Alan has videoed a 2-year-old Rockwell elf in action (see him covering the family's tree with toilet paper, eating all of the sugary cereal, and refusing to let anyone get some sleep).

Read through to see the pictures of Rock the Elf from years past and be sure to check Alan's blog, Instagram, and Facebook for more!

Related:
35 Elf on the Shelf Ideas That Will Make You and the Kids LOL
Previous Next Start Slideshow
Holiday For KidsParenting HumorPhotographyHolidayChristmasElf On The ShelfHumor

Mariah Carey
Mariah Carey Is Writing a Children's Book, and Obviously It's All About Christmas
by Kate Schweitzer 2 weeks ago