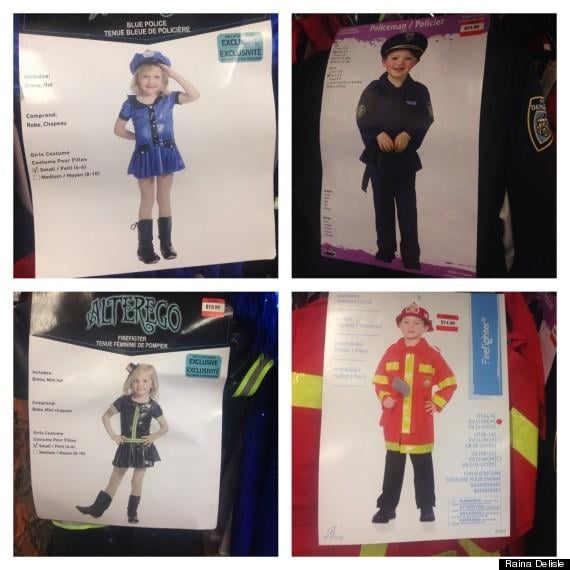 So your daughter wants to be a firefighter for Halloween. Great! A classic! That is, until you go to the store and try to find her a costume. Packaging for traditional firefighter costumes feature smiling boys dressed as firemen. Next to that is a version for girls with a photo of a rather sexy version of a firefighter on it — consider it the Samantha-from-Sex and the City version. Yes, costume companies aren't limiting their sexualized Halloween costumes to teens and grown-ups this year; they're sizing them down for toddlers.

British Columbia-based writer Raina Delisle experienced this firsthand when she took her daughter to their local store in search of a costume:

"We quickly located a firefighter costume for boys, complete with a bright red jacket, a traditional helmet, and an axe. The girls' version, on the other hand, is a skintight, short, shiny dress that's surely flammable. It includes a fascinator (in lieu of a helmet) never before seen on a real firefighter.

"The model on the package, who looks to be about the same age as my daughter, completes the outfit with heeled, calf-high boots — not ideal for running into burning buildings, or trick-or-treating, for that matter. The costume is for children 4 to 6, and it's one of several provocative costumes for the age group."

And it wasn't just the firefighter. There were a police officer, a pumpkin, and others that had interesting takes on girl versions of costumes (think corset-style ribbon lace-up backs and shiny, latex-like skirts). Delisle was not amused and took to Huffington Post to voice her concern. Her post went viral, and she became the de facto spokesperson against the sexualization of kids' costumes:

"What kind of message do these costumes send to our girls? While the boys have costumes that look like the real thing, girls are expected to dress up in spoof ensembles, thus suggesting they can't, or shouldn't, do the real job. The costumes are not only 'sexy,' they're also sexist."

Not only that, but because the costumes had bright, shiny accessories, they were especially appealing to tots. Delise's thoughts were heard, and the multinational company that owns her local store removed the offensive costumes from its stores.