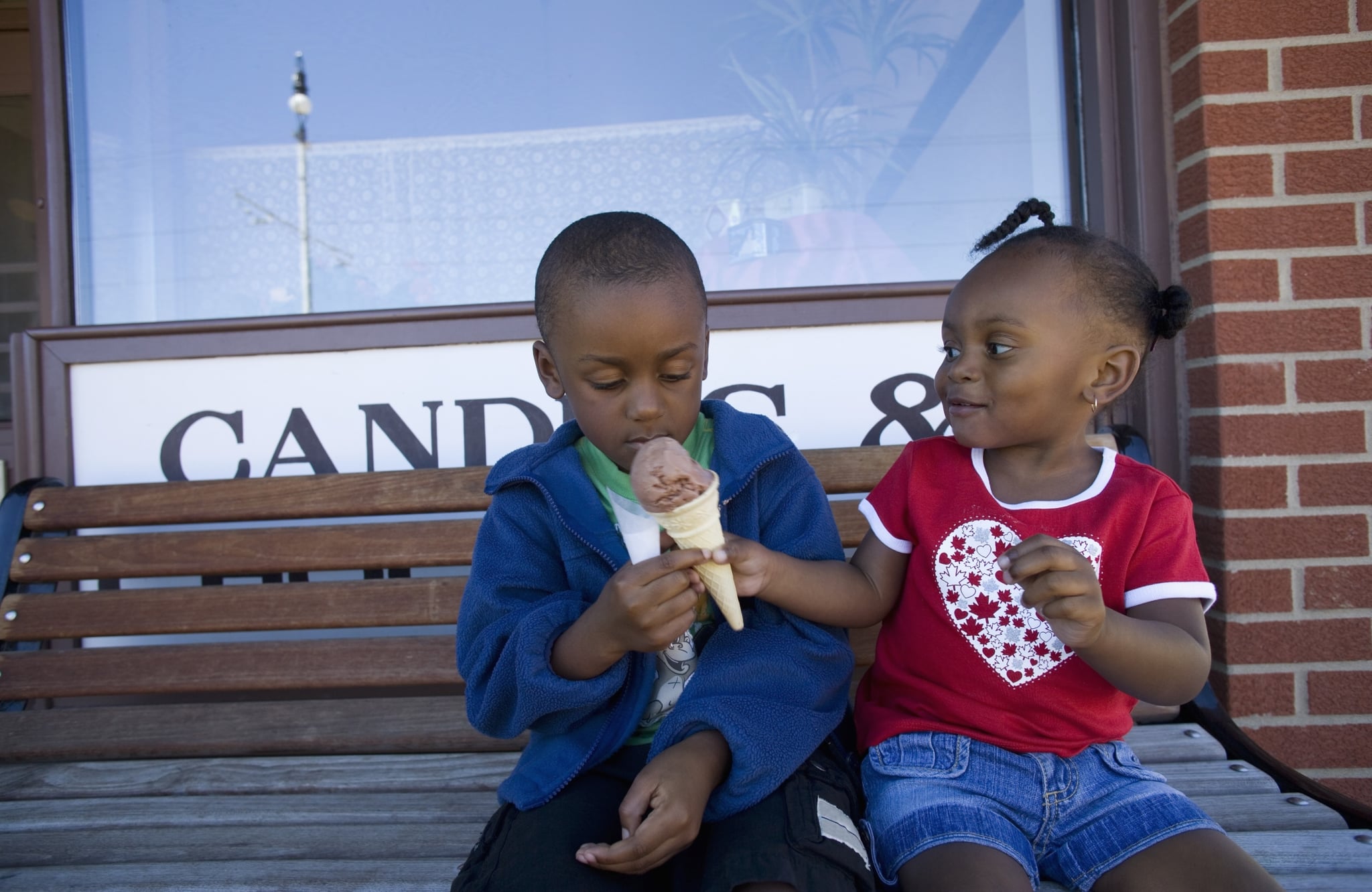 There is a sharing policy at my son's preschool. It's a parent-run co-op, so we have to have policies like this so that we will all handle situations relatively the same way. The policy is that a child can keep a toy as long as they want to. If another child wants the toy, they have to wait until the first child is done with it. We'll even "save" toys for the child if they have to go to the bathroom, go to the snack table, etc. so that it won't get taken before they're done. This applies to anything in the yard or school that can be played with, including swings and monkey bars.

At first, it didn't really occur to me to wonder why this was the policy. I just went with it, because that's the rule, and it didn't seem like a big deal to me. The kids all know the rule, so outside of maybe their first two weeks at the school, they don't throw a giant fit when you tell them, "You can have it when Sally Jo is done." But lately I've been noticing a totally different attitude toward sharing in other places we go, and I'm starting to really know exactly why this is the school's policy.

Here are a couple of examples of questionable sharing practices that I've seen recently. The first comes from a good friend of mine. (And I hope she doesn't mind that I use her story as an example.) She and her almost-2-year-old were at the park one day. He had brought a small car from home to play with. Another child, a little bit older, wanted to play with the car and was demanding that my friend's son give him the car. A typical toddler scuffle ensued, and the other mother told her son, "I guess his mom didn't teach him how to share." Never mind the fact that the car belongs to him and that when someone asks you to share, "No" is a perfectly legitimate response.

My second story happened one morning at the local rec center. Friday mornings they fill the gym with tons of Little Tykes climbing structures and those plastic cars they can drive around, tricycles, big balls, even a bouncy castle. Basically a toddler's dream play room. There's this one red car in particular my son really likes playing with, and the last time we went, he drove it around the entire hour and a half we were there. While most of the moms with smaller kids will shadow their kids as they play, my son is old enough now that I can sit on the sidelines and watch. From there I watched a mom whose son wanted to drive the car approach my son repeatedly, saying, "OK, now it's time for you to give him a turn!" Of course he ignored her, and eventually she gave up. There were a million other little cars for her son to drive, including one that was almost identical. Or maybe I would have stepped in at some point.

I don't agree with the approach of the mothers in either of these situations. I think it does a child a great disservice to teach him that he can have something that someone else has, simply because he wants it. And I can understand the desire to give your children everything they want; we all have it. But it's a good lesson for you both to learn that this isn't always possible, and you shouldn't step all over other people to get these things.

Furthermore, this is not how things work in the real world. In your child's adult life, he's going to think he's owed everything he sees. This is already happening in the next generation. I read a fascinating article about how today's teens and 20-somethings are expecting raises and promotions at their jobs for reasons like, "I show up every day."

If you doubt my reasoning, think about your own day-to-day adult life. You wouldn't cut in front of someone in the grocery checkout line just because you didn't feel like waiting. And most grown adults wouldn't take something from someone, like a phone or a pair of sunglasses, just because they wanted to use it. (Well, maybe some of you would. In which case, this post may not be for you.)

It's hard, as with so many things about parenthood, but let's teach our kids how to cope with disappointment, because it happens. And we won't always be there to fix it for them. Let's teach them how they can get things they want through diligence, patience, and hard work.

How do you feel about the concept of sharing where young children are concerned? I know you likely don't have a "policy," as I sure didn't before the preschool told me they had one. Now I notice a variety of different takes on the subject from the parents I see around. Makes me wonder if we need to be talking about this issue a little bit more.