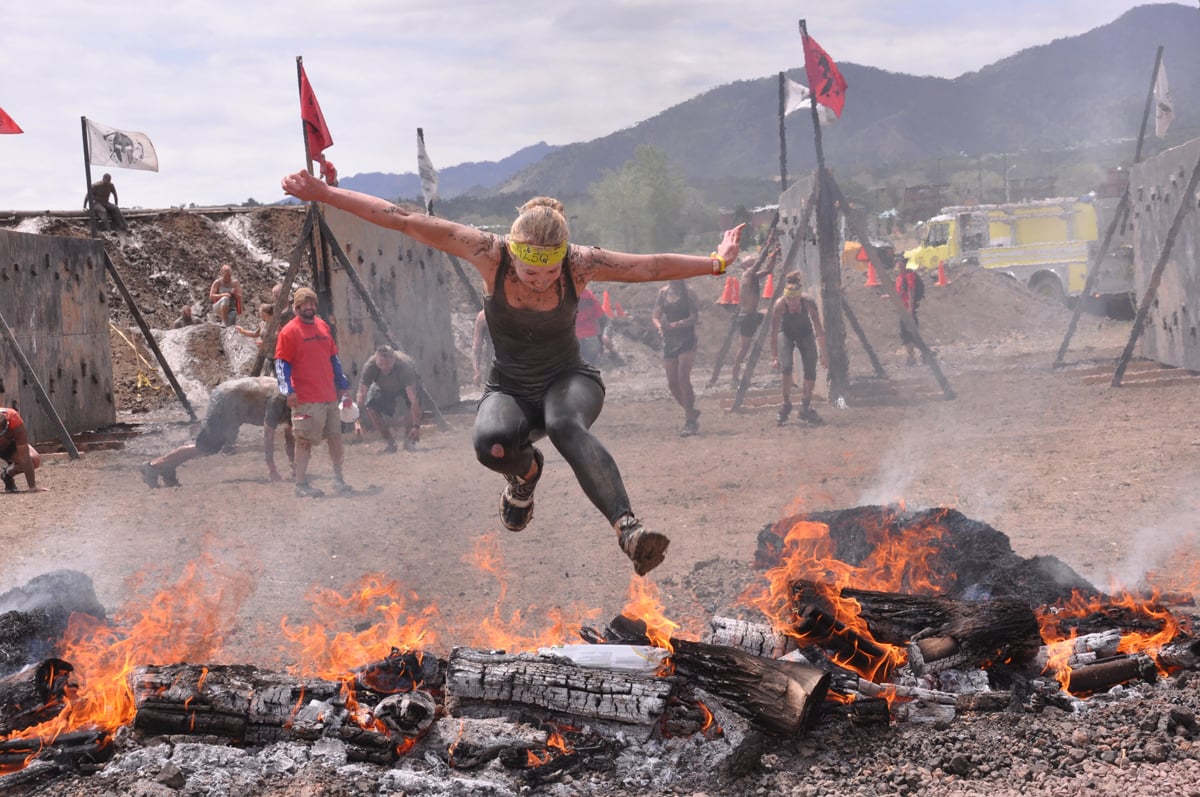 My path to becoming a Spartan started innocently enough, at a skinny-margarita-fueled dinner with some new mom friends last Winter. "I signed up for a Spartan Race in June," one lean and strong mom told us. "I think you guys should do it with me." In retrospect, she probably wasn't directing the comment at me. Three other moms at the table were and still are fitness instructors, all of whom love a challenge and have done multiple road races. I work out a lot (thank you, gym childcare), but the only fitness challenge I've ever done involved eight straight hours of yoga and Pilates for charity. Climbing a seven-foot wall, lifting boulders, and running more than eight miles? Not my thing. Yet some crazy synapse in my suburban mom brain was sparked. "I will totally do it," I told her. And so it began.

I spent the next few months slightly inspired, mostly terrified by what I had gotten myself into. I started training, adding additional strength classes and lots of running to my weekly workouts, but, as most moms know, life in general and especially with small children tends to get in the way of even the best-laid plans, and I'm not sure preparing to trudge through eight-plus miles of mud at 37 years old would qualify as smart thinking. Buying a new house and selling our old one certainly cut into my training time, and by the time my daughter's school let out for Summer break three weeks before the race, I knew I was going to have to get through it mostly relying on mind over muscle matter.

The day before the race, my team of five moms (12 kids ages 7 and under between us!) met up for a night of relaxation before the big race. Some of us were really excited (that would be the mom who recently completed her first half-marathon in less than two hours); some of us were extremely nervous (me!). We all knew we would have to stick together to make it through the grueling 26 obstacles, predicted 95-degree heat, and crazy mud brought on by two days of heavy rains right before race day. Conditions were not exactly optimal for a novice like me, and I had already decided that surviving might have to take precedence over finishing.

When we arrived at the starting line at noon the next day, I was anxious but optimistic. Despite what the thermostat said, it didn't feel that hot, and there were more than 4,000 racers of all ages and body types surrounding me. Surely anticipation had to be worse than the reality. I was both right and wrong.

Three-and-a-half hours later, I had trudged through almost three miles of quicksand-like mud up to my calves (fellow racers were losing shoes left and right); twisted my ankle badly jogging through the uneven terrain, making running the rest of the way almost impossible; traversed over countless walls; crawled under two fields of barbed wire; and lifted more heavy stuff (boulders, buckets of rocks, tires, etc.) than I thought possible. My shoes were filled with mud, I could feel epic bruises popping up all over my arms and legs, and my body was both as tired as it ever had been and filled with more adrenaline than I had ever experienced. And somehow, I made it to the finish line. My four team members and I held hands as we jumped over a line of fire (the easiest obstacle we encountered all day, yet the one my daughter was most impressed by), then ran across the finish line. I had to fight back tears, filled with too many emotions to identify. I was a Spartan, a warrior, and I was proud of myself.

A couple of days later, still unbelievably sore from the experience, I've been thinking about what inspired me to undertake such a daunting physical task at this stage in my life. In a word: motherhood. I did it because I needed to prove to myself that I was up for a challenge that had nothing to do with surviving another day with a 2- and 5-year-old's endless demands. I wanted to prove that I could still surprise myself while living a life that can often feel monotonous and repetitive. I did it because I wanted to feel camaraderie with other moms that had nothing to do with discussing sleep schedules or school plans. I did it because I wanted my daughter to be proud of how strong her mom is (she is). I did it because I wanted to feel proud of myself (I do). All moms are warriors, but sometimes, we have to step out of our comfort zones to remember it. I'm so glad that for one grueling day, I did just that.

Joe Biden
In Honor of MLK, Help Keep DC's Houseless Safe This Inauguration — Here's How
by Chris Roney 12 hours ago