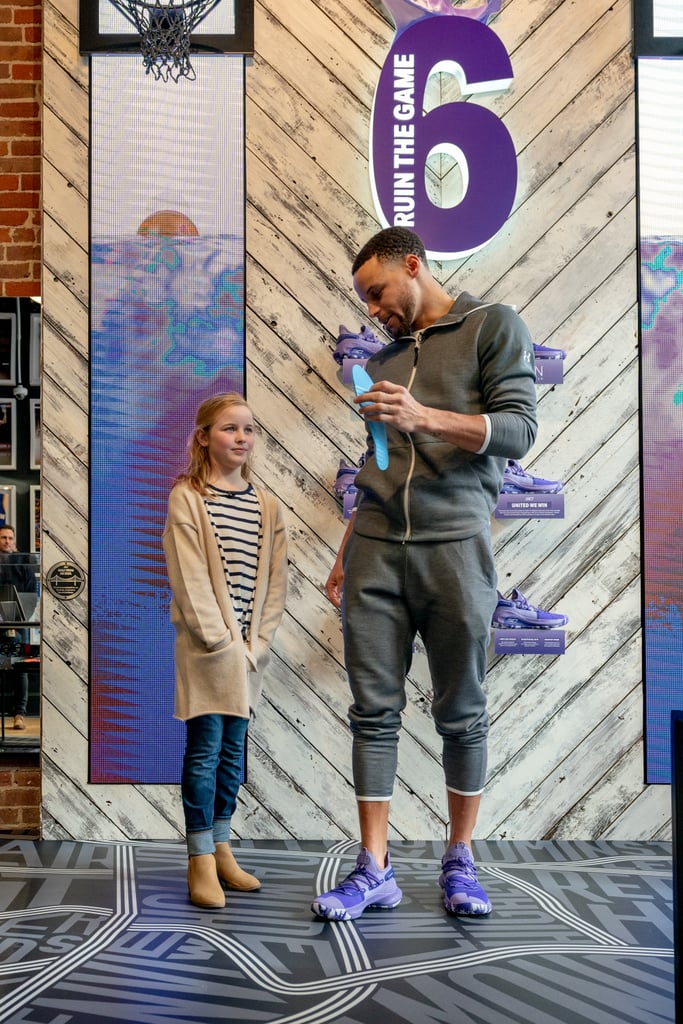 Riley Morrison is just 9 years old, and she's changing the game for female athletes. In November, the young girl wrote a letter to three-time NBA champion Stephen Curry expressing her concern over the lack of girls' sizes in his Under Armour kids' basketball sneakers. Not only did Steph write back to Riley about how he was going to "fix the issue," but they also worked together to design a new pair of basketball shoes for International Women's Day. On March 7, the day before the release of the new sneakers, Riley (who coincidentally has the same name as Steph's oldest daughter) joined the Golden State Warriors player to debut their hard work.

Riley and Steph worked together on the UA ICON Curry 6 United We Win purple shoe, which features a sockliner designed by Riley. The liner has inspiring quotes like "Girls Hoop Too," "Play With Heart," "Girl Power," and more. It's incredible to see Riley making such an impact for equality in the sports world at a young age.

"I was immediately impressed when I saw Riley's letter; that a 9-year-old girl had the courage to use her voice to call attention to an issue and keep us accountable," Steph said. "She was focused on the opportunity for ALL girls, not just herself. She's been an amazing catalyst for change — not only with my product but also with the entire Under Armour brand. She is inspiring, and wise beyond her years."

The brand reports that proceeds from the United We Win sneakers will fund a scholarship from the Curry Family Foundation and Under Armour "that will go to a young woman from the Oakland area pursuing an education in a STEM-related field." Ahead, see all the photos from the inspiring International Women's Day event, and the awesome purple sneakers.

Little Kids
Nick Jr. Is Hosting a Shark Week For Kids – And It Obviously Features Baby Shark!
by Murphy Moroney 3 hours ago