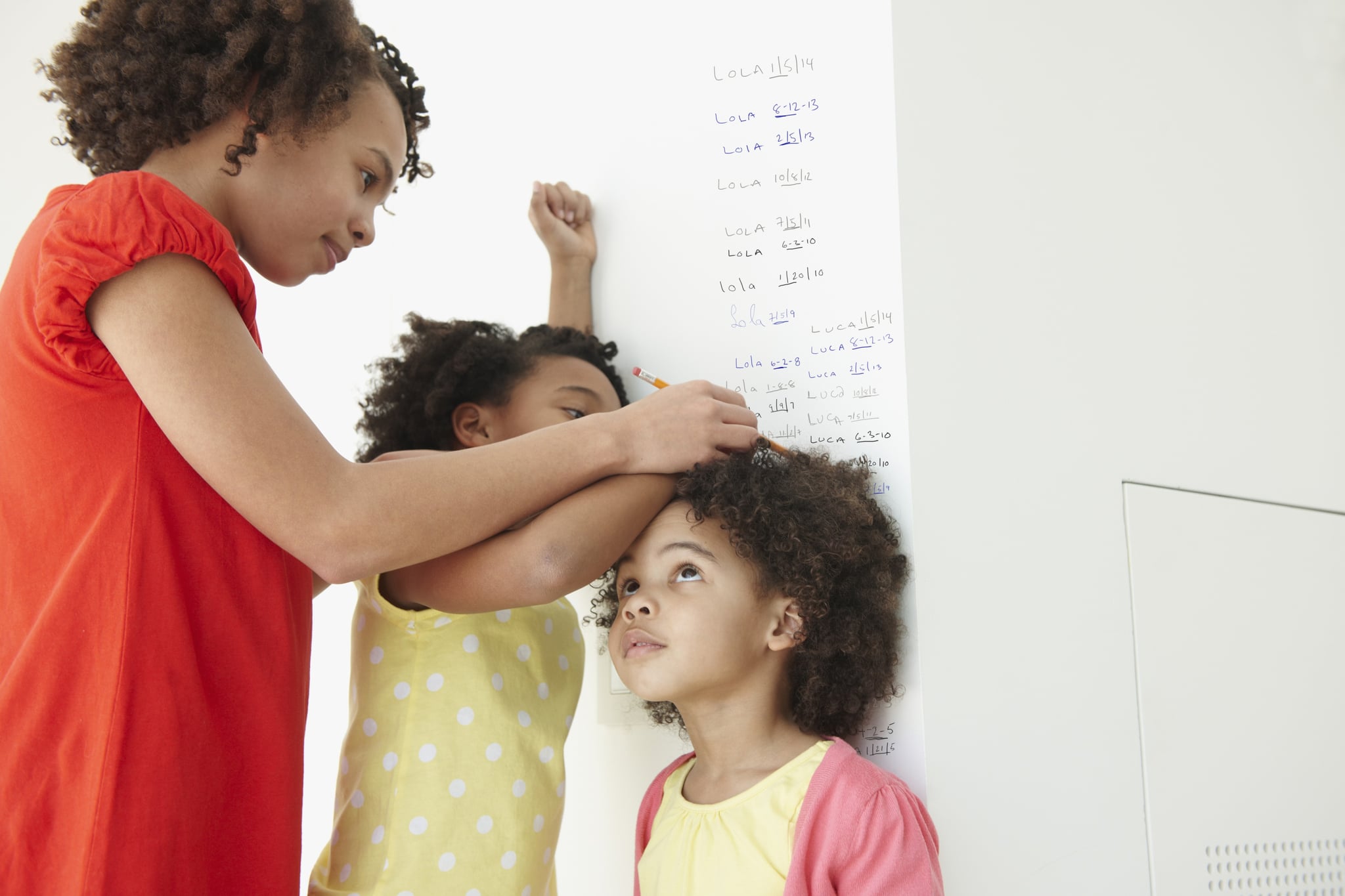 I took my toddler to the park last week and laughed — after five long months of Winter, she looked enormous in the baby swing, legs dangling down, feet encased in giant new shoes. I went to get my children's feet measured recently and realized they'd both been wearing too-small shoes for . . . a while. After the initial shock of being stuck in a moving swing, my daughter remembered swinging, and she grinned at me. Her look bore a certain self-consciousness of what we were all doing, here, in the park. Sunshine. Fun. You're old, I thought.

Every so often my kids grow, and every so often I notice. I love it. They grow like crazy, in fact. We tend to lament the pains of growth, when our babies lose their chubby, padded look, the disappearance of roundness and squeezability, of bellies and block feet, but I find my kids' ability to grow so big so fast a complete pleasure. Mostly because it's effortless. Unlike my houseplants, you don't even have to water your children and still they defy expectations! Another pleasure is that I don't actually have expectations for growth. Now that both are beyond the baby feeding stage, it no longer feels like my responsibility. Unlike their daily behavior, diet, school schedule, friendship problems, or emotional state, I don't have to worry about growth. So much of it is their own magical doing. One day the toddler says "tudd-le," and the next day she says "tunnel!" One day she says "bus," and the next she says "big, big bus!" This week, my 5-year-old discovered her first loose tooth. What could be more fun?

In the house where I grew up, there was a post that stood between our kitchen and family room in lieu of a wall, the kind of thing you learned not to walk into. We kept track of family height on that post. Pets, neighbors, friends, and cousins were also measured. I remember it as a kind of competition, seeing who was taller now, between my older sister and me, whom I eventually caught, but it was also a record, of where you once were, and who was here, or there, when. A small history.

Now we've lived in our own house for three years. My first daughter was just 2 when we moved in. We have our own wall of measure, and what's shocking about it, to me, is that they can grow an inch in a month. It doesn't really even matter when you measure them: they've always grown. But when you live with your children, it's very easy not to notice these changes. We don't remember to measure them for months. My only useful guides are how much they fill of the bathtub, doctor's checkups, or when pants get too short. What I do enjoy seeing more clearly is the pace of her friends' growth.

In Spring my daughter and her friends have their birthdays. That's just how it happened. Because you don't see them all the time, you can observe this growth. As they turn 5, and 6, it's obvious how much they've changed since we met them as toddlers. They are totally different people. They have serious little grade-school faces and bodies. Their eyes tell you they know who they are, now. They have a certain self-possession and feel embarrassment, now for doting parents. Probably the adult behavior is now more embarrassing than the kid behavior; we've crossed that line already.

I marvel at this growth because I can still see their toddler selves, those crazier, more exuberant forms, but they are in the process of becoming something that also seems entirely new. I know them, and I don't know them. Visually, they are who they were, but now they are small mysteries as they find new interests and define themselves away from preschool concerns. There's a little less herd behavior, as they try on themselves. I like to watch them and wonder what they'll be like in another five years, as they grow up together. From middle age, it's hard to imagine or remember that kind of radical growth. It makes children seem like a source of incredible power.

All to say kids are more satisfying, in growth, than houseplants.